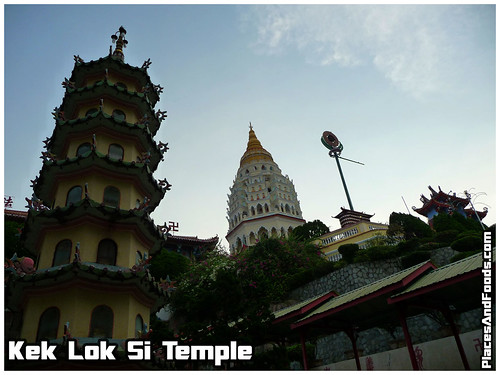 A short history of Kek Lok Si as below from Wikipedia:

The construction of the temple began in 1890 and was inspired by the chief monk of the Goddess of Mercy Temple at Pitt Street. With the support of the consular representative of China in Penang, the project received the sanction of the Emperor Guangxu, who bestowed a tablet and gift of 70,000 volumes of the Imperial Edition of the Buddhist Sutras.

The primary benefactor of the Kek Lok Si Temple in 1906 was none other than Kapitan Chung Keng Quee.

In 1930, the seven storey main pagoda of the temple or the Pagoda of 10,000 Buddhas, was completed. This pagoda combines a Chinese octagonal base with a middle tier of Thai design, and a Burmese crown; reflecting the temple’s embrace of both Mahayana and Theravada Buddhism.

In 2002, a 30.2m bronze statue of the Kuan Yin was completed and opened to public. The statue is located on the hillside above the pagoda. – Wikipedia

The time we there, they were constructing a building surrounding the bronze statue of Kuan Yin. My first visit was in 1980s. The temple did multiple renovations and its much nicer now than it used to be. A must go place if you visit Penang.