Kuala Lumpur has never seen so many football fans for such a short time. The city is lively, packed with football fans from all over Asia. I bet hotels are all fully booked this whole week for only one reason. Football Fever in Kuala Lumpur Malaysia! It is reported that hundreds of Arsenal fans flocked to Kuala Lumpur from Indonesia and Singapore. No one could guess that football matches could help tourism like this. There will be 3 English Premier League teams (Arsenal FC, Liverpool FC and Chelsea FC) playing Malaysia team within 10 days and the Arsenal FC plays the first match.

It has been years since I went to see a football match in the mighty Bukit Jalil Stadium. The match was scheduled to play at 8.45pm (+8 GMT) and by 5.30 pm the traffic jam has already started. Since Rachel didn’t want a piece of the football goodness, I went there alone. The atmosphere outside of the stadium was phenomenon. Fans were getting ready with their supporting team jersey cheering and taking photographs. Some were seen helping each other wearing bandanas as well as getting some food before going into the stadium.

I took my time checking on the right gate to enter. There were security personnel and police to check all the bags, no water bottles, food or umbrellas were allowed. There were also food stalls available inside the stadium.

I didn’t buy the best seat for the Arsenal match, I bought the cheapest ticket for RM 58 (US$ 20). It is also free seating so it is first comes first serve basis. The fans were already there, even 3 hours before the match time. Some of them were busy taking pictures. While there are also some people who got lost in the stadium. With the loud atmosphere inside the stadium, sometimes you need to stand up to be seen. Like I mentioned earlier, there are hundreds of traveling supporters from Singapore and Indonesia. The Singapore Gooners can be seen from far with their banners. 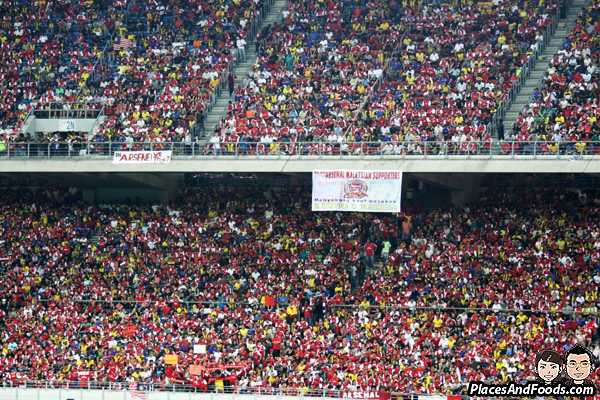 With an estimate of 60,000 football fans in the stadium, everyone was getting anxious and ready for the big match. As Jack Wilshere walked out to check out the pitched, the fans roared! Same goes to the Malaysian team head coach, Dato Rajagobal. He was seen watching on the pitch with his mobile phone as the fans cheered on him. 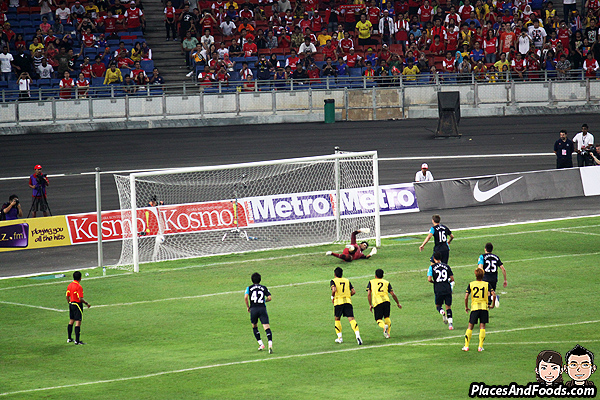 The game started soon after, with Arsenal took the lead with a penalty. The goal rocked the crowd.

It was a moderate game given the fact that Malaysia is playing neighbour country Singapore for the World Cup 2014 Asia Qualifier next week so the coach rested quite a number of first players. Arsenal thumped Malaysia 4-0 at the end of the day and the Arsenal fans enjoyed it. It was an amazing experience for the fans to see their favourite team in action and I believed that it will be one of the most memorable experiences for them. It was estimated to have 60,000 football fans in total for the Arsenal game. I enjoyed the game by myself and I managed to chat with a few high school kids who saved up for the game. I caught up with my friends after the game and I took my time to go home. I reached home almost midnight and it was tiring.

I will be watching the Liverpool game on Saturday and I advise football fans to go there at least 3 hours earlier. With the tickets sold out, expect to see more than 80,000 fans throng the stadium this Saturday. Please be early and try to take public transport like LRT instead of driving there alone. Plan your journey and see you all on Saturday!

Lastly, thank you Arsenal FC for coming to Malaysia and gave us a fantastic experience!

4 thoughts on “Arsenal vs Malaysia 2011 Experience: Football Fever in Malaysia”