It is their first time coming to play a match in Malaysia. However for their fans, this is a dream! Being a football or soccer fan, I supported Liverpool FC since 1994. After a 17 years wait, finally I got the chance to see them play live in front of my eyes.

The game was on Saturday 5.45pm, odd hour for a football match in this part of the world.  Instead of parking at the stadium, I parked at Endah Parade shopping centre. It is 15 min of walking to the stadium.

Since I watched the Arsenal FC vs Malaysia XI game a few days ago, I learnt my lesson. I rather going to the stadium early than stuck myself in traffic jam. 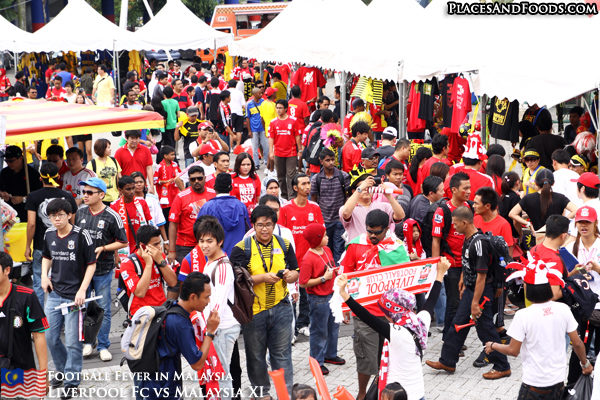 Well, the crowd has already built up outside the stadium. Most of them decided to take public transport like STAR LRT (light rail transit). There were fans singing outside the stadium and for some reason, I decided to go into the stadium first instead of hanging out outside. I wore a vintage Adidas Liverpool Away Candy shirt from the 90s. I bought it in a collector shop in Kowloon Hong Kong recently. The jersey is made in UK. 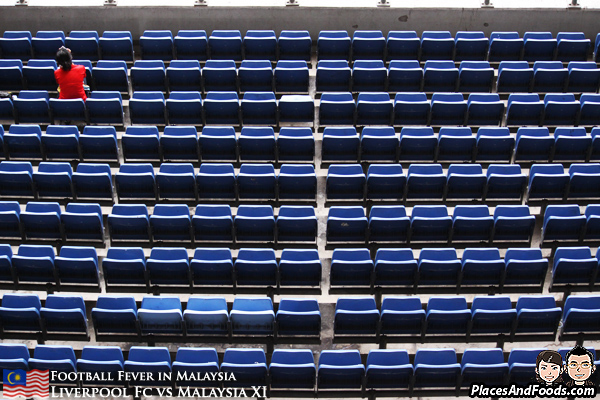 The stadium was still quite bare when I went in. Only a few thousand fans were there. I was told that 84,000 tickets were sold out, guess most of them were latecomers. The Liverpool players went into the pitch early. Most of them wanted to see the crowd as they had a great “Meet the fans session” in Pavilion KL. Jay Spearing was walking alone around the pitch. 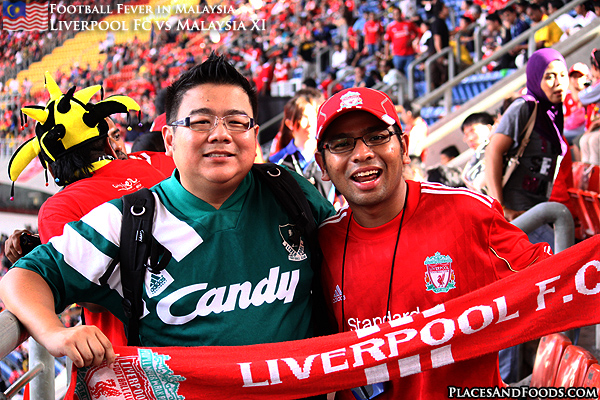 I met a few mates from Penang. I took a picture with one of them, friendly fella. Most of the Liverpool fans were quite “matured” and they brought their children to watch the game. It was like a family outing. The stadium started to fill up with an estimated of 80,000 people. The fans started to cheer, sing and dance if they could. Some even brought their own banners. If not mistaken, Standard Chartered Bank actually sponsored a huge Liverpool Home jersey for the game. 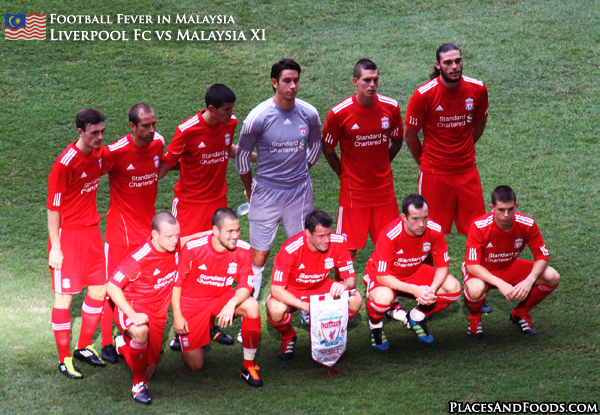 There were a few missing stars for the Liverpool FC, most notable injured captain Steven Gerrard, Pepe Reina and Luis Suarez. King Kenny Dalgish was not around too as he flew back to UK to sign England midfielder Steward Downing.

The first half was pretty sloppy with both sides making a lot of mistakes.

Closing to the end of the first half, Malaysia XI levelled 1-1 with a screamer via a dead ball situation outside of the box. The magnificent free kick sent the crowds to the roof. Safiq Rahim the captain scored. 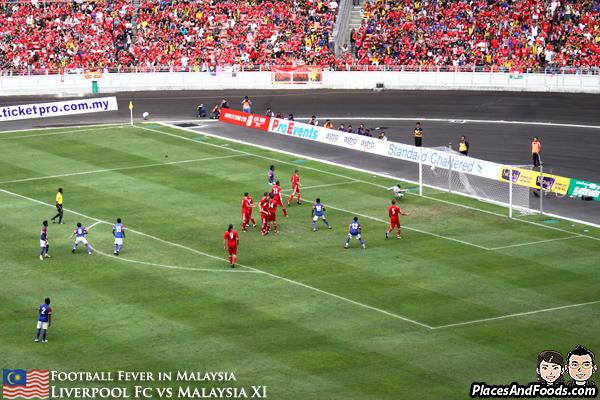 In the second half, Malaysia XI started well but they were caught with two goals by Ngog and one from Maxi Rodriquez. However, Safee Sali of Pelita Jaya managed to score two quick goals. At that time, everyone hope that Malaysia XI can level back or even beating Liverpool FC. However, the hope was dashed as Maxi Rodriguez and Dirk Kuyt wrapped up the game during injuring time with the end result for the game is Malaysia XI 3 and Liverpool FC 6.

The nine goals thriller game brought excitement to fans. The atmosphere in the stadium was electrifying! 80,000 fans then sang “You never walk alone” in the stadium. I believe Liverpool FC had never seen such a reception in their history. It was an entertaining match overall and together with 84,000 other football fans in Stadium Nasional Bukit Jalil, I would like to say I enjoyed the game and “You never walk alone”!