It was one of the most important evenings in Malaysia’s sporting history. It was once in a lifetime chance for Malaysia to earn the nation’s first Olympic Gold Medal. It was the London 2012 Olympic Badminton Men Singles Final, World Number One Lee Chong Wei against China’s Lin Dan. It was a dream final match for Lee Chong Wei to revenge his lost in Beijing 2008. 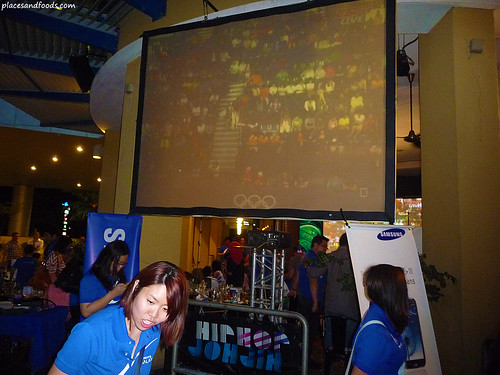 The big projection screen in Laundry sponsored by Samsung.
Lee Chong Wei as the ambassador of Samsung Malaysia, the viewing party was held at The Laundry, The Curve. Finger food and drinks was served during the event with a few big screen projectors. There are also three prizes available for lucky draw that evening which includes a Samsung Galaxy S3. 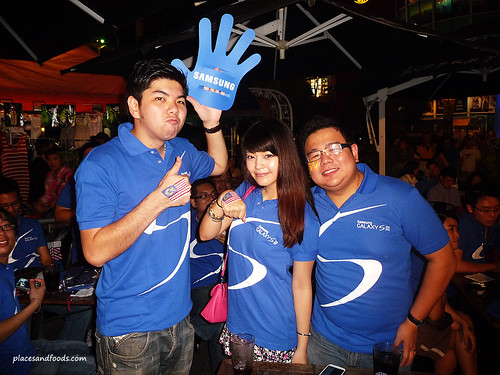 It’s me with other bloggers. From left, Ah Bok from Taufulou.com and Anna from Annna.net.
It was like a gathering of friends and bloggers. Many of my friends were there and we had great time catching up. 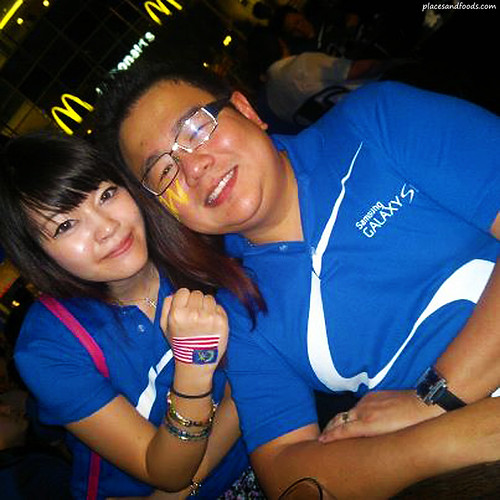 One of my traveling partner, blogger Anna!
The game was intensifying as there was a big crowd outside the restaurant watching the big screen. Lee Chong Wei won the first game with ease and lost the second game. The rubber game was a decisive one. Many remembered how Lee Chong Wei was beaten in Beijing four years ago but it was not the same case this time around. Lee Chong Wei fought back and managed to lead to 19 points. Blame it to the luck or anything else as Lin Dan managed to win the game with a decisive long shot by Lee Chong Wei. It was a hard fought battle, both are equally good but there must be only a winner. Lin Dan was the winner and Lee Chong Wei did his best.

It was only after the game, he revealed that he only have two weeks of training prior to the Olympics after his ankle injury. Even with limited training session, Lee Chong Wei looks like having his top form battling another top form Lin Dan.

The nation mourned the loss but welcomed a beaten hero. Lee Chong Wei loss was a hard reality and it was clearly shown he had done the best.

Lastly, it was a great event sponsored by Samsung and also its relentless support towards the national badminton star chasing our nation’s first gold medal.

We from PlacesAndFoods.com would like to congratulate Dato’ Lee Chong Wei for its success. He might have lost the battle but he won the hearts of our nation. He is a national hero.