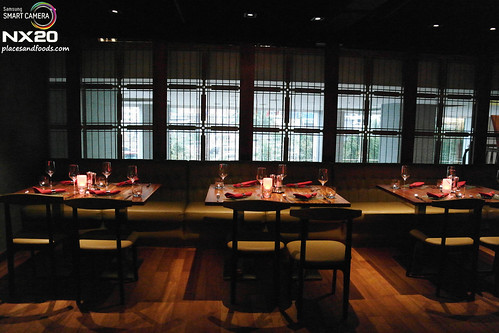 The Grill 582 is a western restaurant in Best Western Premier Dua Sentral. I like the kitchen open concept where guests can watch the chefs in action. It is a similar setting like Hell’s Kitchen but minus the negativity. The name 582 came from the Lot number of the hotel which was Lot 582. 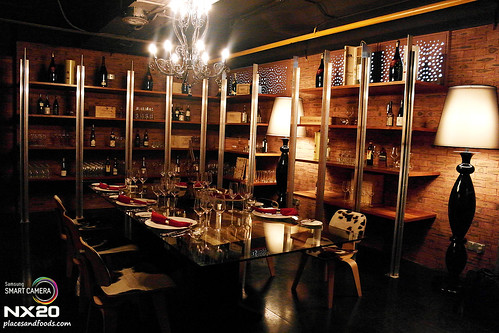 Grill 582 private room.
I reviewed Grill 582 at that time but they were still in midst of preparing their menu for the soft launch so it would be unfair for them to judge them at that time. Hence, I waited for a proper timing for another review, their MIGF 2012 menu. Back then, I met Chef Jaffery Othman, the creator of Grill 582 MIGF menu. 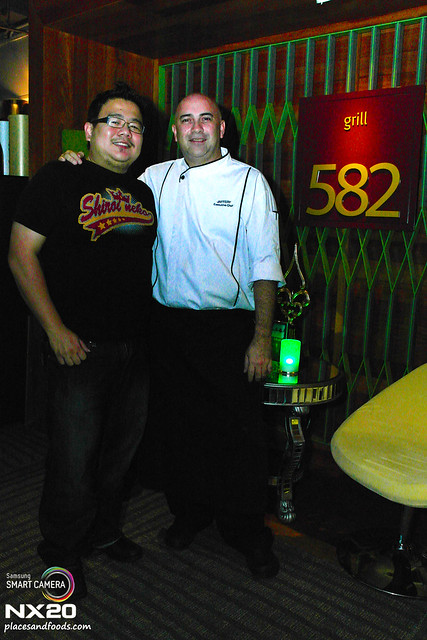 Chef Jaffery Othman and me.
Chef Jaffery Othman promised me that his MIGF 2012 menu would be exciting. The Malaysian born chef was raised in UK and cooked for VIPs like Queen Elizabeth II, Kylie Minogue, Tony Blair and Manchester United Football Club.

Chef Jaffery has also received nominations for best western cuisine by the Asia Platinum Awards 2007 and the most outstanding cuisine in the 2008 edition of the Malaysia International Gourmet Festival. 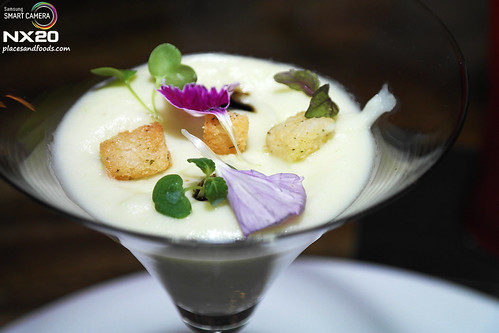 ‘Vichyssoise’ was a classic French thick soup which is normally made from puréed leeks, onions, potatoes, cream, and chicken stock. This version was interestingly cooked and blasted with nitrogen to create a softer texture or puffy light texture. The Leek ash was grilled with olive oil. This was light and enjoyable and the micro herbs were good balance. 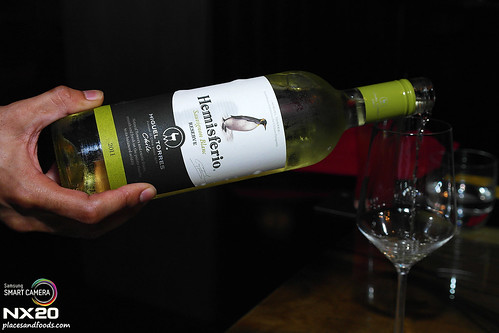 Best paired with the ‘vichyssoise’, ambrosial. 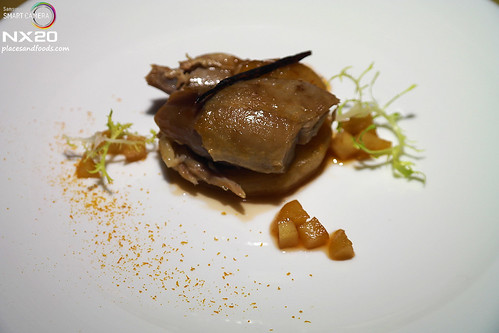 Confit of Duck was another French dish and it required a long process of preparations. Granny Smith is not a person but green apple originated from Australia. This starter was all about balancing the flavours. Interesting enough the poached Granny Smith carried a sweet and sour taste and hints of citrus while the duck confit is cooked with sea salt creating a salty flavour. Having them together created a harmony of flavours of sweet, sour and saltiness. 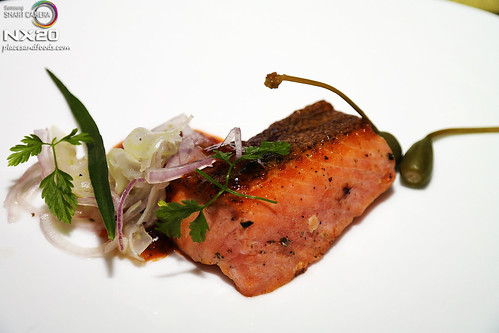 It was my first time having Tasmanian Ocean Trout and little did I know it is orange in colour. There was disbelief in our face when the trout served to us was in orange in colour. Most of the common ocean trout were white in colour. After the explanation from the chef and also some research on the Internet, the Tasmanian Ocean Trout is a member of the salmonid family. This was the best ocean trout I had for a very long time. Perfectly cooked, not over cooked or under and the best part was the fish was still tender and juicy. The add more flavours, it came with ‘ketchup’ dressing, fennel salad and olives. This was memorable. 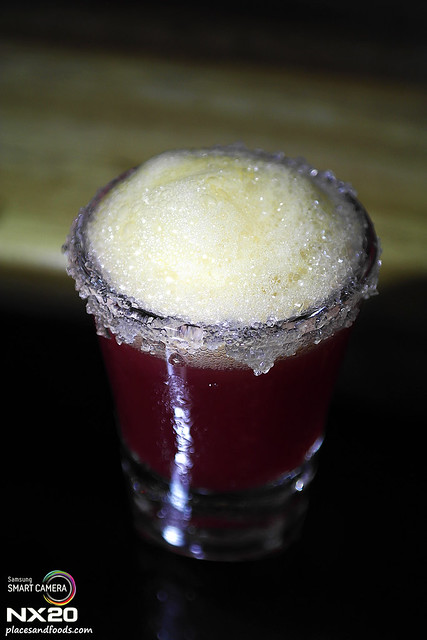 We had a short commercial break with their palate cleanser which was the mixed berry shooter. This shot of mixed berry was topped with orange foam and there were bits of sugar on outer layer of the shot glass. It was a refreshing shooter with a bit of sweetness, right on time before the Main dish. 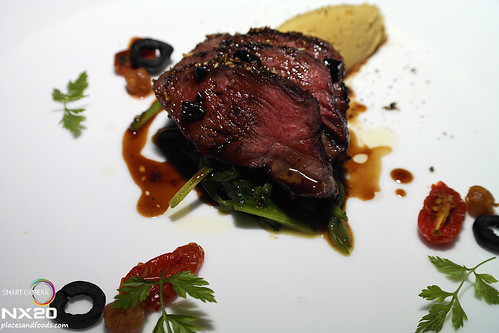 The choice of using rump was a surprise. Chef mentioned that the rump is usually under rated and you can get more bites with the rump. The rump was cooked to tenderness to our surprise. The Eygptian influenced Dukkah spice was made from chickpeas and missing the sesame paste so it had a slightly rough texture. I thought the spinach had a strong flavour but it didn’t overwhelm the lamb.  This was delectable and best paired with the wine. 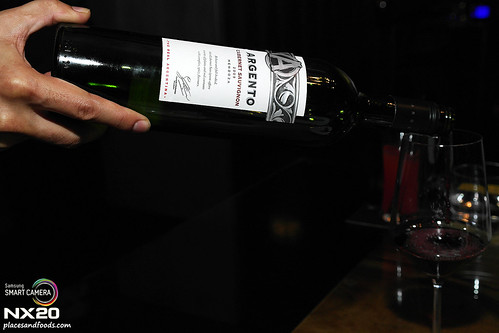 If you take the wine itself it has the end taste of bitterness, correct me if I’m wrong. However if you paired it with the lamb, it completely wiped out the bitterness and brings out the flavour of the wine. 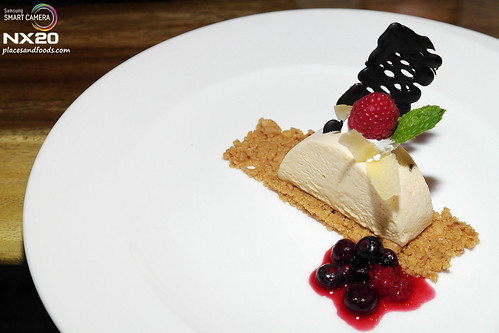 It didn’t surprise to have a light dessert to end the dinner. We had two heavy dishes before this and it was a great way to end it with light smoked Idiazabal chilled soufflé. The Idiazabal is a Spanish cheese. The soufflé was light and best compliments with the sweet berries. 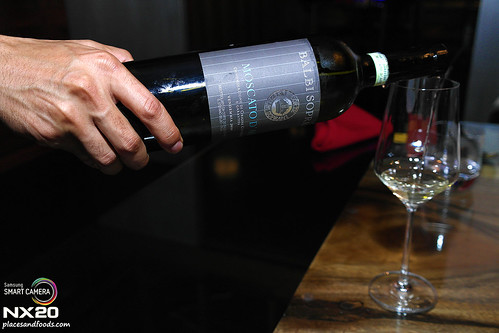 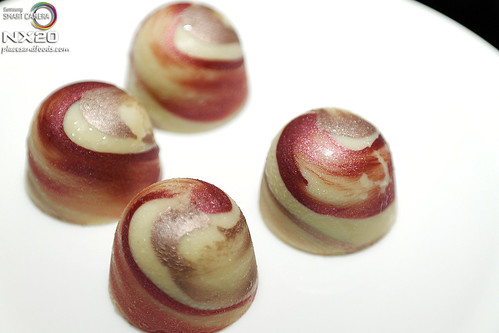 Petit Fours was a simple white chocolate dessert with jelly and chocolate as filling. This was sweet and soft on the inside. 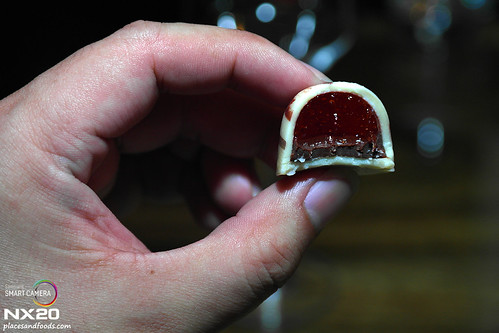 If you noticed, Chef Jaffery loved to cook his dishes with fruits. He told us that meat and fruits were great combination.

Overall, we loved the unique taste of his creations. It was an exciting festival menu indeed. As one of the newcomers of MIGF, Grill 852 had a very promising menu with great harmony of symphony. With the theme of MIGF 2012 as the classical chef, Chef Jaffery had put up a combination of his classical dishes with his interesting twists.

Raise your glasses to a 10% discount on selected wines and champagne.

Enjoy a 20% discount on all cocktails and mocktails.

Present your Grill 582 dining receipt to enjoy a 50% discount on Bhuvana’s massages, from 1st October until 31st December 2012.

Spend a minimum of RM 600++ during the festival and get a free bottle of champagne on your next visit – valid from 1st October until 31st December 2012.