It has been more than a year I have watched Lone Ranger trailers. From the trailers, the one thing impressive I can spot is the Red Indian Johnny Depp. Well, the Lone Ranger,is not impressive and it spills over to the movie too.

After disappointed with World War Z, Lone Ranger fares worst, one of the worst movies of the year.

A weak character portrays as a hero deems to fail in movies. Moviegoers love strong heroes or sometimes funnyhero  but never a weak hero. Armie Hammer never seems to be the lone ranger. In fact he should be hammered away from his cast. His stubbornness and his believe in “justice” in the movie kept reminds the audience, how useless and irritating his character is. 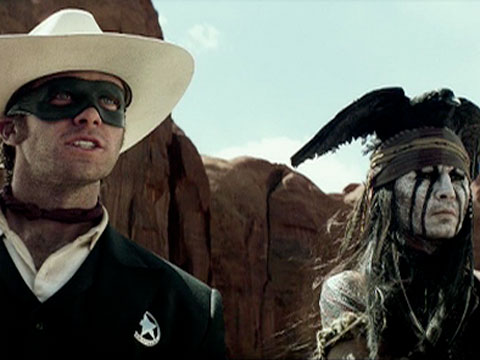 The villain is a monster at first and human at last. Somehow the villain turns soft at the end of the movie without any reasons. While the story isn’t fantastic and easily predicted, the movie is often draggy at times and you will be looking at your watch when the blardy movie is going to end.  The ending wasn’t that great anyways!

The only highlight in the movie is the humorous Johnny Depp as Tonto. He is impactful but most of his antics in the movie are rather similar to Pirates of the Caribbean. Same old trick and same of old jokes, we seen it too much in the pirates and it is like a dejavu in Lone Ranger. It looks like even the marvellous Johnny Depp cannot save the Lone Ranger this time. He will be a loner for sure and this looks like another Disney’s flop.