Sydney is the second largest city in the world by land mass after Greenland. Like any other metropolis, bridges are essential to lessen the traffic in the city. Behold the Sydney Harbour Bridge, the largest of its kind in the world.

The idea of building the bridge goes back to 18th century and it is finally completed in 1930s after many failed attempts. There were six lanes for cars and two lanes for trams and now it is fully converted to 8 lanes. It is still the widest for a steel bridge up to today.

The Sydney Harbour Bridge is a steel arch bridge across Sydney Harbour that carries rail, vehicular, bicycle and pedestrian traffic between the Sydney central business district (CBD) and the North Shore. The dramatic view of the bridge, the harbour, and the nearby Sydney Opera House is an iconic image of Sydney, New South Wales, and Australia. The bridge is nicknamed “The Coathanger” because of its arch-based design.

Under the directions of Dr J.J.C. Bradfield of the NSW Department of Public Works, the bridge was designed and built by British firm Dorman Long and Co Ltd of Middlesbrough and opened in 1932.[3][4] The bridge’s design was influenced by the Hell Gate Bridge in New York. It is also the sixth longest spanning-arch bridge in the world, and it is the tallest steel arch bridge, measuring 134 metres (440 ft) from top to water level.[6] It was also the world’s widest long-span bridge, at 48.8 meters (160 feet) wide, until construction of the new Port Mann Bridge in Vancouver. – Wikipedia.org 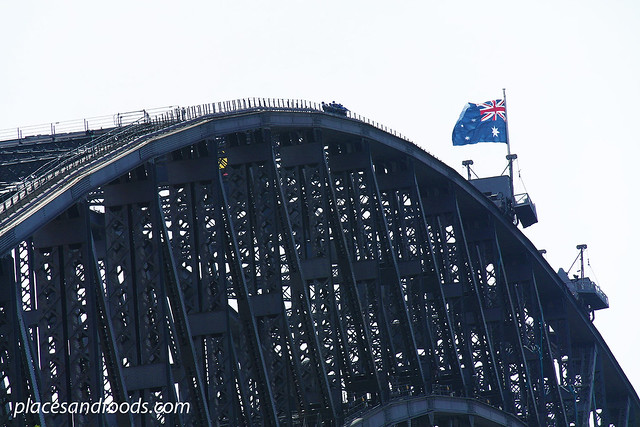 Like many other iconic structures, there are always people wanted to achieve the bragging rights, make it at the top of it (the arch of the bridge). Like the French’s Spiderman (Alain Robert) or the new Russian duos, scaling structures often give self-satisfaction for achievements. There were many illegal climbs to the top of the Harbour Bridge before it is legalised. Some of the climbers even left cans of beers for others to enjoy at the top of the bridge. They did it without any harness.

In 1998, the idea of legalised the climb comes true. Now, it is one of top things to do in Sydney. 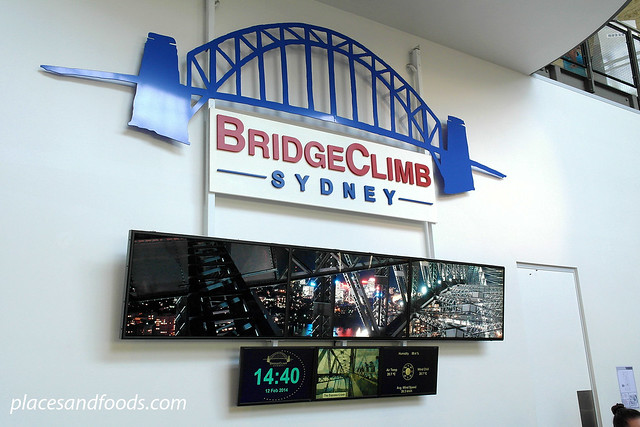 For the climb of your life, there are options of climbs available. Most of the climbs take at least 2 hours with the discovery climb taking more than three hours. The briefing takes around half an hour with climb preparation, gear and equipment briefing and testing.

You might read about the over 1000 steps but do not fret, the climb is very gradual. There is an American lady celebrating her 71st birthday with the climb. A few more in the group comes from other parts of the world.

The most important thing about the climb is the alcohol content in your body. If you had quite a couple of drinks a night before you might fail the breathalyzer. They are extremely strict with this due to safety and security reasons and they have the rights to decline your climb.

On the softer note, there is a climb leader will brief you from “a to z” about the climb and the equipment we using like the radio walkie-talkie and the harness.

The climb leader is a humourous guy named Adrian. He makes things easy for the group and never lacked his responsibility as the leader as well as taking care of our health being.

We are not allowed to bring anything except the watches or the spectacles. Thus, everyone must wear the jumpsuit provided and only Adrian has the camera. He will take care of the pictures and trust me he knows his stuffs for the best angles and the best places to stop for pictures.

When everything ready to go, we cling our harness to a few kilometres long steel cable. The cable goes all the way from the start and to the finish. 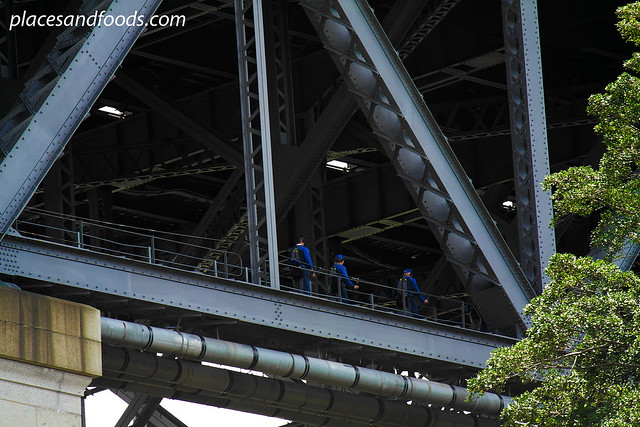 The climb or the walk starts at beneath the bridge. There are plenty of stops as Adrian explains the history and story of each part of the bridge. Some of the stop includes drink fountain for quick refreshment. At any point of the climb if you feel uneasy, Adrian will do the necessary. For example a couple from Europe wanted to go to the loo urgently, Adrian contacted the team to escort them and joined the next team. 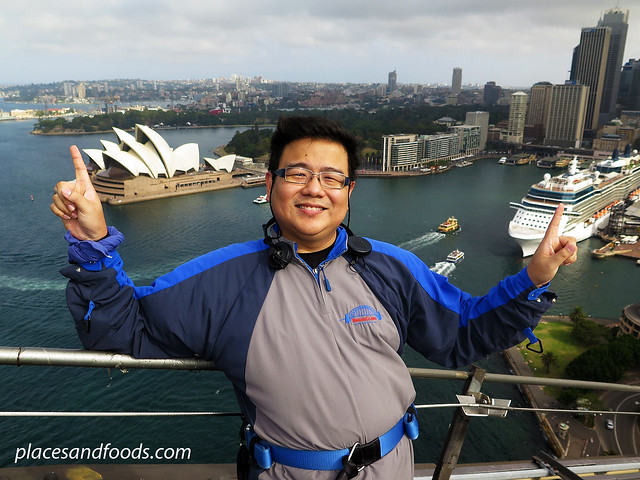 From the blue granites to the measurement of the bridge, Adrian knows everything. He is the walking dictionary or the walking radio of the Harbour Bridge. He makes his story short, simple and funny as the group smiles all the way up to the top and back. He is a charmer. 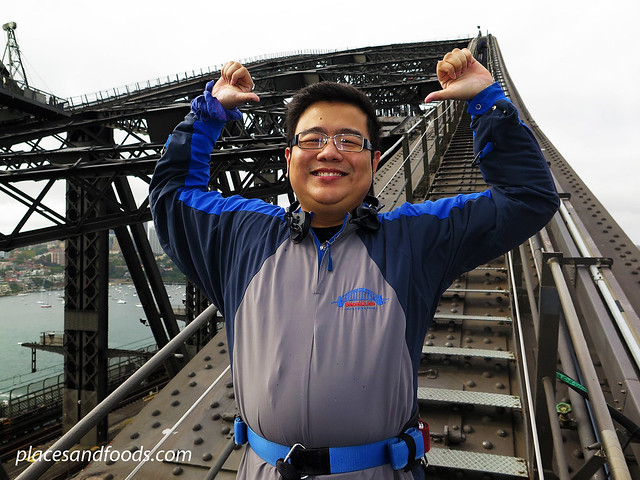 There are a few photo opportunity on top of the arch. 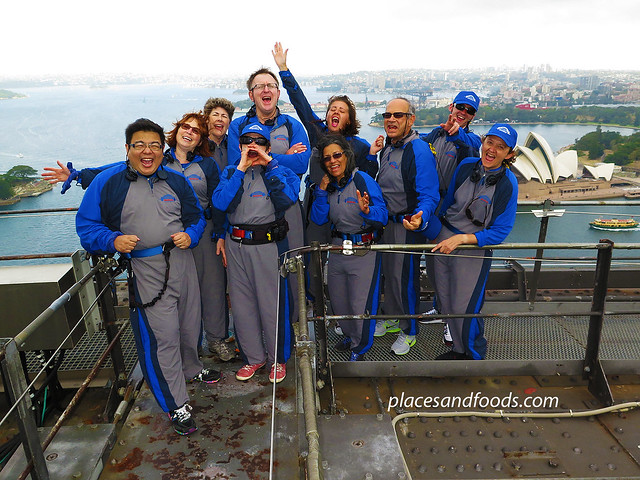 With the mates from around the world! 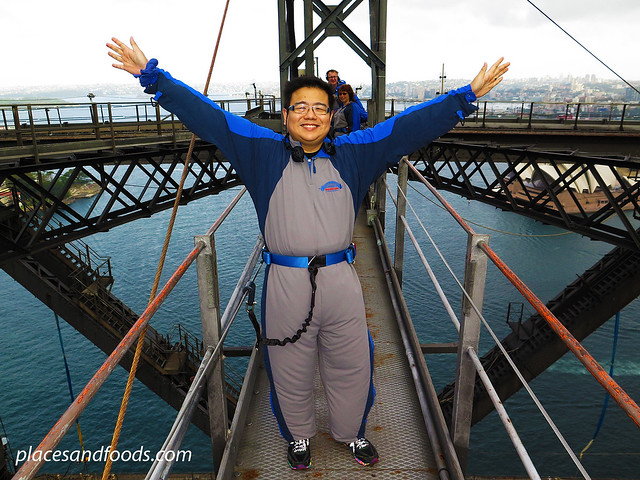 There are a few stops for pictures and Adrian will get the best of you or you and your partner and for the group. Don’t worry so much about your hair as it is so windy up there your hair probably looks like Whitney Houston. It will look good, Adrian assures us.

I prayed for rain but it didn’t happen. If there is, you will remember the moments forever like the cold rains on top of Mount Kinabalu. 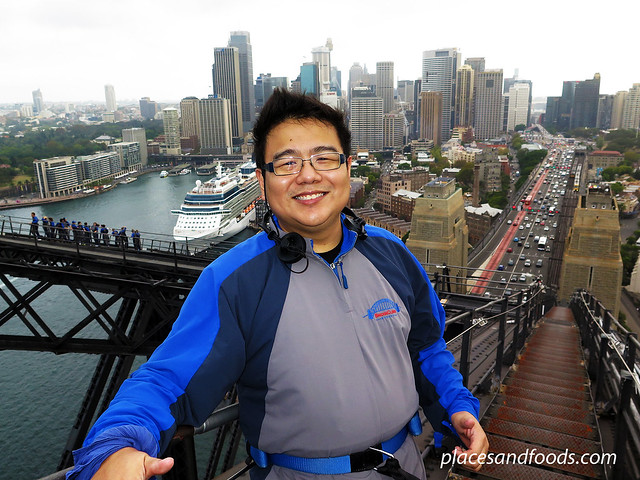 After three hours, our group back to the starting point and everyone comes back with a smile on their face. It might not be as vigorous or adventures some might anticipate but it is a fun climb. 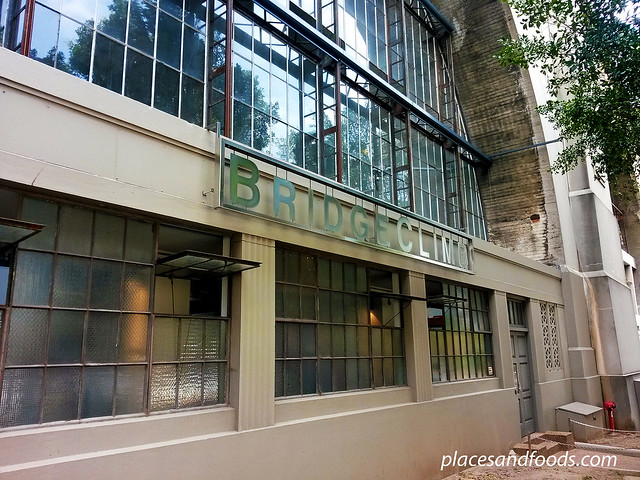 If you are planning for the climb of your life, book first and get your preferred timing. You can also purchase the wedding climb if you want something special or how about a proposal on top of the bridge, that will be awesome! For more info, visit www.bridgeclimb.com The Bridge Climb is located at 3 Cumberland Street, The Rocks, Sydney. 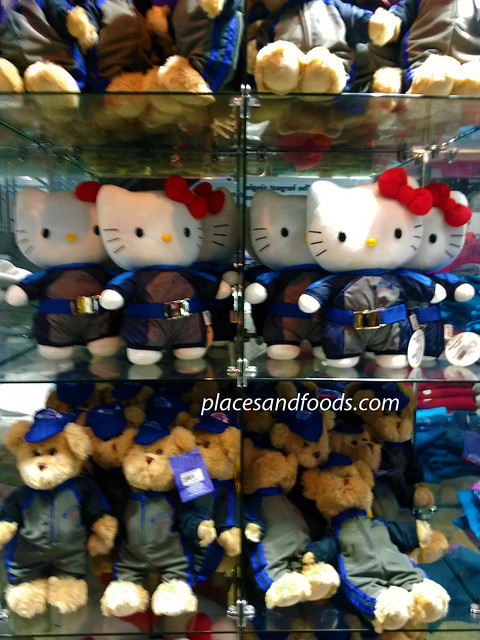 Remember to purchase those cute Sanrio Hello Kitty limited edition merchandise for Sydney Harbour Bridge Climb, they are available at the merchandise store.