We had fun so far in Siem Reap. This was our most adventurous and tiring travel trip we had in our life. However, day three was crazier than the two days combined. We planned to visit 10 temples on our last day in Siem Reap. Yes, ten temples! We had a new tour guide on the third day and he freaked out. Who doesn’t right?

After having our breakfast in hotel, we went to the Angkor circuit for our adventure with the first temple visit of the day, Preah Khan Temple. 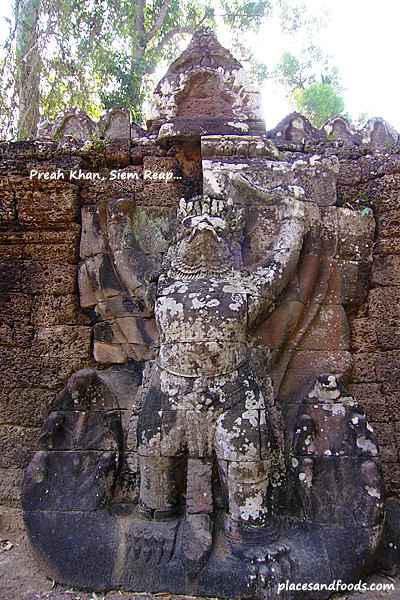 Picture shows the “Garuda” holding the “Nagas” at the outer wall of Preah Khan.

Many tourists used to mistaken this as the Ta Prohm temple or the “Tomb Raider” temple due to huge tree growth within the temple. However, during our visit some of the trees have been cut and restoration works on the temple can be seen. 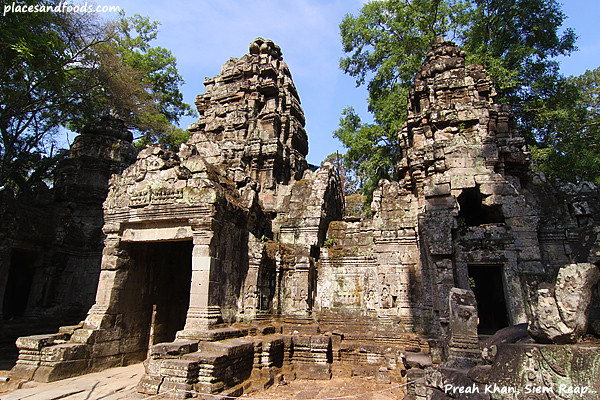 The beautiful temple of Preah Khan. 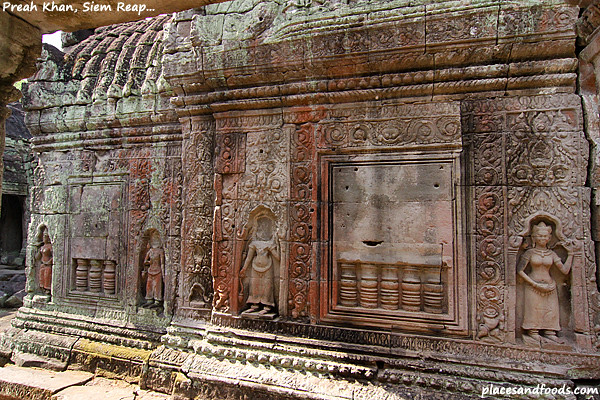 Some of the heads of the sculptures were destroyed by the anti-Buddhist reaction during the era of Jayavarman VIII.

Preah Khan (Khmer: ប្រាសាទព្រះខ័ន), sometimes transliterated as Prah Khan, is a temple at Angkor, Cambodia, built in the 12th century for King Jayavarman VII. It is located northeast of Angkor Thom and just west of the Jayatataka baray, with which it was associated. It was the centre of a substantial organisation, with almost 100,000 officials and servants. The temple is flat in design, with a basic plan of successive rectangular galleries around a Buddhist sanctuary complicated by Hindu satellite temples and numerous later additions. 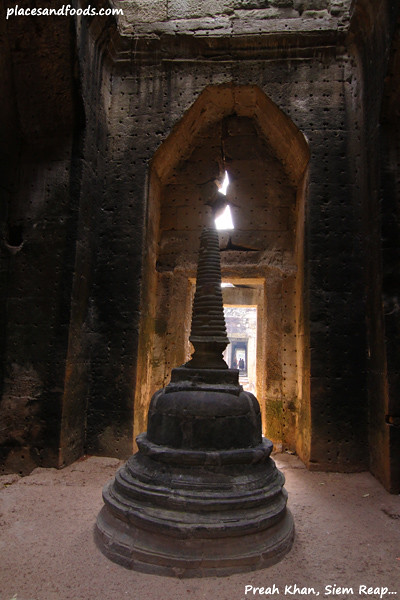 A mini stupa (or alike) in one of the halls of Preah Khan. 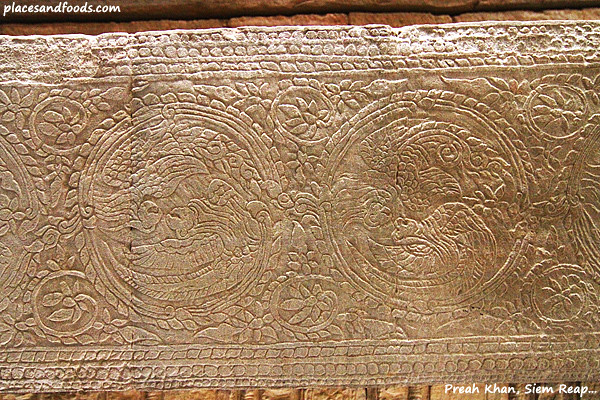 Beautiful inscriptions on the wall in the temple. 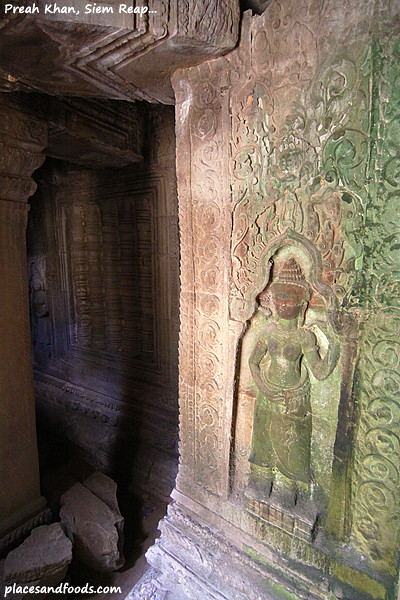 Wall of a sculpture with natural green tone inside the temple. 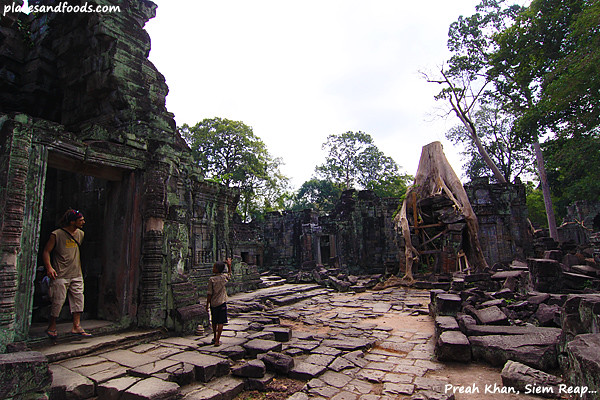 The huge tree within the temple was cut to stop it from growing. 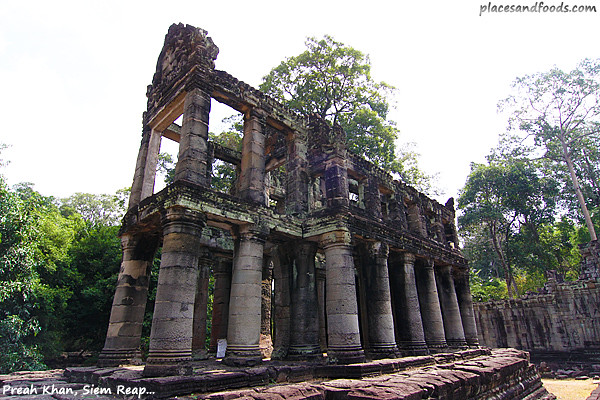 An unknown structure near Preah Khan, we were told it was a library by our guide. 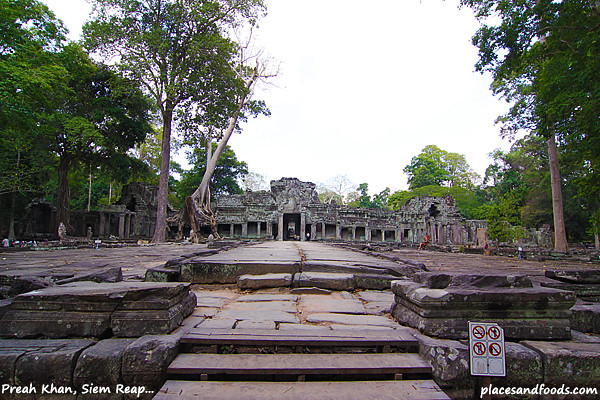 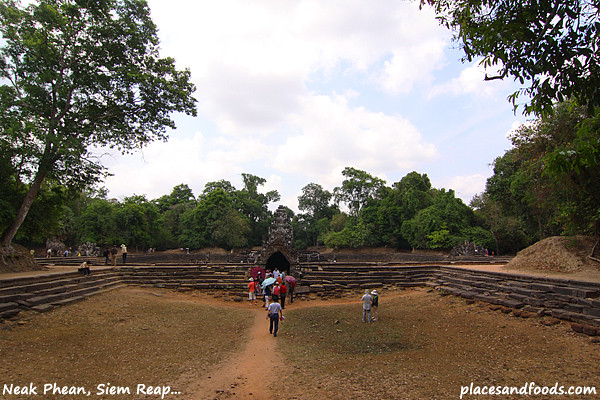 Neak Pean is one of the most unique temples we visited in Siem Reap. 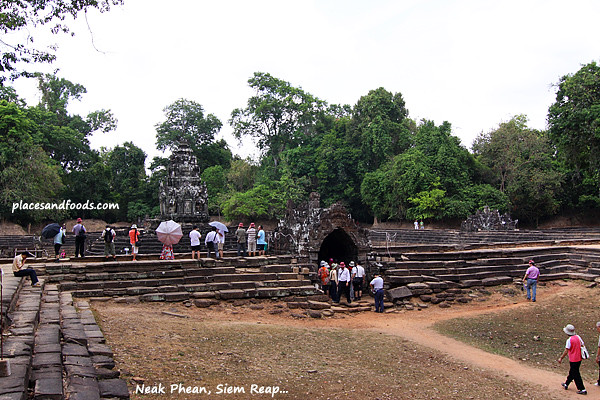 Neak Pean (Khmer: ប្រាសាទនាគព័ន្ធ) (“The entwined serpents”) at Angkor, Cambodia is an artificial island with a Buddhist temple on a circular island in Preah Khan Baray built during the reign of King Jayavarman VII. It is the “Mebon” of the Preah Khan baray (the “Jayatataka” of the inscription) 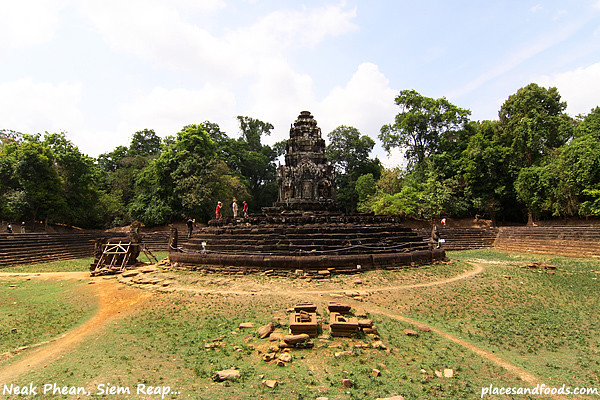 The name is derived from the sculptures of snakes (Nāga) running around the base of the temple structure. 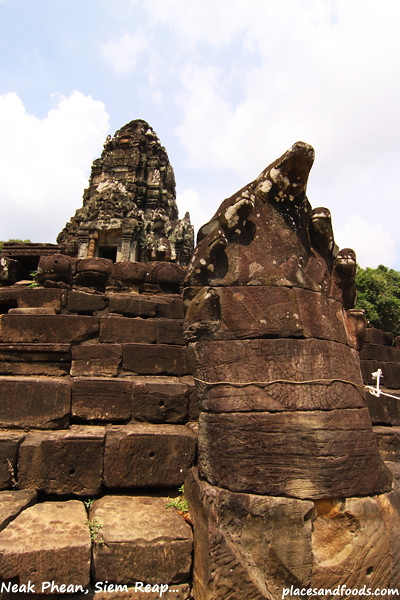 One of the snake (naga) sculpture in the temple.
Back to its prime, Neak Pean would be covered with water. It is believed that this temple is designed for medical purposes as it is one of the many hospitals that Jayavarman VII built. It is based on the ancient Hindu belief of balance. Four connected pools represent Water, Earth, Fire and Wind. The ancients believed that going into these pools would balance the elements in the bather, thus curing disease. In the middle of the four healing ponds is the central water source.

At the time of our visit, there was no more water. Maybe during the monsoon season, water might flood the pond area again. It is hard to imagine that this is used to be a temple for healing and medication.

The third temple we visited was Ta Som. Ta Som was smaller in size than we expected. 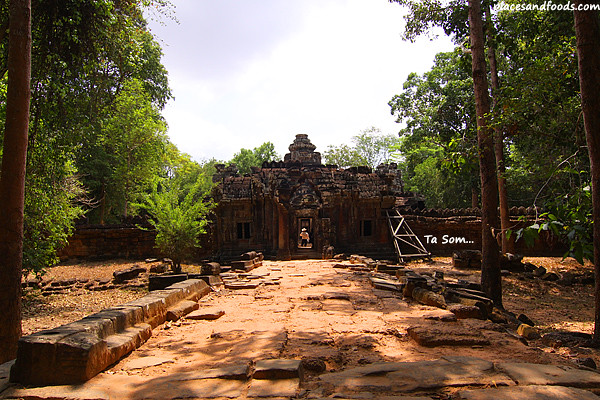 Entrance of Ta Som temple.
Ta Som (Khmer: ប្រាសាទតាសោម) is a small temple at Angkor, Cambodia, built at the end of the 12th century for King Jayavarman VII. It is located north east of Angkor Thom and just east of Neak Pean. The King dedicated the temple to his father Dharanindravarman II (Paramanishkalapada) who was King of the Khmer Empire from 1150 to 1160. The temple consists of a single shrine located on one level and surrounded by enclosure laterite walls. 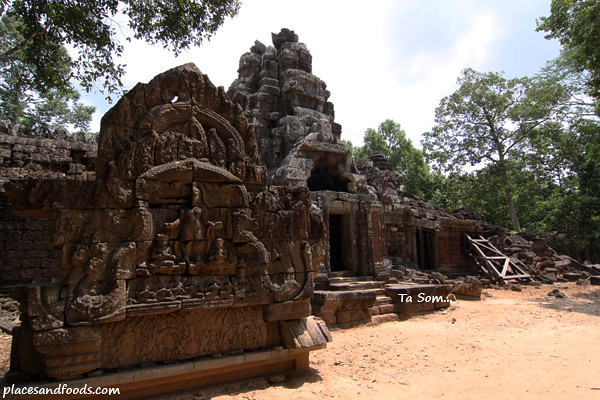 Like the nearby Preah Khan and Ta Prohm the temple was left largely unrestored, with numerous trees and other vegetation growing among the ruins. In 1998, the World Monuments Fund (WMF) added the temple to their restoration program and began work to stabilise the structure to make it safer for visitors. However during our visit there, the restoration works seem to be halted. As we read from the sign board nearby the temple, the restoration works stopped in 2005 after 5 years of repairing works.

A quick glance at Eastern Mebon from the outside gave us the impression that the temple was left in ruins. Well, that was not the case actually. 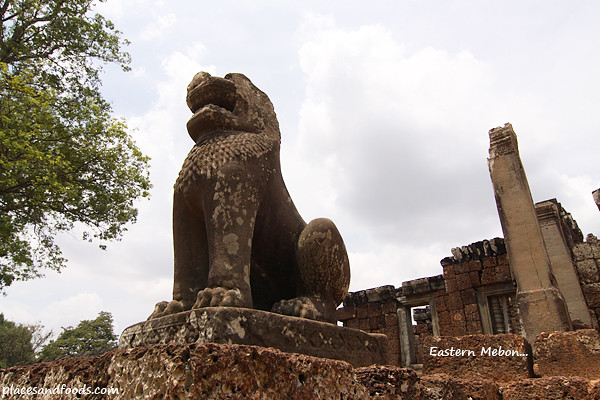 The East Mebon(Khmer: ប្រាសាទមេបុណ្យខាងកើត) is a 10th Century temple at Angkor, Cambodia. Built during the reign of King Rajendravarman, it stands on what was an artificial island at the center of the now dry East Baray reservoir. 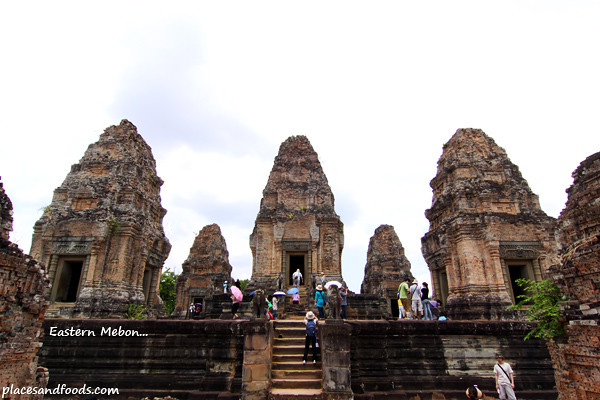 The East Mebon was dedicated to the Hindu god Shiva and honors the parents of the king. Its location reflects Khmer architects’ concern with orientation and cardinal directions. The temple was built on a north-south axis with Rajendravarman’s state temple, Pre Rup, located about 1,200 meters to the south just outside the baray. The East Mebon also lies on an east-west axis with the palace temple Phimeanakas, another creation of Rajendravarman’s reign, located about 6,800 meters due west. 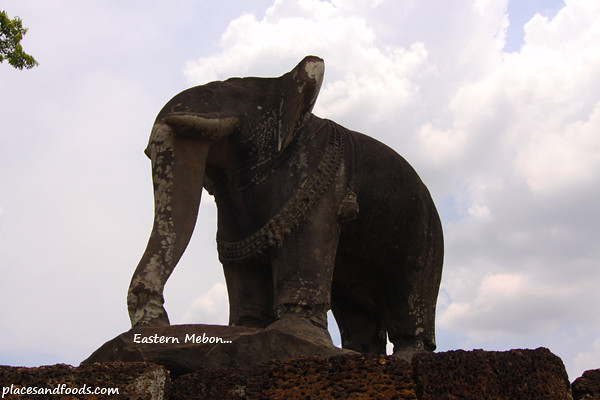 Due to the existence of the water in the past, the plain surrounding the temple are grown with vegetation.

Pre Rup has the similarities of the Roluos Group of Temples: Bakong, Preah Ko and Lo Lei Temple we visited on Day 2 in our opinion. 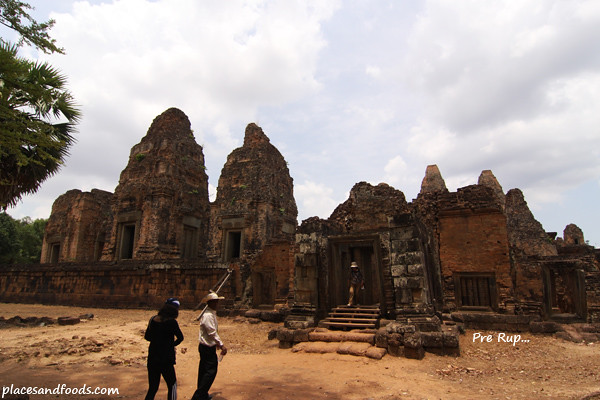 Pre Rup (Khmer: ប្រាសាទប្រែរូប) is a temple at Angkor, Cambodia, built as the state temple of Khmer king Rajendravarman and dedicated in 961 or early 962. It is a temple mountain of combined brick, laterite and sandstone construction.

The temple’s name is a comparatively modern one meaning “turn the body”. This reflects the common belief among Cambodians that funerals were conducted at the temple, with the ashes of the body being ritually rotated in different directions as the service progressed. 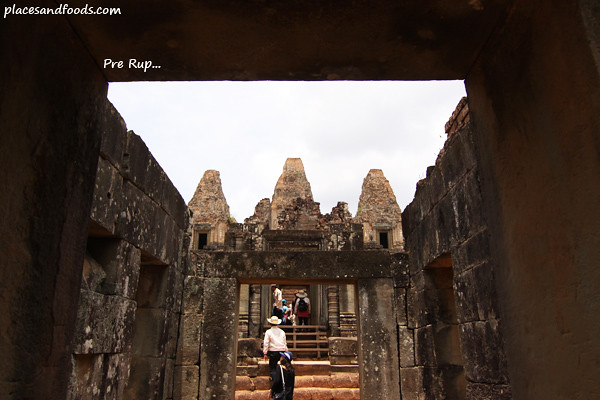 Don’t judge the size of this temple from the outside. There are three levels in this temple, we had to climb up to the top and we were greeted by three towers. There are structures on each level and from the top you can the scenery of Angkor circuit. 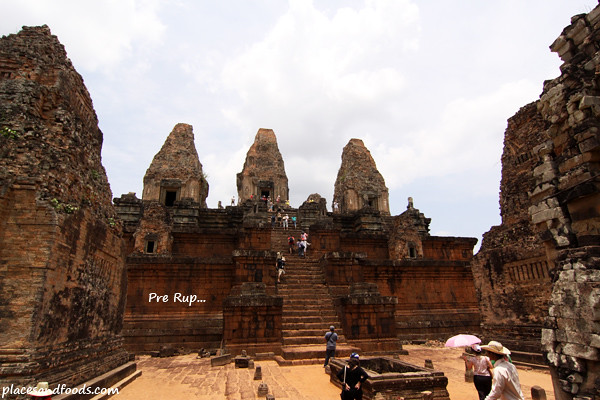 Restoration works can be seen as there were brand new doors on the towers. This was the fifth temple we visited on the day and we went for lunch after this.

We didn’t want to travel back to the city for lunch as we didn’t have time for it. The tour guide recommended a restaurant in the Angkor circuit near Angkor Wat. The house-alike restaurant serves authentic Cambodia food and French food. Read our review on the restaurant here.

Please check out our other Siem Reap adventure: