Zhuhai is notoriously popular with its nightlife. Thus, as Zhuhai is located next to Macau, many consider traveling there for a night or two.

We were not so keen of its nightlife or even their cultural shows. We wanted to venture to more attractions. We were assigned with the local guide who was completely hopeless. The only thing on his mind was to bring us to shop so he can earn his commission.  Luckily, out of the two disastrous days we still find goodness in Zhuhai which are the tourist attractions like Fisher Girl Statue.

Getting a taxi in Zhuhai is an easy task but there were also many strangers offering rides at cheaper rates. For those people, we try to avoid. God knows what will happen if we hop on to their car or van. We would not want to take such unnecessary risks. 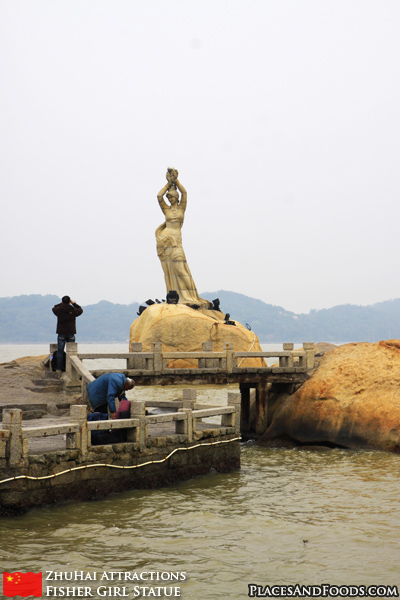 Fisher girl statue is one of the main attractions of Zhuhai. It is located at Lover’s Road and you can reach there by Bus 9 or Bus 99. We took a taxi instead.

We reached the Fisher Girl Statue, it is located out of no-where by the seaside at the Lover’s Road.

There is a rock signage that reads “Fisher Girl Statue” in Chinese.

So what is this Fisher Girl Statue? Legend has it that an angel descended to earth one day and fell in love with the beauty of the land. Reluctant to return, she turned herself into a fisher girl, weaving nets and searching for precious pearls to earn a living. In addition, she unselfishly used her knowledge and powers to heal villagers who were ill, and so was well loved by one and all. Soon she met a young fisherman named Hai Peng and they fell in love. Not long after, however, Hai Peng heard and believed malicious accusations, and demanded the fisher girl to give him her magical bracelets as proof of her affection. The fisher girl tearfully explained the origin of the bracelets. While she was still the daughter of the South Sea Dragon King, the eight bracelets were given to her by the eight palace mistresses, to guard her against the thought of abandoning immortality. She would die if she even removed one. Tragically, Hai Peng did not believe her story and turned to leave. The fisher girl, to prove her love for Hai Peng, removed her bracelets and died in his arms instantly. Hai Peng was filled with remorse and grief. His great sorrow moved the Jiu Zhou Huan Elder, who taught him the way to bring the fisher girl back to life. For this he had to travel to the Jiu Zhou Island to find the Resurrection Grass, which must then be fed with man’s blood. After much difficulty, Hai Peng found the grass and grew it with his own blood. Days turned to years, and the grass was finally ready and used to revive the fisher girl. Henceforth, the fisher girl became a true mortal. On the day of their wedding, all the girls together found a gigantic, magical pearl at the seashore. In gratitude, the fisher girl presented this to the reverent Elder. Sourced from WikiTravel.org

The weather that day was gloomy. The sky looked so flat and the sea water colour was brownish. It was not a perfect day for picture.

We did not spend much time there. Hence, we took a few pictures and continued our journey to Shijing Mountain Park.

The Fisher Girl Statue is a good stop for those who are going to Shijing Mountain Park. Make sure you have some numbers of the taxi companies as it is quite tough to get a taxi there.