It was an auspicious evening Imbi Palace Group of Restaurants played host to 140 honored guests including theblogger friends as well as friends from the media to share the momentous occasion. Launching the rebranding signifies a new milestone on their journey, and a symbol of more exciting things to come. 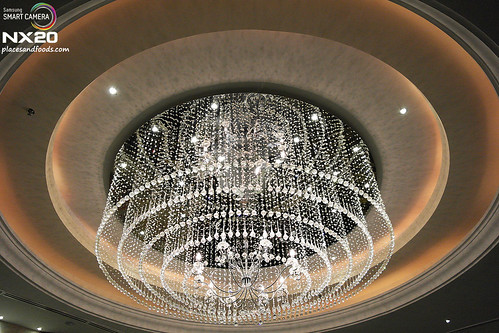 “Earlier this year, we closed down our outlet on Jalan Imbi to make way for the development projects in the city. This was our first outlet, the place where it all started, and we were leaving. Imbi Palace Restaurant would be gone forever. This is why, after some thought we decided to change our company name to the Imbi Palace Group.” said Mr. Lum during his speech. 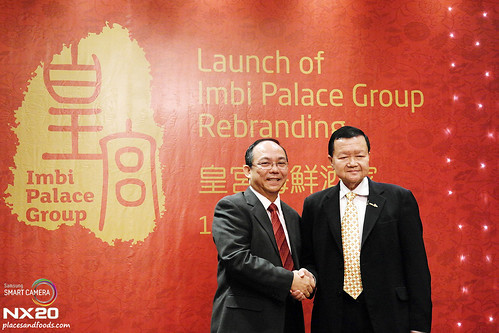 Mr. Lum mentioned that the Imbi Palace Restaurant history and heritage will continue to live on in the company name. With the new name, a new logo now represents the restaurants. As with the previous logo, the corporate colour is Gold. Gold represents the gold standards adhere to in the food, in terms of taste and quality and service excellence. The Chinese calligraphy stroke in the new logo stands for culture, tradition and art.

“At the Imbi Palace Group of Restaurants, we want to share our passion for food with you and your loved ones and bring excitement to your palate.” Mr. Lum added. 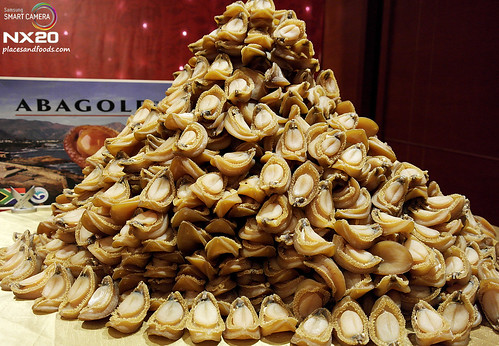 The South African dried abalones on display. They having promotion of this.
After all the speeches, it was time for our dinner. Personally I have dined in Imbi Palace a few times prior to this dinner. In fact, I had enquired the rates and also the services of this restaurant for our wedding. However they were fully booked at that time. 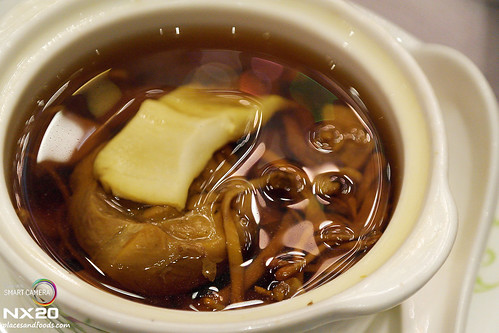 I was glad that shark fins soup was not part of the menu or else it would be an awkward situation. The Double Boiled Cordyceps Flower with Top Shell & Fish Maw was surprisingly refreshing. They used quality fish maw (you can tell from the taste and texture of it) and this soup was a good appetizer for a Chinese dinner. It is believed that It helps improve skin complexion, nourishes our Yin, and cleanses our kidney. 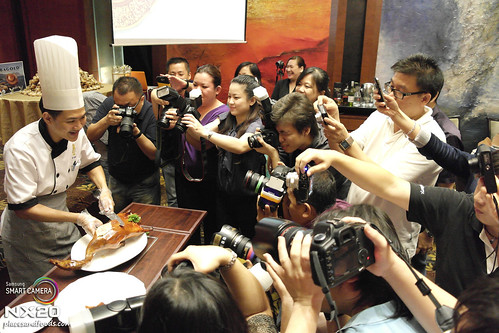 Chef preparing the Peking Duck in front of bloggers and medias.

Instead of having the usual cold or hot platter, we were served with the infamous Peking Duck (RM 70). The Peking Duck was slightly different from the usual roast duck due to its preparation and serving. 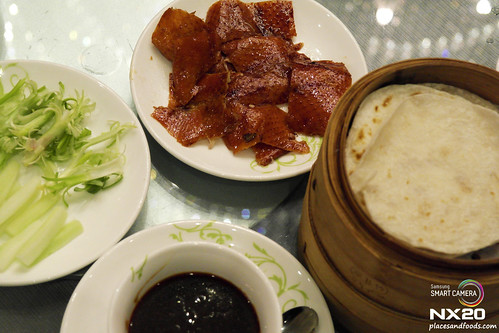 Peking Duck was served by cutting off the skin and wrapped it with a crepe, pancake or spring roll skin together with spring onion , cucumber and the hoi sin sauce. 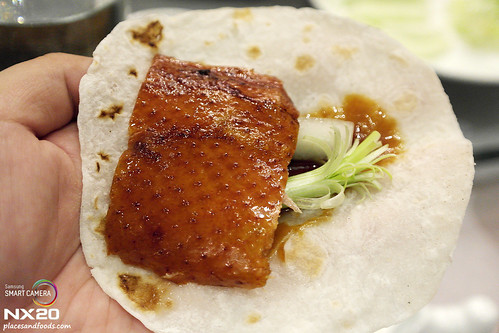 The end product should look like a mini spring roll. The importance of the crispiness of the roast duck played an important role in this dish. The duck meat which was not used will be chopped and will be served as a dish itself or stir fried it with another sauce (depending on restaurant). Surprisingly, the roast duck skin was not crispy enough to my preference but it was still good. They used a flour based crepe as wrapper, there are other variations such as an egg crepe. 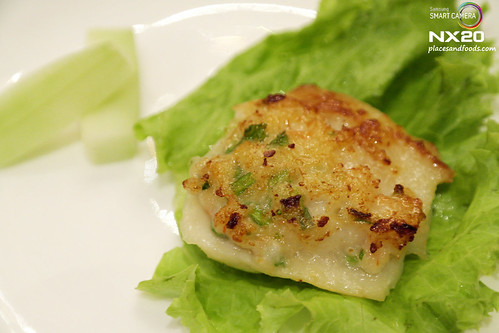 Pan Fried Stuffed Scallops (RM14.00)
Pan Fried Stuffed Scallops (RM14.00) was next.  This is combined with Banana Prawns from the Gulf of Carpenteria. The scallops are stuffed with fresh prawns to create two distinct flavors and aromas. I thought this was well cooked and I still can taste the freshness of the scallops. The stuffed meat didn’t overwhelm the taste of the scallop and it was not overcooked. 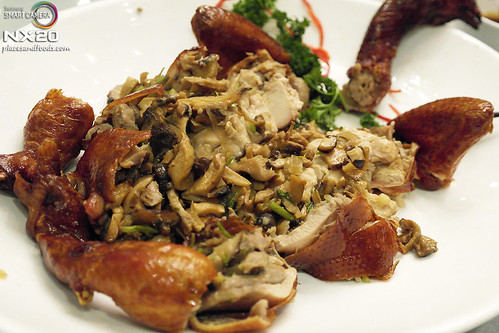 8 Treasures Truffles Chicken deconstructed.
For this particular dish, the chicken is prepared by stuffing 8 different types of mushrooms that has been infused with truffle sauce. The entire chicken is hung up to roast to bring out the rich flavor of the chicken meat while maintaining a crispy skin on the outside. Due to the “hanging”, you will notice that the neck of the chicken is longer than usual, and that is how the name, Kookoo chicken comes about.

The stuffed mushrooms were well season and blended well with the chicken. This fried chicken had a crispier skin than the previous Peking Duck. If the Peking Duck had the same crispiness as this, it would be perfect.

BBQ Broiled Spanish Pork Ribs (RM158.00). The ribs are from the Spanish Iberian pig, which is known for its nutty flavour, and its delicate melt-in-your-mouth marbling. The Iberian pig’s diet of acorns gives it a uniquely tender, rich and rosy meat.

There are many preparations for this, I tasted a saltier version than this and it was good. Imbi Palace version had its own characteristic. It thought it was juicy and delicious. 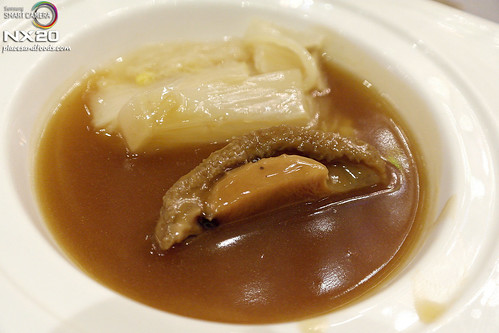 South African Dried Abalone (Promo – RM 88.00 per piece) The South African Dried Abalone looked like a golden ingot that signifies wealth and prosperity. Harvested from the unpolluted seas off the coast of Hermanus, the quality of the abalone is assured because we follow international Food Safety methodology, that is, the HACCP (Hazard Analysis Critical Control Points), in its preparation process. Notice the texture of the abalone is sticky, rich and chewy.

The word 18-head is a measurement unit in Chinese kitchen for the size of the abalone. This means you get 18 pieces per 600 gram – which is a very large abalone. We normally sell this for RM168, but for the promotion period, you can have this at RM88 per piece – while stocks last.

We had half a piece each and I thought it was tasty. The abalone was cooked to softness and it went will with the “bak choy” and also the special sauce.

The next dish was the Lan Zhou Knife Shaved Ramen. This was a delicacy from Lan Zhou, GanSu, China and is a heritage food enjoyed for generations. The Ramen is shaved off a ball of dough and as such none are identical. The ramen was served in a pickled vegetable soup.

Peking duck was generally served in two different styles, the first was the crispy duck we had earlier and the second where the duck meat was braised with noodles. Like I mentioned earlier, sometime the duck meat can stir fried to another dish and for Imbi Palace version, it was cooked with noodle.

This dish was served by our Chef, Xiao-Chen（小陈）。Xiao-Chen is from LanZhou. He had been with the restaurant since the start of their first Imbi Palace restaurant back in the year 2003. He is now the senior chef in the Ramen kitchen. The ramen was beautifully made.

It was their signature dessert of the Imbi Palace Group and it was their best kept secret recipe. Secret recipe or not, I tasted similar coconut pudding in Penang. Nevertheless, it was delicious and a great dessert to end the dinner. 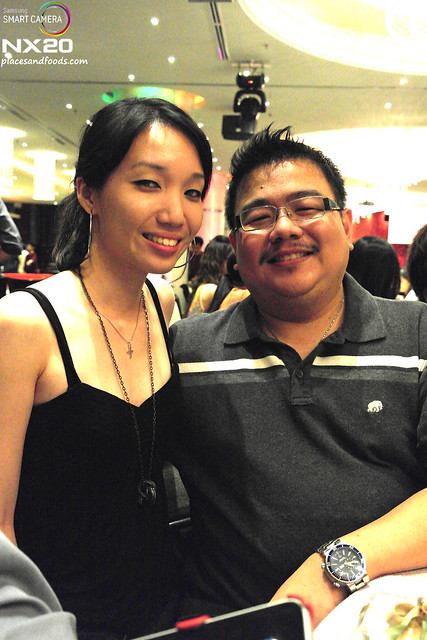 It is me and Naomi Tham.
With over a hundred of invited guests, media and VIP, I thought they did a good job of sending the message in their rebranding effort. The dinner was enjoyable and there were a few particular dishes were my favourites. Congratulations to Imbi Palace Group on their rebranding effort and we wishes them all the best.