MIGF 2012 Opens With A Symphony Of Great Cuisines

After our absence from MIGF last year, we will not repeat our same mistake again this year. As we were busy with our work and traveling schedule last year, we didn’t have the luxury of time to involve for any MIGF related events or reviews. It was a busy month of October for 2011. This year, we will try to make up for last year with more coverage and reviews. 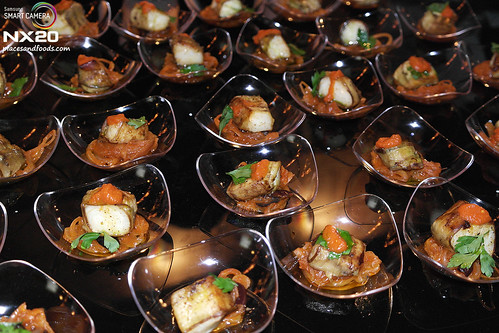 From the music to the food, it was a symphony of fun, scrumptious delights and great offerings at the Gala Launch of the Malaysia International Gourmet Festival (MIGF) 2012, held this evening at the Sunway Pyramid Convention Centre.

I was unfortunately late as I was help by meetings and work in office. There I met other friends and bloggers and we quickly sneaked into the convention centre for the media preview. Like previous years, media representatives like us got to take picture and sample the food first before the VIPs. I met many friends from the restaurants and it was a good catch up session.

The event later was graced by Tourism Minister Dato’ Sri Dr Ng Yen Yen, and attended by Malaysia’s who’s who as well as members of the media and the foodie blogosphere, the night started with a symphonic band serenading guests as they mingled in the foyer, in line with the theme “Classical Chefs – A Symphony of Great Cuisines”. 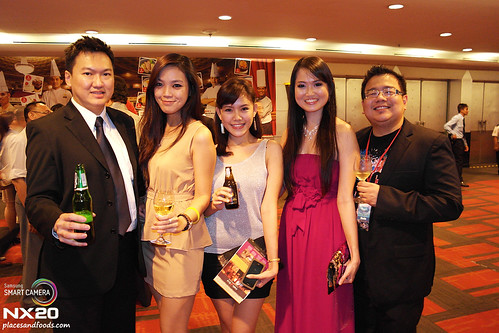 With Malaysia Hottest Blogger’s Tim Chew and the girls.

And as anticipation of the launch grew, MIGF Organising Chairman Dato’ Steve Day threw up a surprise that was met with plenty of chuckles, before taking the stage to give his welcoming address. Speaking on the importance of strengthening the premium dining scene in Malaysia, Dato’ Steve also exhorted his guests to just enjoy themselves with the offerings specially laid out in the Theatre of Cuisines.

Then, with a swipe of knives, Dato’ Sri Dr Ng, Dato’ Steve and MIGF Royal Patron Tunku Naquiyuddin Tuanku Ja’afar opened the 12th edition of the country and region’s most well-known gastronomic event, which serves up Special Festival Menus at Special Festival prices accompanied by a host of Special Festival Offers from 1-31 October. 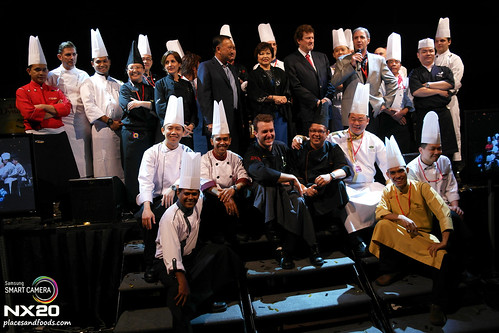 As the evening progressed, the fun factor rolled on, with the introduction of the Classical Chefs from the 28 restaurants, a performance by violinist extraordinaire Dennis Lau and impressive stilt-walkers as the guests got the chance to tour the Theatre of Cuisines and the exquisite Festival Menus in a range of cuisines, from Malaysian favourites to French, Italian, Western, Latin American, Cuban, Lebanese, Japanese and Korean.

This also served as a wonderful introduction to Taste MIGF, the preview event of MIGF happening tomorrow, in which the general food-loving public can, for the first time, try for themselves the mouth-watering samples from the restaurants’ Festival Menus in the Super Gourmet Safari.

With free admission, all visitors to Taste MIGF need to do is purchase Taste Tokens, valued at RM5 each and sold in booklets of 10 for RM50, and they’re set for a premium culinary adventure like no other. Additionally, with the tasting dishes priced from 1-3 Tokens, Taste MIGF offers a great value-for-money foray into the world of premium dining. 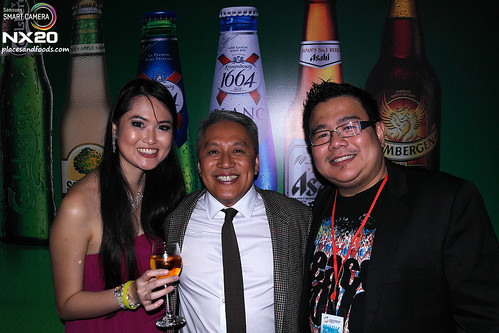 This year’s theme of “Classical Chefs – A Symphony of Great Cuisines” was chosen to symbolise and celebrate the roots and traditions of basic good and honest cooking.

“Over the years we’ve seen all sorts of innovative food trends make their debut – nouvelle cuisine, fusion, molecular cuisine, to name a few – and yet through it all, the experts still agree that nothing beats ‘Mama’s Cooking’!” says Dato’ Steve.

“Let’s face it, whatever the choice of cuisine, people simply love the classics, whether it be authentic Malaysian or authentic Japanese, Italian or any other cuisine.”

Of the participating restaurants, celebrating Malaysia’s rich food heritage are Bunga Emas and Enak KL which feature traditional Malay cuisine, with Makan Kitchen providing a multi-cultural round up of Malay, Chinese and Indian cooking, as well as fare from the Peranakan, Kristang and Iban communities. In their menus, you can discover dishes made from recipes that have been handed down from generations, including grilled fish marinated in coconut and cili padi paste and served with honey-tamarind sauce.

I met up with chef from Makan Kitchen as he recognized me from the review I did for his restaurant a few years ago. At Makan Kitchen booth, I sampled his special made soup and his BBQ wagyu cheek. The soup was well done and the wagyu cheek was cooked to tenderness.

For Enak KL, I have already did a review at the restaurant a week ago. Recognized as one of the best Malay fine dining restaurant, Enak KL offers six meal courses with or without wine pairing. You can read our review on Enak KL for MIGF at https://www.placesandfoods.com/2012/09/enak-kl-migf-2012-menu.html

Chinese cuisine is strongly represented by The Emperor, Dynasty, Lai Po Heen, Five Sen5es and West Lake Garden, with a range of dishes from across the genre, including BBQ Beijing duck with mango and crispy taro; roulade of roasted crispy duck with eight treasures and glutinous rice garnished with fresh shimeji mushroom; Peking duck and Hong Kong bau.

As expected, I met up with my friends at Mandarin Oriental Hotel Kuala Lumpur. It was a great get-together session as I have not met up with them for months.

For a superb mix of Chinese and Thai, there’s Imperial Rama, with creations such as double-boiled guinea fowl with Chinese herbs soup, while rounding up the Asian influence are Japanese masters Sagano, Kofuku and Ten Japanese Fine Dining with fresh raw seafood that can’t be beaten, and newbie Onsemiro Korean Fine Dining, with creations from the land of Kimchi that include beef chuck flap grilled over Korean Oakwood charcoal served with a special sauce; and traditional rice cakes with a honey filling. 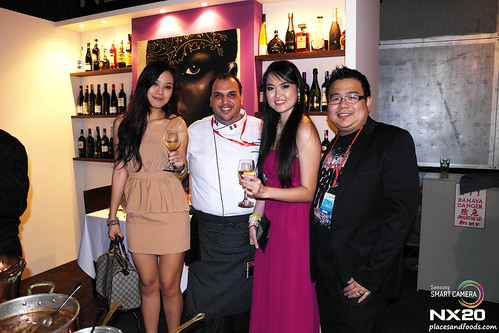 Dishes just like those enjoyed by families in Lebanon are brought to you by Al-Amar, while European classics are presented by Prego, Senja and Nerovivo with full Italian flair, L’Heritage with Swiss perfection and Cuisine Gourmet by Nathalie with French refinement.

We sampled the food at Nero Vivo and I must say it was quite impressive. The macaroons were crowd’s favourite at Cuisine Gourmet by Nathalie.

Then there are Mandarin Grill, The Olive, The Restaurant, New Orleans Bar and Grill, Samplings on the Fourteenth Restaurant, Circus and Grill 582 with the best of Western and Continental dishes, while THE POMELO creates a chilled-out vibe with exquisite healthy cuisine and Qba Latin Grill and Bar dazzles with the unique taste of Cuba and the Caribbean. 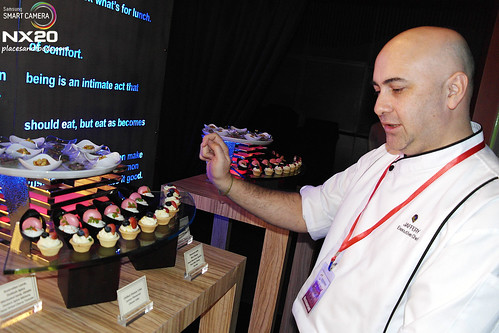 Chef from Grill 582 of Best Western Kuala Lumpur explaining the ingredients of the food.

Grill 582 of Best Western Hotel Kuala Lumpur is one of the newcomers of MIGF 2012. It was great to meet up with the executive chef again. One of the highlights of their booth was the macaroon with creamy blue cheese. I loved that home made cream, it was so delicious and it didn’t overpowered by the blue cheese.

And with prices starting from RM98++ per person for a three-course meal, you will find that the Festival Menus can provide you with an affordable introduction to the world of great cuisines and premium dining.

For a full range of Festival Menus, prices and offers, visit the official website at www.migf.com.

There is no greater introduction to premium dining than that offered at the Theatre of Cuisines, with restaurants participating in MIGF 2012 presenting samples of their Festival Menus to the public.

The tasting portions are big enough to give an idea of each chef’s creative talents but small enough to allow visitors to try food from a lot of different restaurants. More importantly, this means that first-time diners can try all sorts of new cuisines without having to pay the price of a full meal.

All visitors need are Taste Tokens, valued at RM5 each and purchased in booklets of 10 for RM50, and available at the venue tomorrow. Taste Tokens have been created with the benefit of diners in mind, so that there are minimal queues or delays in people waiting for their change.

Taste Tokens can also be entered into a lucky draw at the venue benefitting the Budimas Charitable Foundation for Children.

At the Gourmet Village, purveyors of the finest gourmet meats, wines and cigars bring you their wares. These include the distributors of the most renowned wines and spirits, luxurious Cuban cigars, the best of the world’s cheeses, tea and coffee, premium milk, meat products and chocolates.

Then there are all the ingredients you need to create fabulous dishes in your own home, such as olive oil from Greece and other staples from various regions, including South Korea, the Netherlands, Italy, Argentina and South Africa.

Malaysia’s famous Chef Wan heads up an exciting programme of cooking classes and workshops, and will be taking to the stage at the Theatre of Cuisines to open the two tasting sessions. Catch this bubbly and lovable culinary expert as he brings you his best recipes, accompanied by plenty of hilarious chatter, at the Main Stage at 11am and 6pm.

There are also hour-long cooking classes, including lessons on:

If you’re unsure about which wines would go best with the dishes that you’re keen to try at home, do drop by the workshop on wine appreciation and pairing, and if you want to wake up and smell the coffee, all you need to do is sit in on the talk about coffee by Illycafe. 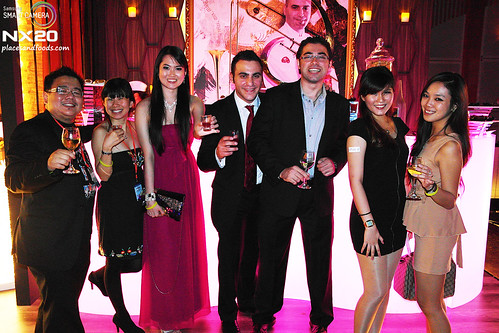 With Al-Amar Group VIPs and friends.

Indeed, life has never tasted or smelled so good. It will be a month of food reviews and we try to review as many MIGF restaurants as possible. Month October this year will not just limited to Oktoberfest but also a month of food galore for MIGF!

The Gourmet Village is open from 11am-11pm, while the cooking classes and workshops are held from 11.30am-8pm. For the full programme, check out the Taste MIGF newsletter or visit www.tastemigf.com.