There is a big announcement today at YGFamily website as Korean KPOP Group Big Bang is coming to Asia! Yes, it is Big Bang 2015 World Tour [Made] in Korea, Malaysia, Thailand, Singapore, Hong Kong, Indonesia, Philippines and Japan! So far these are the confirmed countries but there could be more! 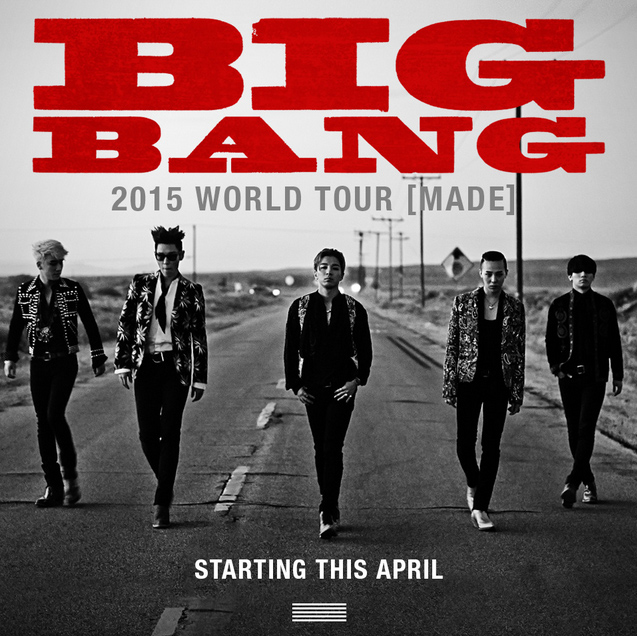 The Big Bang 2015 World Tour will start in Seoul Korea on 25-26 April with Naver at Seoul Olympic Gymnastic Stadium.

Next, Big Bang will perform in Guangzhou China at Guangzhou International Sports Arena on 30-31 May.

The next stop will be in China again at Shanghai Mercedes Benz Arena in Shanghai on 20-21 June.

They will be performing at Impact Arena Bangkok Thailand on 11-12 July 2015 in Thailand.

This will be followed by Malaysia at Putra Indoor Stadium, one night only at 25th July 2015. Dear Malaysian fans, please book early as it is one night only in Malaysia!

It will be also one night only in Manila Philippines at Mall of Asia Arena on 30th July 2015.

Big Bang will rock Jakarta Indonesia for one night only at Indonesia Convention Exhibition (ICE) on 1st August 2015.

The world tour will also be held in Japan on the following dates:

Mark your dates people and wait for the tickets on sale. Don’t miss this big opportunity to watch Big Bang live at your home country.
Source: http://facebook.ygfamily.com/ygperm/BIGBANG/MadeTour/made.php