Yes, it was a big opportunity for us to see and experience how Singha TP 12 Racing Team works behind the scenes in the pit. How the crew setup the car, how the drivers get ready and how they plan for pit stop, getting the tires ready and such. Thus, I was there alone as Rachel was at home taking care of our boys. 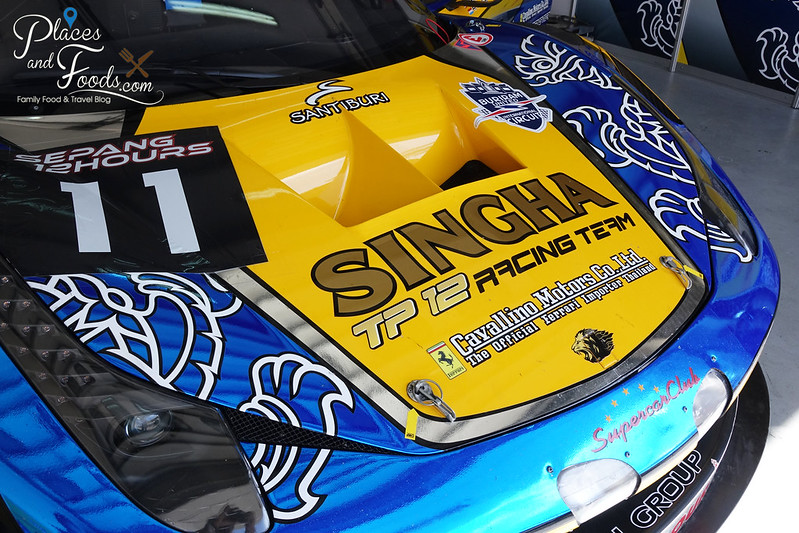 The Sepang 12 Hours Race is a 12 hours endurance race held in Sepang International Circuit. There are 24 race cars participated in this race. You can find cars like Ferrari 458 GT3, Audi R8 LMS, McLaren 650s GT3, Mercedes Benz SLS AMG GT3, Bentley Continental GT3, Lamborghini Super Trofeo, Porshe 997, Porshe  991, Toyota GT86, Subaru STI Impeza and Exige V6 GT4. It was an action packed endurance race as it is scheduled from noon to midnight. Yes, it is a non-stop 12 hour endurance race and each race driver can only drive for one hour max. The teams have to switch driver every hour during the endurance race.

There are four drivers in TP 12 Racing Team. The drivers include Singha director Mr. Piti Bhirombhakdi with Van Dam,Guidi and Rizzo. The number 11 Singha TP12 Racing Team is using the Ferrari 458 GT3 car with beautiful striking colours and stickers.

TP 12 Racing Team is less than 2 years old. They have raced in Thailand, China, Macao, Japan and Malaysia. Thus, they won the race in Japan and that is quite an achievement.

In the pit with me were a group of bloggers from Thailand as well as Mr. Trachoo from Singha. We had lots of chat and laughter in the pit as the pit crew slowly set up the car. 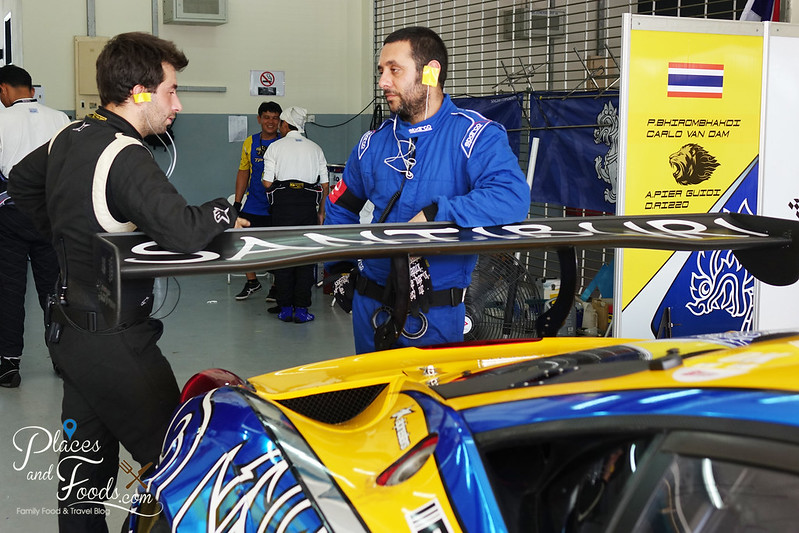 There were lots of talking and planning before the race among the pit crews and the drivers were resting and getting themselves mentally fit for the drive. The pit crews are from Thailand and also the rest of the world.

The target is at least a podium finish. Hence, winning the race is possible as the TP12 Racing Team’s Ferrari GT3 is a fast car and they have very good drivers too. 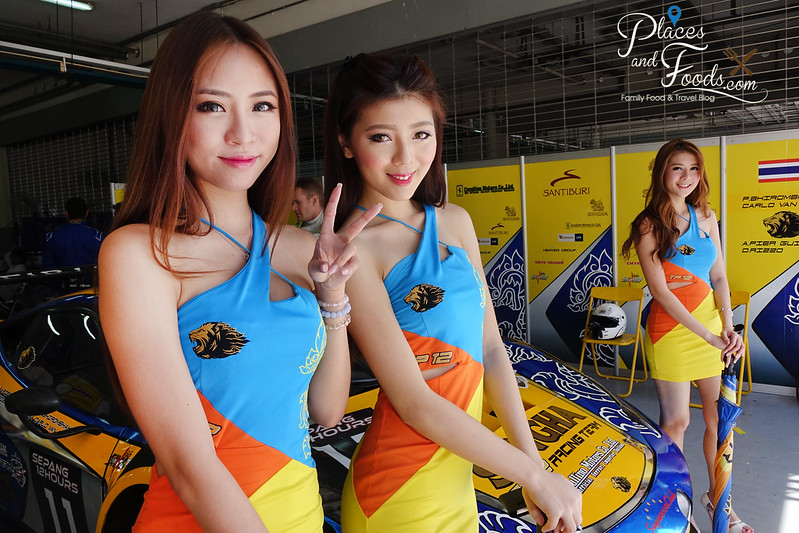 There were three car models and at first I thought they were Thais but they are locals. The friendly models were hanging out in the team paddock area and in the pit too. 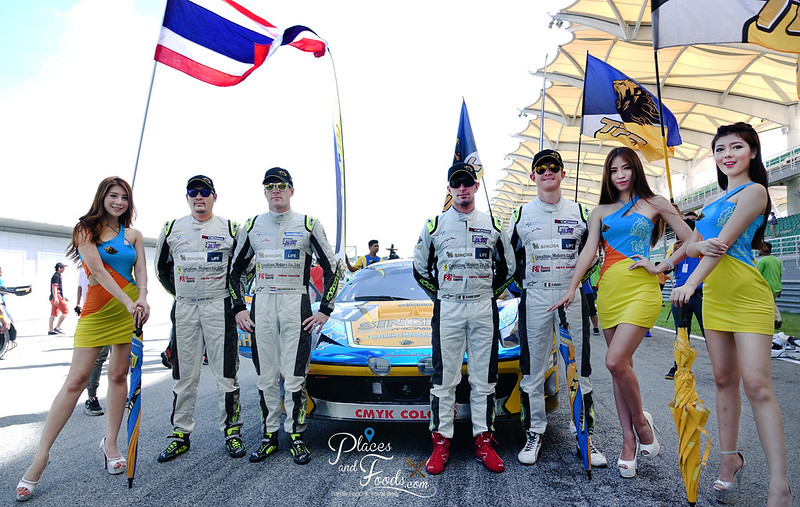 We had the opportunity to walk down to the race track just moments before race started. The TP12 Racing Team car models were the spotlight as many people wanted to take picture of them. 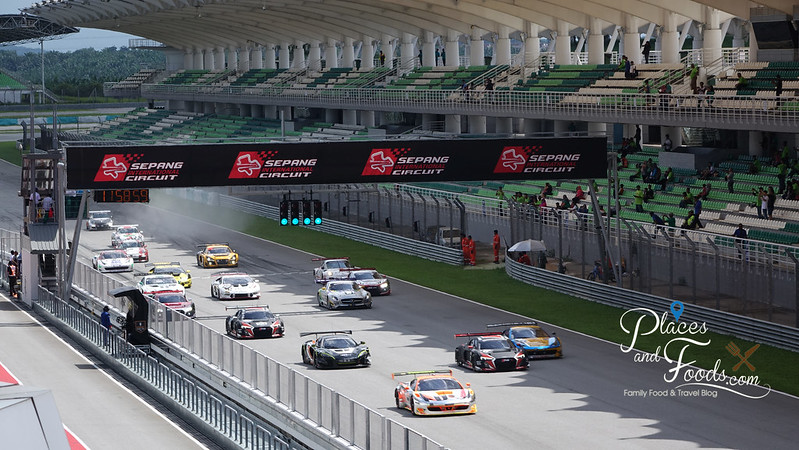 They off to a great start starting from fourth position to fought their way to first position for the first hour.

It is not a few hours race but a 12 hour endurance race so team strategy is important. Drivers can’t over push the car as it is a long endurance drive. Taking care of the car is one of the important criteria and the tires too.

For the first few hours, TP 12 Racing Team was in top two ranking until something happened, the rain. This was expected as it has been raining in late afternoon and the weather forecast predicted it too.

All racing teams are prepared for the rain and drivers are trained for it. However, during this time TP 12 Racing Team was losing time. From top two positions, they slowly dropped their position. The race had to stop as the rain was too heavy and the track condition was not fit for race.

During the unexpected break, mechanics and engineers checked the car and everything seems to be fine. The Ferrari 458 GT3 didn’t lose any horsepower and most of the components are still in good hands. One of the main possibilities is the tires. The wet tires as supplied by the tire manufacturers were not performing at its best. The mood in the racing pit was tense as mechanics and engineers were clearly not amused by the loss of time.

Racing during night time in Sepang was not easy. With the rain, it is tougher. The safety car was leading the race cars until almost at the end of the race. TP 12 Racing Team didn’t lose its fighting spirit and kept on fighting for the best position in the race track.

At the end of the day, TP 12 Racing Team managed to seal 8th position overall and third in GT3 category. It was not a great day but winning podium at the category level is still an achievement to be proud of.

It was a sign of relief when the race was over. The racing crews and drivers had the smile on their faces. Racing non-stop for 12 hours is not easy for the drivers and the racing crews.

It was a great experience and a learning curve for me. We watched races in paddock, grandstand, hill side and on TV but in the racing pit is a totally different perspective.

I would like to thank Singha for the opportunity as well as the new Thai blogger friends as we had great time together. It will be nice to follow TP 12 Racing Team to their other races next year. Once again thank you and it was an unforgettable experience!