When we visited Seoul last year, we had the opportunity to meet a few politicians in the parliament. The trip was partly sponsored by them so it was a gesture for us to meet up with them. During our chat, one of the politician mentioned how strong our Malaysian football team were. He told us that South Korea football team always lost to our Harimau Malaya (Malaysia Football Team) back in the old days. However, as time goes by South Korea is a giant football team in the world now and while Harimau Malaya didn’t perform that well in the past few years. 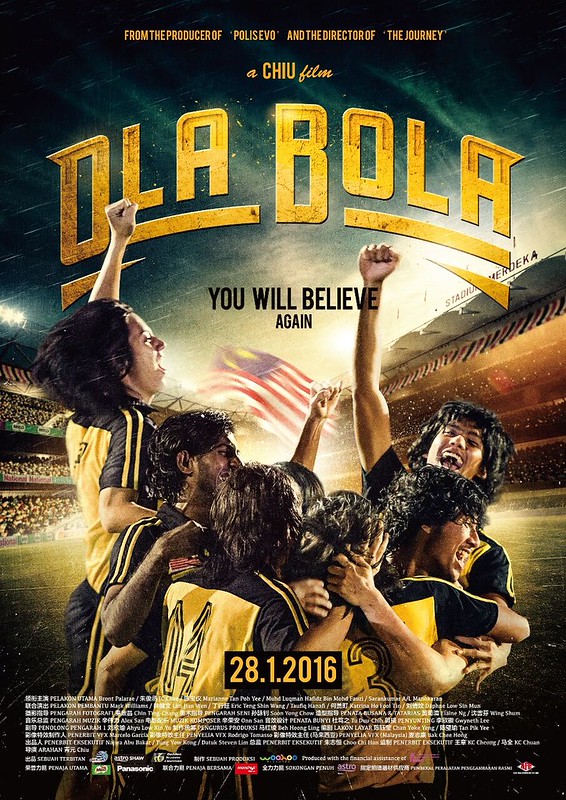 Coincidently, Ola Bola a Malaysian Film talks about the success of our national team in the 1970s leading to the Olympic Qualifying to Moscow 1980. Ola Bola started screening since last week and the film has raked RM 2.4 million in the first four days. Produced by Astro Shaw, the movie is directed by Chiu Keng Guan (The Journey & Polis EVO).

It is a fiction movie based on the true story of the Malaysia football team leading to the Olympic Qualifiers to Moscow 1980. However, real names are not used in the movie.

Thus, we know there were the legends of Malaysian football such as Arumugam, Soh Chin Aun, Shukor Salleh and Karl Heinz Weigang. The late Mokhtar Dahari was injured at that time so he didn’t feature in the film.

Footballers didn’t make that much money like the footballers now. The movie shows the struggle of semi-pros football players and it was really hard for them to make a living. The backdrop of the film in 1970s was amazing as well as some of the scenery shot by the Australian aerial cinematographer. The aerial shots in the movie are better than what we see from the ads by Tourism Malaysia.

Well, we all know after the movie in real life the squad didn’t make it to Moscow 1980 Olympics due to the boycott of USSR invading Afganistan. However, is there a sequel for Ola Bola?

The answer is no for the movie but in reality it is a big YES. What is the sequel for Ola Bola? The sequel is now and it is the right time for FAM and Harimau Malaya (now they called it Harimau Malaysia) to write the history themselves. If there will be a sequel in decades ahead, the national football team should pick themselves up and do well in the upcoming games and competition. Don’t talk about World Cup qualifying and we believe Lim Teong Kim’s squad is good enough to qualify to Olympics like Ola Bola.

3 thoughts on “Ola Bola The Sequel”