Planning to visit Macao this Chinese New Year? Want to know more about the local festive activities in Macau? Well, you will be on a treat as Macao Government Tourism Office (MGTO) is presenting the grand outdoor celebration event for Chinese New Year, known as the “Parade for Celebration of the Year of the Monkey”, on the third day (10 February) and sixth day (13 February) of Lunar New Year. The annual event features fabulous float parade alongside over 1,000 performers, splendid fireworks, local display of floats and so forth. Ready to live broadcast the event through TV channels and on LED screens at a total of nine locations, MGTO hopes to fill the city with festive joy and celebrate Spring Festival with local residents and tourists from around the world. This year, the whole Parade will revolve around a story about the Monkey King, a famous character in a Chinese classical novel. A multimedia opening show will also kick off the Parade for the first time, promising an extravaganza of light and 3D effects. The Tourism Office will also launch an interactive Wechat game this February to give out prizes for any “golden monkey” found, encouraging visitors to celebrate Chinese New Year in Macao and enjoy a stroll along local walking routes themed as “Step Out, Experience Macao’s Communities”. 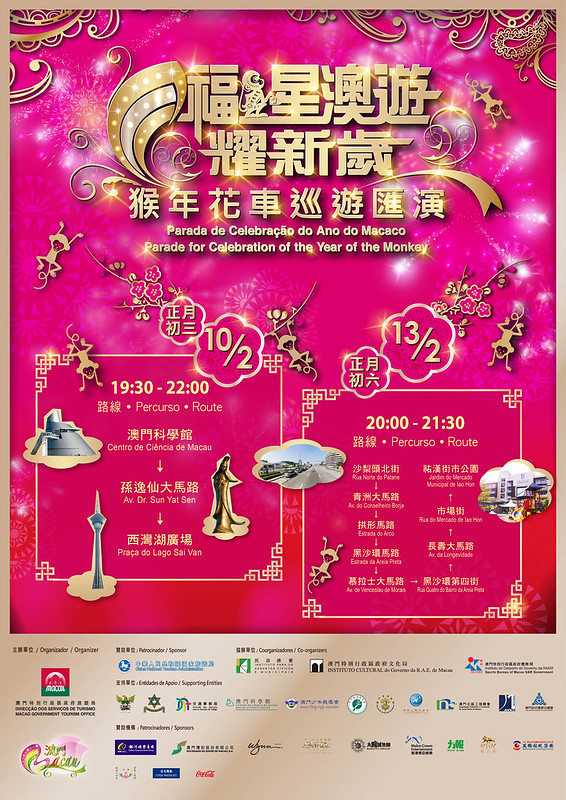 A Story behind the CNY Parade

To bring out the zodiac sign “Monkey” in the city, the Parade this year revolves around a story about the Monkey King spending a Chinese New Year vacation with the Celestial Court in Macao. As the story begins, the Jade Emperor wishes to visit the earth for fun with his Celestial Court during Chinese New Year. Upon knowing that Macao hosts an annual float parade during Chinese New Year, he commands the Monkey King to visit Macao in advance to plan an exciting trip, before meeting the Celestial Court during the Parade. During the press conference, the Monkey King made a debut with 72 transformed faces featured in the 3D mapping show. A correspondent show will come into the spotlight at the Parade opening on the third day of Lunar New Year, a new highlight not to miss with spectacular effect.

The Parade features four major themes of performance as follow: “Fortune Stars to the World”, “Great Treasures on their way”, “Rhythm of Lucky Blessings” and “Prosperity & Success fills the Year”. This year, the Parade is joined by 14 floats, 28 local groups as well as a total of 9 performance groups from different places including Mainland China, Hong Kong, Korea, Japan, Malaysia, Thailand, Portugal, Spain and the United States. The event involves 1,338 performers in total. 475 staff workers and 699 volunteers will assist in the Parade, adding up to 1,174 persons in total.

Numerous local singers will join with famous singers Pakho Chau, Alex Fong and Stephy Tang from Hong Kong to make a fantastic show on the third night of Lunar New Year. Being invited to host the show, Hong Kong celebrity hosts Luk Wing and Kitty Yuen are expected to further liven up the ambience on the night.

Along the same route as last year, the Parade on the third day of Lunar New Year will kick off with a launch ceremony in front of Macao Science Center at 7:30 p.m. The procession will wend through Avenida Dr. Sun Yat-Sen in Macao and reach the destination at Sai Van Lake Square in front of Macau Tower. To enable residents and visitors to arrive conveniently for the Parade, MGTO will operate free shuttle bus service around seven routes on Macao Peninsula, Tapia and Coloane, between various districts and designated Parade venues. In addition, the Office will set up spectator seating at four points along the Parade route, where performance teams will halt for show time. The four sets of spectator seating are located at the squares in front of Macao Science Center, Kun Iam Ecumenical Centre and Rua da Torre de Macau as well as at Sai Van Lake Square, with about 2,000 seats in total. To bring out the theme, the four sets of spectator seating are named Mountains of Flowers and Fruit, Waterfall Cave, God of Fortune Palace and Imperial Court. At 7:30 p.m. there will be live broadcast of the Parade on LED screen at Sai Van Lake Square, and stage performances will begin at 8:45 p.m. Part of the parading procession will join the stage performance upon arrival at Sai Van Lake Square as well, followed by a fireworks show at 9:45 p.m. The whole event will come to an end at 10:00 p.m.

On the night, MGTO will live broadcast the Parade on LED screens at nine locations as follow: Friendship Square, Macao Science Center Roundabout, Iao Hon Market Garden, Park of Dr. Carlos d’Assumpção, Avenida Panorâmica do Lago Nam Van, Tap Seac Square, Largo dos Bombeiros, Rua de Pedro Nolasco da Silva and Macau Tower so that the audience can enjoy the whole Parade. At the same time, TDM and Macao Cable TV will live broadcast the Parade and record the show for subsequent broadcast; a special program about the Parade will be also broadcasted on TVB Jade channel and High-definition Jade channel in Hong Kong at 10:30 p.m. on 13 February and at 11:00 a.m. on 14 February respectively. In addition, TVB Satellite TV will broadcast the program at different places around the world, including Mainland China, Hong Kong, Indonesia, Malaysia, Singapore, Australia, New Zealand, the United States, Canada, the United Kingdom and Europe at different time intervals during 14 – 20 February.

Parade on the sixth day of Lunar New Year

The Parade on the sixth day of Lunar New Year will feature 14 floats as well and start with a kick-off ceremony at Rua Norte do Patane at 8 p.m. The parading procession will march through Avenida do Conselheiro Borja, Estrada do Arco, Rua Quatro do Bairro da Areia Preta until the finishing point at Iao Hon Market Garden, where performers including local singers and Hong Kong artist Vincent Wong will dazzle the stage.

To liven up spectators’ spirit, MGTO will give away a total of 24,000 small presents along the Parade routes on the third day and sixth day of Lunar New Year including fluffy monkey toys and hats, illuminated wrist bands and flashlight clappers for the Parade.

The 14 floats in the Parade will be showcased at Sai Van Lake Square and Tap Seac Square during 10 – 13 February and 13 – 21 February respectively. The floats will be brightened up with illuminations to allow photo opportunities for local residents and visitors from 6:00 p.m. – 10:00 p.m. during the above periods (adjusted time intervals on 10, 13 and 21 February).

Besides the dazzling float parade, MGTO will also roll out a “Macao Hunt” activity to look for the golden monkey from 1 – 28 February, encouraging residents and visitors to complete this interactive fun game on Wechat at four designated “Step Out, Experience Macao’s Communities” walking tour routes. Once completion, they can enter the lucky draw for a chance to win attractive prizes. To add more fun and color to the Parade night, locations are set up near each seating set for spectators to look for the monkey on the third night of Lunar New Year.

We love Macau and plan to visit the country again. If you want to read more about Macao, you can visit https://www.placesandfoods.com/category/macau