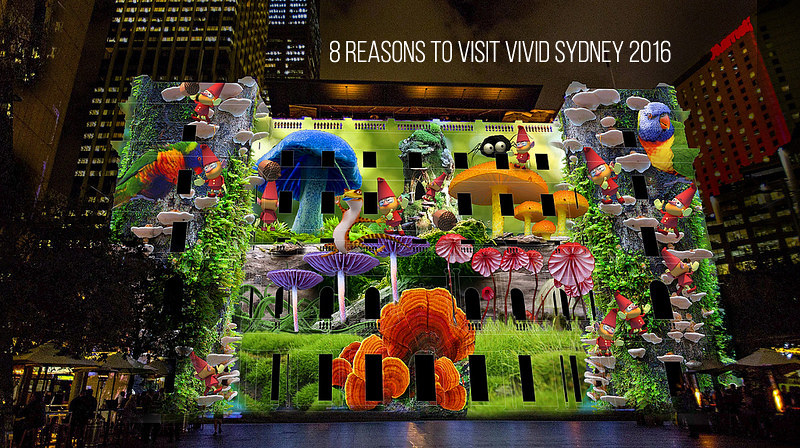 1.The longest ever Vivid Sydney

This year will be the longest ever Vivid Sydney as it will shine for 23 nights when it illuminates Sydney Harbour, new and much-loved precincts. Vivid Sydney runs from Friday 27 May to Saturday 18 June 2016, 5 more days than 2015. Thus, more days mean it is more flexible to book your dates to visit Vivid Sydney 2016.

Songlines is created for Vivid Sydney 2016.  In a Vivid Sydney first, the sails of the world-heritage listed Sydney Opera House will celebrate the rich and diverse work of Australia’s Indigenous artists through the projection, Songlines. This exceptional work of art is directed by Sydney Opera House Head of Indigenous Programming, Rhoda Roberts of the Bundjalung Nation of NSW, and brings together six Indigenous artists whose work illustrates the extraordinary connections between Indigenous astronomy and the natural world – the celestial and terrestrial Songlines that weave through time and distance, earth and sky.

Songlines is the recognition of Indigenous art and showcasing it during Vivid Sydney is to showcase their work to the world. This is definitely one of the key highlights of Vivid Sydney 2016.

The more venues, the merrier! This is good for visitors as you can plan your visits to the venues as there are more to experience.

For the first time, the Royal Botanic Garden Sydney and Taronga Zoo, will light up during Vivid Sydney in celebration of the monumental anniversaries both celebrate in 2016.

At Garden of Light, visitors will take a glittering journey through the Royal Botanic Garden Sydney as part of its 200th birthday celebrations. Grand installations will dazzle and delight including the impressive 60-metre long Cathedral of Light, made from hundreds of thousands of white LEDs which radiate gentle but brilliant light from all angles.

Taronga Zoo will be illuminated by larger-than-life multimedia sculptures of ten critical species ranging from the magnificent Asian elephant to the vividly coloured Corroboree frog, encouraging visitors to Be the Light for the Wild in Taronga Zoo’s centenary year and beyond.

From the artist impressions, the light installations for Royal Botanic Garden and Taronga Zoo is nothing less than spectacular!

The Sydney Conservatorium of Music will present The Sound Gardens: Vivid New Music performed by talented students with guest artists Natasha Anderson, Anthony Pateras and Clayton Thomas. Aussie hip-hop will be celebrated at Come Together @ Luna Park and One Day Sundays at The Factory in Marrickville. ARIA Hall of Fame inductees and 80s trailblazers the Models will join fellow chart-toppers the Machinations and a stripped down version of Dave Mason’s The Reels to present The Models, Machinations & The Reels for one night only at the Enmore Theatre.

Björk, the iconic Icelandic musician will debut in Vivid Music this year. Thus, Vivid Music will pulse through the city with new sounds and venues with highlights including the world premiere of Björk Digital, a new virtual reality project from the international avant-garde artist and the inaugural Curve Ball – a large scale live music and art event from Fuzzy Music, both held at Carriageworks.

At Vivid Ideas, the Game Changers Talk Series will be headlined by storytellers shaping the creative landscape including acclaimed director and producer Spike Jonze, House of Cards creator Beau Willimon, the creative force behind Orange is the New Black Jenji Kohan, and one of Australia’s most influential new creatives, Margaret Zhang.

Across the city, creative conferences will dive into the business of innovation and imagination with highlights including The Sunrise which delves into Australia’s start-up culture, an exploration of how technology and digital media can shape exciting, liveable cities at the Media Architecture Biennale 2016 and Conscious Change Makers, a dynamic summit exploring the idea that ‘good business’ is good for everyone.

Vivid Sydney, now in its eighth year is the world’s largest festival of light, music and ideas and is owned, managed and produced by the NSW Government’s tourism and major events agency, Destination NSW. Vivid Sydney runs from Friday 27 May to Saturday 18 June 2016. For more information visit www.vividsydney.com.

We checked in the SilverKris Lounge in KLIA which is reopened recently on 5th February 2016. It is a quiet and comfortable lounge with food, snacks and drinks.

We had a little snack at the SilverKris Lounge while waiting for our Singapore Airlines flight. Thus, we also enjoy the cozy sofas as well as the long tables good for savy and business travellers.

*Pictures are sourced from DNSW