What happened after we got scammed by taxi in Hong Kong?

It is a year after we got scammed and overcharged by a taxi in Hong Kong. It happened last year when we (my mother and I) took a taxi in Harbour City to go back to our hotel near Lan Kwai Foong. The taxi told us there will be additional charges after 9 pm. He covered his license with a newspaper and stopped his car and went down to open his boot so we couldn’t capture his license plate. You can read the whole ordeal at How we get cheated by taxi in Hong Kong.

Yes, even for a seasonal traveller like me got scammed but since I was with my mother, safety first. The story didn’t end there. Some of our Hong Kong friends advised us to report online at http://www.info.gov.hk/tcu/taxi/. Many of my friends said Hong Kong is a lawful city and taxi drivers wouldn’t harm the passengers. It is quite true until this happened recently, Hong Kong policeman dragged by taxi while trying to arrest cabbie for overcharging. So we did the right thing for not confronting the taxi driver at that moment? Who knows what can he do? 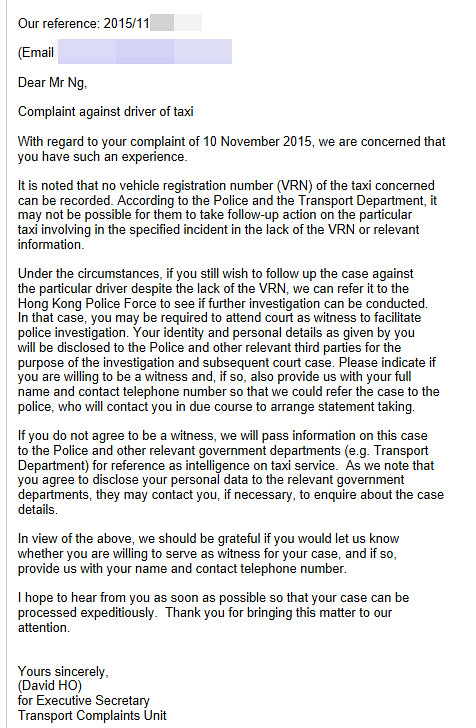 After the incident, we emailed to http://www.info.gov.hk/tcu/taxi/ and we thought that’s it. However, they responded and the case was referred to Hong Kong police. They made a police report on our behalf and our case now is up to the Hong Kong police. 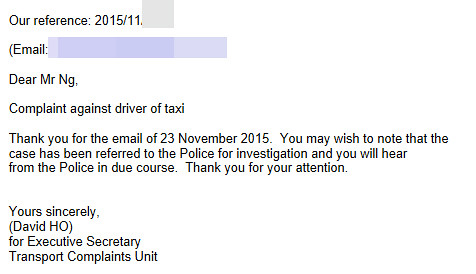 The story didn’t end there. A couple of weeks after our case was referred to police, we received a call from Hong Kong. A police officer from Hong Kong actually called me up.

He apologised to us as he told us they didn’t have enough evidence to find the taxi scammer. Thus, he said the Hong Kong police will do their best to arrest overcharging cabbies. You can tell they really did their job like the article we shared earlier. We had a lengthy chat with the police officer as he told us how he enjoyed fishing in Sabah and he loved to travel to Malaysia.

Even though the Hong Kong police didn’t manage to catch the culprit but we were glad how our case was handled. It was really very professional for the Hong Kong police to call us to explain the whole situation. Their complaint system really works and we were impressed. Where in the world, a police will actually call you for just a taxi scamming case? Probably only in Hong Kong.

Our taxi scamming case is quite isolated as we met many really good taxi drivers after that. Just remember there is no additional charges during night time or midnight. For the complete Taxi Fares structure, you can refer to http://www.td.gov.hk/en/transport_in_hong_kong/public_transport/taxi/taxi_fare_of_hong_kong/

We hope you can learn something from our taxi scamming ordeal in Hong Kong. Like we mentioned earlier, not all taxi drivers are bad but we were just unlucky. We learnt our lesson and we will be more alert while taking taxis anywhere in the world. We still love Hong Kong.

2 thoughts on “What happened after we got scammed by taxi in Hong Kong?”