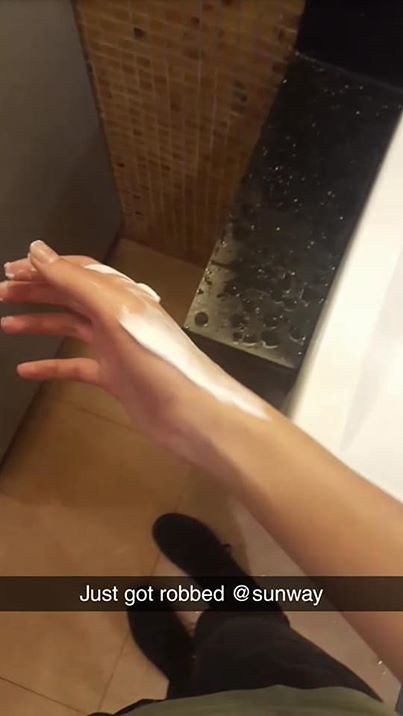 It happened at about 5pm, Friday 2nd February when I was alone at Sunway Pyramid mall.

I was at the Sunway Pyramid money exchange shop on LG2 because I was preparing to travel soon. After I had gotten my foreign currency, I put the cash in my backpack. When I was done with the currency exchange place, I decided to walk around and perhaps run some other errands while I was at the mall. While walking alone, I felt a slob of cream smothered all over my back on my right side. The cream was white and stained my shirt, jeans, and backpack. Some of it even got on my arm. Feeling really pissy and disgusted, I immediately turned behind and eyed a group of girls who had been directly behind me. They didn’t seem to have a clue about what had happened and probably weren’t even close enough to slap all that cream on me without being noticed. So I decided to wash it all off asap at the nearest toilet because I had no clue what this thing was. I headed over to the nearest washroom on my way which was opposite GNC (next to yubiso).

At the washroom. I washed off the gunk on my hand, then proceeded to get tissues to clean up my body. I took my bag off and laid it on the floor beside the sink (I get it, this was a mistake). As I was reaching out for the roll of tissues, a foreign man (I assume this to be true because he couldn’t communicate with me in Malay but in a foreign language) insisted on helping me clean up the mess. I politely rejected his offer and went on my way to grab the tissues. He immediately gets in my way and grabs the end of the tissue roll first. He still insisted on helping me and started pulling the roll over and over to get as much tissue to help me while taking his sweet time (I eventually figured this was a tactic to distract me and gave room for his buddies to target me). Soon after that, I noticed 2 men rushing through the space between me and my bag heading out of the washroom. I glanced over to the corner where I had put my bag seconds ago and find that it is no longer there. My first instinct was to chase after the men who had just left the toilet but as I ran out into the mall, they were no where to be found. I was pretty sure they had my bag because I saw them hugging it while running into the mall. When I realised that finding my bag was a lost cause, I rushed back to the toilet only to find that the initial man who wanted to help me clean up was also gone. There was literally no way for me to hunt down these men alone.

I’ve reported it to sunway pyramid’s security and made a police report. They were helpful in trying to get me access to the cctv room but unfortunately, there wasn’t any cctv nearby that could have caught any of these events. The closest cctv they had was at the money exchange place but I figured it was too far from where i was fished. (Tbh I think this is questionable because sunway boasts having lots of security cameras around the mall but not even one cctv in the corridor of shops??? That was surprising to hear.) Honestly, I wasn’t expecting much from these guys anyway. Btw, we eventually find out that the cream all over my shirt was just lotion or some hand cream. 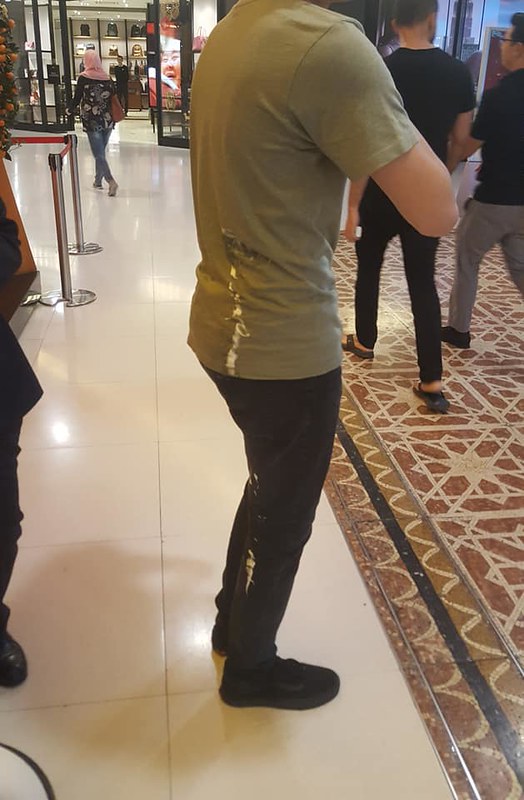 I’ve lost many important things in my bag besides the cash including my laptop and priceless debate notes. Thinking about this just frustrates me because I got played right into their hands despite noticing the strange signs all along.

Unfortunately this time I was a victim of daylight robbery. I’m making this post mainly to caution my friends of the cunning ways these syndicates are targeting their victims. Be alert at all times. It really can happen to anyone at anytime and in every way. They made me feel cornered, isolated, and even helpless when no bypasser would help me out because it all happened so fast.

TLDR: I was robbed in broad daylight. You should be extra careful when alone in public.

This happened in Sunway Pyramid but it can happen in any other shopping malls in Malaysia. We often change our money in money exchange counters in malls as we felt safer and with this case, it is not the case anymore. There are people probably watching from far near money exchange counters and will find a chance to strike when we are alone. This could happen on ATM machines too, who knows?

These people work in a team so when you caught one of them, you don’t have the evidence as the team members ran away with your belongings.

Just be vigilant when you are going to the money exchange counters or withdraw money from ATM machines in malls. It could happen here in Malaysia and other places too.