Ten years ago, there was a project called Vivid Sydney. The idea is to transform the city into life with colours and lights. The festival of light becomes one of the most anticipated annual events in Australia. From lights, it evolves to music and ideas. Vivid Sydney has become the world’s largest festival of light, music and ideas. Over the next 23 days and nights, Australia’s largest event will transform the city into a colourful showcase of illumination, sensational sounds and creative thinking from 25 May to 16 June 2018.

Sydney burst into breathtakingly brilliant colour as the lights switched on for the 10th anniversary of Vivid Sydney. This is Vivid Sydney 2018!

Read: Top 10 Reasons Why You Must Visit the Blue Mountains

The ‘Lights On’ moment, marking the start of the festival, saw all eyes turn to the world-famous Sydney Opera House for the Lighting of the Sails, created this year by award-winning Australian artist, Jonathan Zawada, and featuring fantastical digital sculptures of everyday objects and natural specimens that evolve, dissolve, and metamorphose.

New South Wales (NSW) Premier, Gladys Berejiklian said, “It’s always such a great feeling to see the city light up in a spectacular symphony of colour and movement, and we can’t wait to see all the moments that will excite and delight visitors who are coming to enjoy Vivid Sydney’s 10th anniversary celebrations over the next 23 days and nights.”

NSW Minister for Tourism and Major Events Adam Marshall said Vivid Sydney was an opportunity to showcase not only Sydney, but the entire State.

“Vivid Sydney is more than just a captivating light, music and ideas festival – it drives our economy, attracting hundreds of thousands of overnight visitors to our State,” Mr Marshall said. 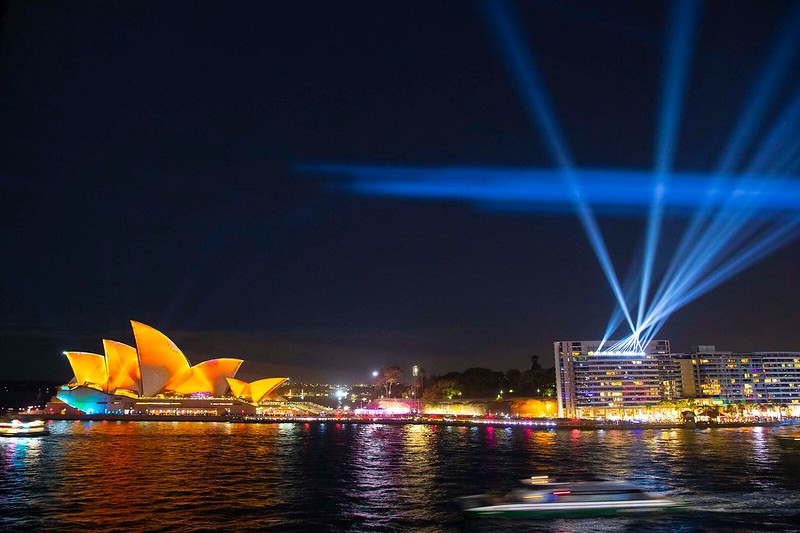 “Nearly 38,000 visitors to Vivid Sydney last year chose to extend their stay in NSW and travel beyond the fringes of Sydney, staying more than 94,000 nights and injecting over $16 million into the State’s regional economy.

“The NSW Government has worked hard to ensure NSW is the tourism and events capital of Australia and Vivid Sydney showcases our global city to the world, reinforcing Sydney’s position as the home of creativity, culture and innovation.” 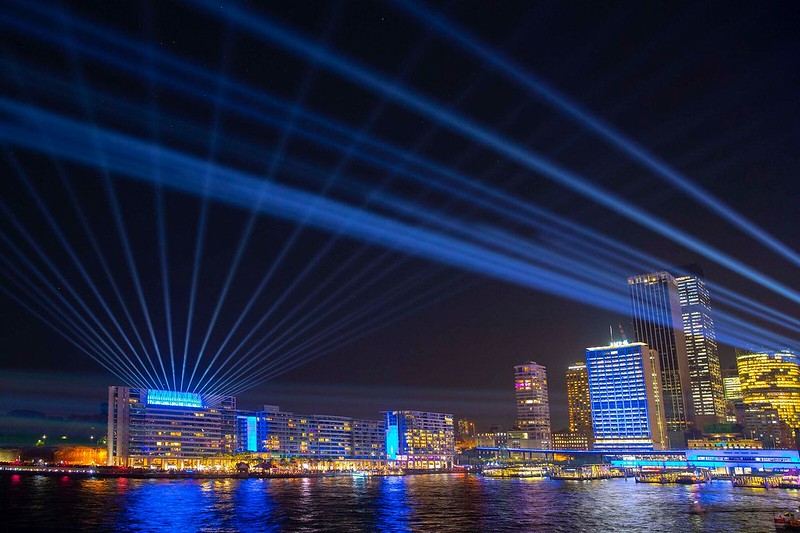 Creative Director for Vivid Sydney, Ignatius Jones added, “Vivid Sydney is all about art meeting technology and throwing in a little magic on top of it all to entertain visitors. This year the creative visions of local and international artists have been brought to life as large-scale and interactive installations and projections that transform iconic buildings, landmarks and landscapes; from the Sydney Opera House and Sydney Harbour Bridge, to the natural canvases at the Royal Botanic Garden Sydney and Darling Harbour. We invite everyone to join our colourful celebration of creativity and community.”

Vivid Sydney’s festival of light, music and ideas is the largest of its kind in the world and the largest event in Australia. Here are some of the program highlights for this year’s event.

It’s ‘Lights On’ at 6pm each night (and 5.30pm at Chatswood and Taronga Zoo), as Sydney’s architecture and open spaces become the canvases for mesmerising art projections and interactive installations. Highlights not to miss include:

The Vivid Music program will provide a pulsating soundtrack to the festival with a line up of some of the world’s best local and international contemporary artists taking to stages throughout the city. Highlights not to miss include:

Australia’s most thought-provoking conversations are on the agenda with groundbreakers from technology, science, art, design and culture gathering to explore new ideas and cultivate fresh thinking through forums and workshops. James Cameron headlines the program this year and will speak in front of a sold out crowd. Highlights not to miss include:

Vivid Sydney is now officially Lights On, so come and experience all it has to offer over the next 23 days and nights.

We have not experienced Vivid Sydney yet but we have plans for it the near future. If you are going to Sydney for this winter, experience the world’s largest festival of light, music and ideas like you never before.

For more festival details and program information, visit www.vividsydney.com or download the mobile app on IOS or Android. There’s a new augmented reality function and experience in the app, including access to a hidden art gallery at Fitzroy Gardens in Kings Cross.

Stay connected to social media channels for Vivid Sydney for all the latest updates and for last minute advice on getting around the city and Vivid Sydney precincts.