There are two ways to go to Mae Hong Son. Drive from Chiang Mai passing by Pai for one of the most adventurous road trips with roads of hundreds of turns or take a flight from Chiang Mai. We took the plane.

Wat Jong Kham and Wat Jong Klang are ancient temple of Mae Hong Son town and they are located by the Chong Klang Lake.

Watch the video we taken as we walk from Wat Jong Klang to Wat Jong Kham.

Next, walk a little more at Wat Jong Klang. There is a replica of Phra Phuttha Sihing installed on an altar. Thus, there are also several interesting items such as wooden figurines of humans and animals depicted in the Phra Vejsandon Jakata (pronounced Cha-dok which means one of odd stories of former incarnations of the Buddha) created by Burmese craftsmen and brought over in 1857. 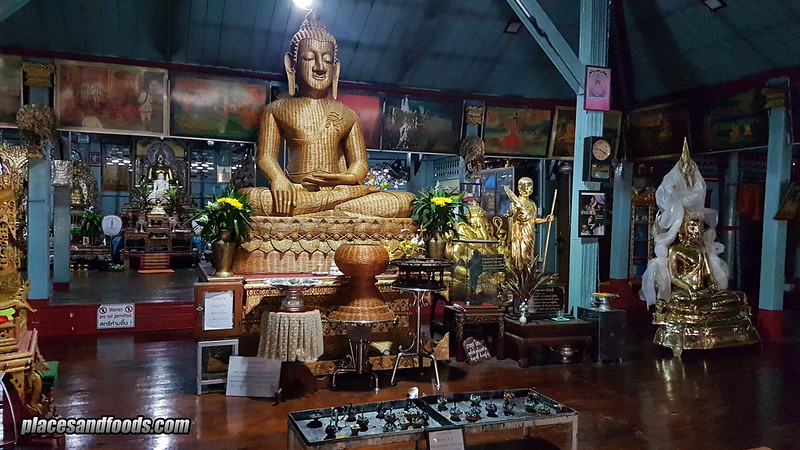 There are paintings on glass on Jakata and on Prince Siddhartha, as well as on the ways of life of the time.

As you see in our video, the temple with beautiful silver architecture is Wat Jong Kham. We read that Wat Jong Kham is the oldest temple of Muang Mae Hong Son and it was built over 200 years ago by the Tai Yai (Shan) people. The uniqueness of the architecture is the 9 later roof in the castle style. The temple looks like wooden house with a bit of similarity with our traditional Malay houses.

It was originally built in 2817 by Tai Yai artisans during the rule of first governor of Mae Hong Son, Phraya Singharat Racha. The original wooden temple buildings were damaged in a fire in 1970 and what you see now it’s a rebuilt.

We didn’t enter this temple but we read that it houses a large Budhha statue cast by Burmese craftsmen in 1926. This is a replica of the statue in Wat Suthat in Bangkok.