My third run in my life and of the year. Craziest thing to do was, we drove all the way to Penang to join this run. I ran 6km and wife, Rachel ran for 26km. 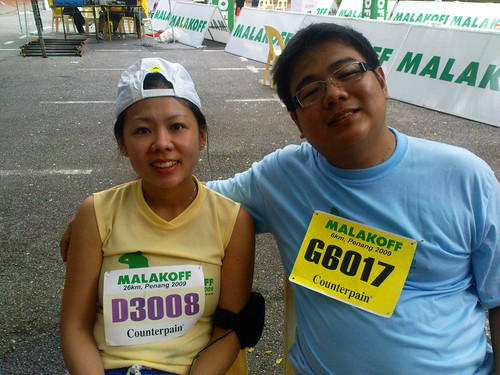 My run started at 6.30 am. The first few km was easy, later on I realized I was gasping for air. As we were running near the sea, the air contains salt and the air was drier. The result was lesser oxygen and hotter. I practically gave up on 3km and started to walk back. I almost finished last this time around. The other reason was fatique. On Saturday I drove around 4-5 hours from KL to Penang and that excludes the whole day trip we had in Penang. Anyways I finished the run lamely in 58 minutes. Damn paiseh.

So then, I waited there for Rachel as she participated the 26km run. She started at 5.30 am. I sat at the finishing area from 7.30 am to 9.00 am. I saw quite a number of people finishing the 26km run. In fact, there were a few people finished the 26km run before I did. Damn shy. Around 9.00 am, I saw an ambulance came in and I saw Rachel got out from the ambulance. I was worried, I ran over to the first aid area. Rachel was very pissed. She told me the run was more than 26km and she was totally exhausted. Rachel ran 23km. I’m proud of her as she can easily participate 1/2 marathon by now while I’m still struggling for 6km.

No matter how, it was a good run. I’m in need of time to practice for end month’s Standard Chartered Run. Time’s running out!