Eason Chan (陳奕迅) is a Canto-Pop (Cantonese Popular) singer and actor from Hong Kong. You might wonder is how he related to the town of murals, Sheffield in Tasmania.  Continue read on you will get the idea. 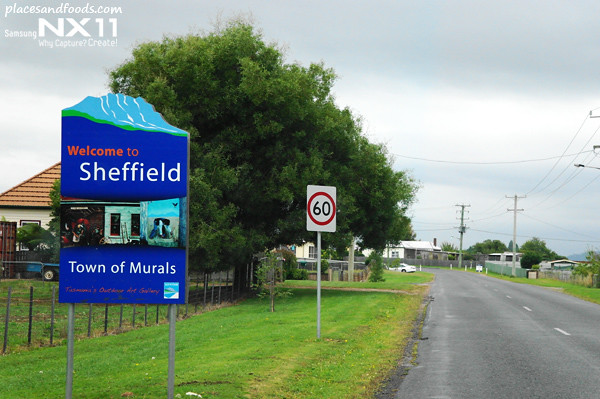 Welcome to Sheffield, Town of Murals…
First all, this is not the Sheffield in United Kingdom. This Sheffield is located in Tasmania Australia and it is known as the town of murals.

The town’s walls are beautifully painted with mural art. This is my second experience seeing such colourful painted walls. My first experience was at La Boca in Buenos Aires, Argentina.

Sheffield is situated 23 km inland from Devonport on the north-west coast of Tasmania. It is nearer to Launceston than Hobart.

How and why did the town painted with murals?

Inspired by the story of Chemainus, a small Canadian town that had through mural art, rescued itself from ruin, the Kentish Association for Tourism (KAT) worked valiantly on the vision to combine the arts and tourism to revive and reinvent the town of Sheffield.  – Wikipedia.org

Beautiful painted Chapel, taken with Samsung NX-11 with panoramic function, click to enlarge it.
Sheffield has become a major tourist attraction due to it being promoted as a “Town of Murals”,based upon the instrumental contributions of the Kentish Association for Tourism (currently known as Sheffield Inc) and local tourism pioneer Brian Inder.  – Wikipedia.org 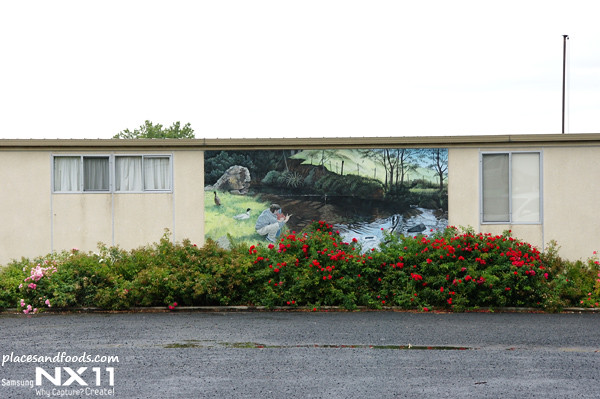 One of the painted walls in Sheffield. This is a house in Sheffield.
The first town mural was painted in Sheffield in December 1986. Since then over 60 murals depicting the area’s rich history and beautiful natural scenery are painted on walls scattered throughout the town and buildings along the roadside. The murals attract an estimated 200,000 people to the town annually.  – Wikipedia.org

Skating ring in Sheffield, taken with Samsung NX-11 with panoramic function, click to enlarge it.
In the heart of Sheffield, there are a number of studios open to the public where visitors can watch the artists as they do their work. There are artists of every discipline, including photography, fine art, glass, woodcraft, pottery, ceramics and specialised crafts.  – Wikipedia.org 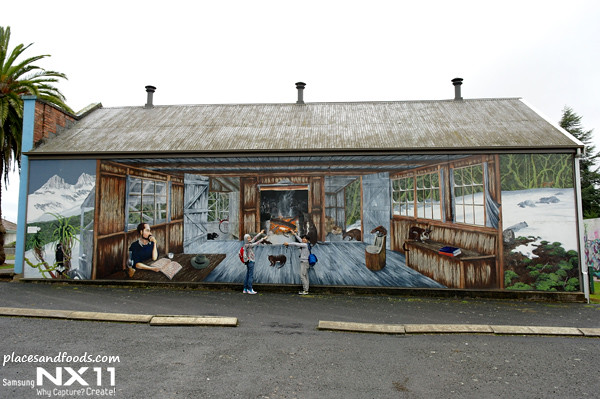 Another beautiful mural. I stopped here under the rain and took this picture.
The International Mural Fest art competition has been held annually since 2003 and returns in April each year. A poem is selected which the artists use as their inspiration. After each competition the 9 finalist murals remain on display at Mural Park for approximately 12 months until the next competition.In 2012, an interactive mural and workshops were added to the artistic activities of the festival for the Mural Fest 10th anniversary celebrations. – Wikipedia.org 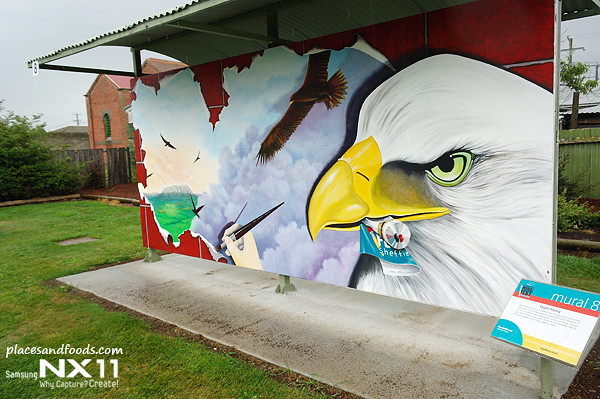 One of the murals for the International Mural Fest 2012.
Tourism boosts the economy and brings money into the town. The success of Sheffield as a mural town is not accidental but a well plan project. 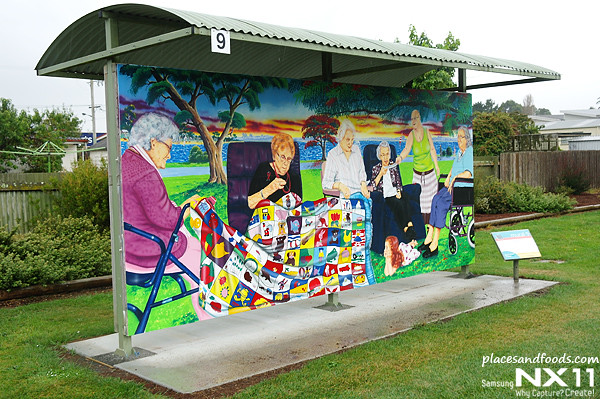 One of the murals for the International Mural Fest 2012.
I always believe that innovations and creativities can bring changes and prosperity. Who would ever believe that there is such a unique town with such concept in Tasmania? 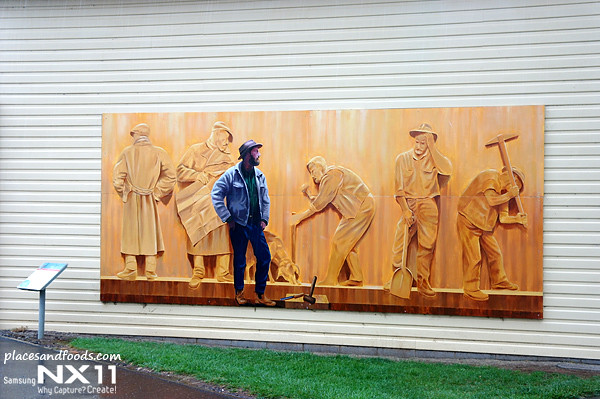 One of the murals for the International Mural Fest 2012.
It was not the best day when I visited Sheffield. The weather was not forgiving and it was raining cats and dogs. I tried to venture as much as I can under the rain. I’m blessed that my Samsung NX-11 camera can withstand the wetness even though it is not weatherproof. I was covering the camera on one hand and snapping the pictures with another. A big hand for Samsung NX-11!

So now, why is Eason Chan (陳奕迅) related to Sheffield?

Did you know that the town invited Eason Chan (陳奕迅) to paint his mural in Sheffield? Yes, it is the truth and we have his creation as well. 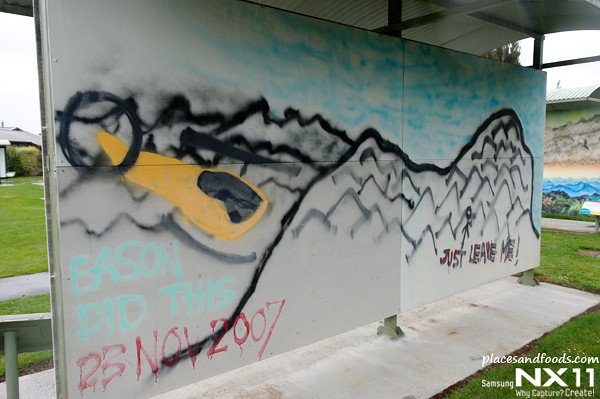 This is NOT one of the murals for the International Mural Fest 2012. This is painted by Eason Chan himself.
The participation of Eason Chan (陳奕迅) attracts many Chinese tourists as he has many followers from Malaysia, Singapore, Indonesia, Hong Kong, Taiwan, Canada and China. This was a brilliant idea because Asia is an emerging market in the world. Hence, you can witness many Chinese tourists flock to many destinations around the world. 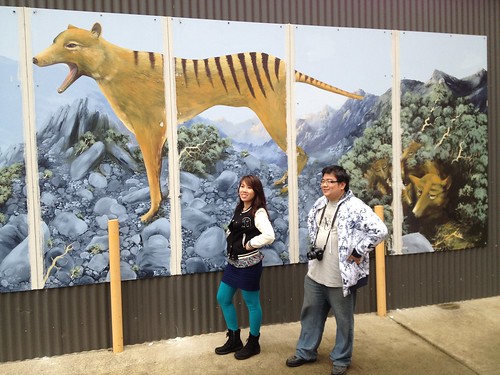 Yes, that is the Tasmanian Tiger. It has extinct due to mass hunting many decades ago. Picture credit to http://stieglitzsisters.com/

Sheffield is just one of the attractions in Tasmania and it offers more than we thought. Discovering Tasmania is more than just an adventure, it offers breath taking views and unique experiences. Sheffield is one good example of it. Discover Tasmania, Love Tasmania!

2 thoughts on “Eason Chan and Town of Murals, Sheffield Tasmania”