Fans of K-POP (Korean Pop) will have something to cheer about as there is one special Korean chef to be featured on our TV sets soon. It is the Jamie Oliver of Asia, Korean Chef Edward Kwon.

Life Inspired and Maybank launched a brand new television series, featuring Korean celebrity chef Edward Kwon who packs up his charm and culinary skill in a single backpack for a trip of a lifetime around Asia.

Aptly titled, “EdVentures In Asia”, the series began airing on 27th May 2012 and continues to air every Sunday at 9pm MY/HK. This 13-episode series is a result of a partnership with Maybank as the presenting sponsor and in collaboration with Star Publications. 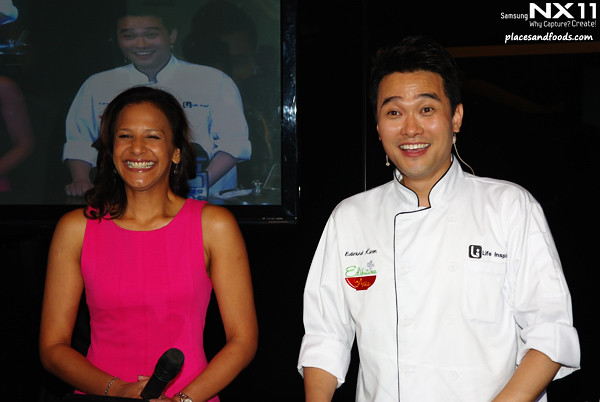 Korean Chef Edward Kwon entertaining the crowd…
In the series, Chef Kwon embarks on a gastronomic adventure across Asia for one purpose: to globalize Korean cuisine by creating new dishes consisting of local fare infused with Korean elements. Chef Kwon will visit chefs from around the continent and experience the myriad of tastes that they offer. From making stock out of a lamb’s head with Mongolian nomads to catching mud crabs with his bare hands in Manila, he will hit locales from the well-known to those off the beaten path and points in between. The adventurous chef will then use what he’s seen and learnt to experiment with age-old recipes.

Countries featured in EdVentures In Asia include Manila in the Philippines, Singapore, Jeonju in Korea, Nha Trang in Vietnam, Osaka in Japan, Hong Kong, Macau, Ulan Bator in Mongolia, Beijing in China, Kuala Lumpur in Malaysia, Bangkok in Thailand, Jakarta in Indonesia and Delhi in India. 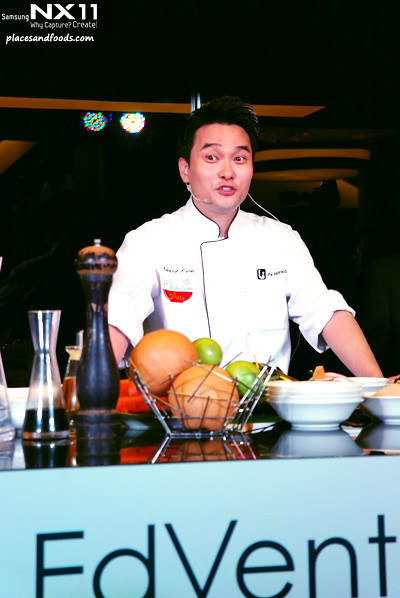 Korean Chef Edward Kwon talking about his past and his adventure as a chef…
Chef Kwon is the former hotel head chef of the Burj al-Arab Hotel in Dubai, known as the world’s only ‘seven star’ hotel. Born in Gangwon-do Province in Korea in 1971, Kwon’s initial ambition was to be a priest, but he gave that up to honour his late grandmother’s last wishes. Singer Barbra Streisand once offered him a job as her personal chef, while former US president George W Bush went into the kitchen to personally shake his hand. Chef Kwon has also cooked for the likes of Madonna, Pierce Brosnan, Maria Sharapova, George Clooney and Tiger Woods.

Currently, Chef Kwon serves as Seoul’s global goodwill ambassador, as well as Korea’s tourism ambassador. His book ‘Cooking Seven Stars,’ became a best seller in the fall of 2009. His new restaurant, LAB XXIV (Lab Twenty-Four), is located in Seoul’s prestigious Cheongdam-dong area, and is also planning to open another 200-seater restaurant in Seoul this year. 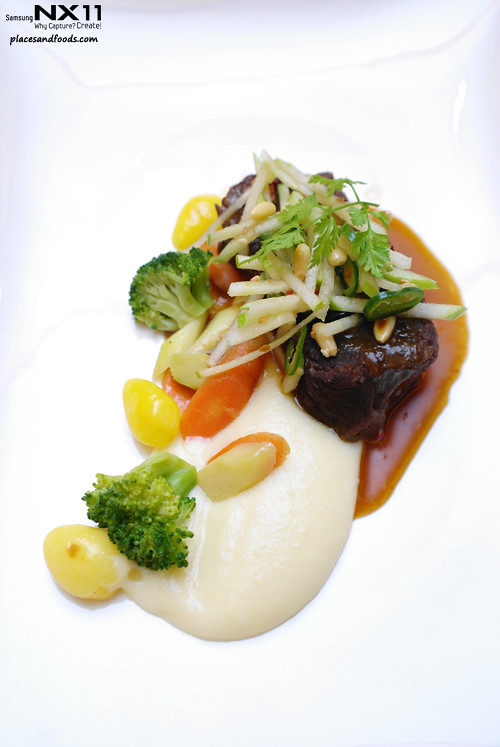 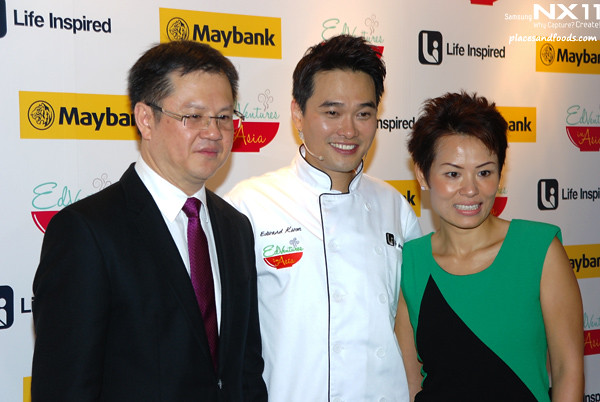 Mr. Lim Hong Tat, Deputy President and Head, Community Financial Services of Maybank said, “This partnership is part of our ongoing efforts to add value to our customers through a diverse range of lifestyle activities. Our customers will have the opportunity to watch him in action and taste his food in an exclusive dinner event live in Kuala Lumpur when they sign up for selected Maybank products or be the top credit card spenders from now until 31st July 2012.  In addition to that, we are confident that our partnership will enhance brand equity and create better visibility for Maybank in the region. It also echoes our mission to humanise financial services across the region as the series enriches people’s lives and will even bring us closer to the heart of communities.” 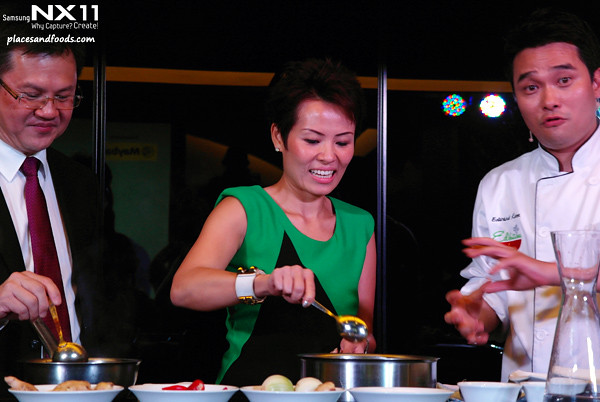 Ms. Anne Chan showing her culinary skills as the chef looks on.
Anne Chan, General Manager of Life Inspired said, “EdVentures In Asia is a charming show featuring Chef Edward Kwon, a unique personality with a strong passion for making good Korean food accessible to everyone. Chef Kwon’s previous programmes such as ‘Edward’s Live Kitchen” and “Yes, Chef!” enjoyed high ratings on our channel and I’m confident that Chef Kwon will continue to connect well with our discerning viewers.”

She adds, “This is our third original production since the channel launched three years ago. We are excited to have Maybank join us on this journey as we continue to produce content that speaks to Asian palettes and Asian lifestyles. The previous successes of all our original productions is testament to how our lifestyle content has grown throughout the years, providing quality, stylized programmes in high definition.

We had fun at the event as the cheeky Chef Edward Kwon entertained his guests. The food was equally good and the Wagyu short rib was delicious. 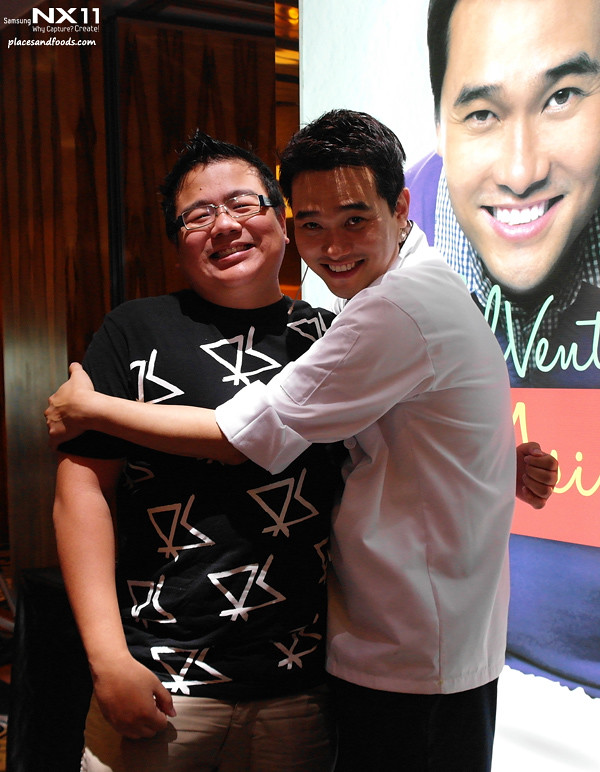 I got bear-hugged by the chef, he is a charmer.
He is definitely an eye candy for the ladies and frankly he is a humble and friendly chef. He walked through tables and make sure everyone was well taken care off.

Chef Edward Kwon will grace the city of Kuala Lumpur once again in September, where he will play host to an exclusive dining experience, especially catered for Maybank customers. Further to that, Maybank customers will also be given special offers on the Edward Kwon cookware range.