Last weekend, I was in Penang for a unique food trail experience with Chef Michael Han from Singapore hosted by Hennessy X.O. Malaysia. In total, we went to five places to taste five local Penang favourite foods. 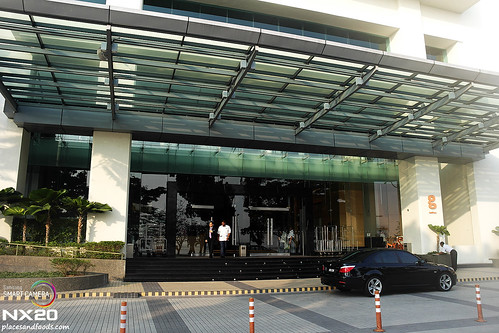 This was where we stayed, the G Hotel Penang.

We were the crowd puller as we travelled in the heart of Penang Island to hunt for the local favourites. The good looking Singaporean chef was an eye candy. The soft spoken and camera shy chef was busy taking notes and tasting food and often I saw him whispering ideas to his assistant during the food tour. It will be a challenge for Chef Michael Han to create his version of Penang local favourites with his style and technique paired with Hennessy X.O. 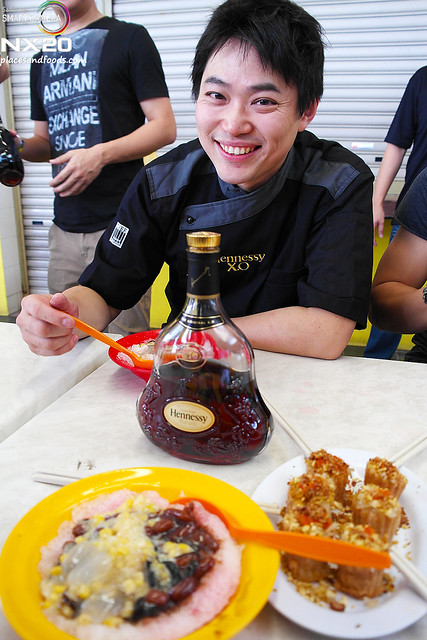 Do not deceive by his young appearance as his age is a decade older than how he looks. This law graduate did not practise law but his instead pursued his dreams to be one of successful chefs and he has worked in some of the finest restaurants in Europe which includes The Fat Duck, L’Enclume and Anthony’s in England, Mugaritz in San Sebastian, Spain and Noma in Copenhagen, Denmark. His cooking style reflects both his personality and broad range of training. It also underlies his openness to using a wide range of ingredients from both Europe and Asia. 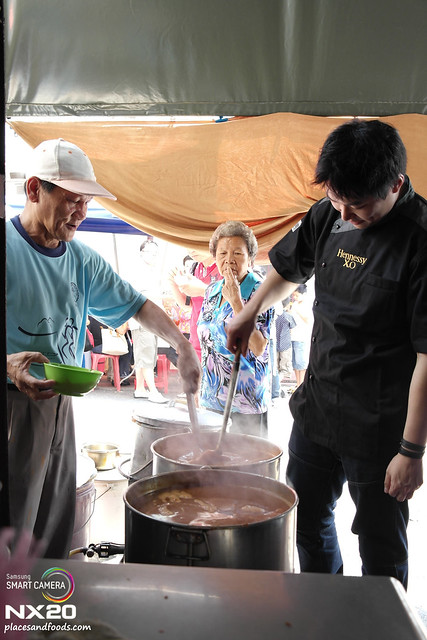 Chef was checking the broth while the rest looked on.

As our bus picked up Chef Michael Han from the G Hotel, we went straight to Penang Road for our first stop. It was not for the cendol but for the asam laksa. Voted as one of the best street food in the world by CNNGo.com, asam laksa is a favourite food to many Malaysians. Asam is tamarind and it is used for the soup. Penang’s version of asam laksa is heavily influenced with the shrimp paste while the taste is a mixture of sweet and sour with different textures. It is a true gem of Penang and Malaysia cuisine. 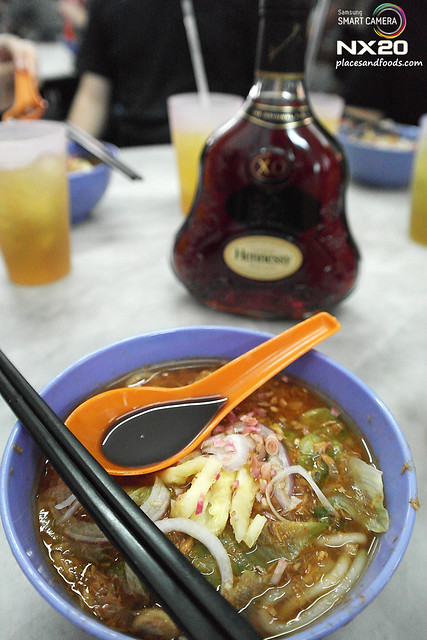 Asam Laksa, one of the best Malaysian food. 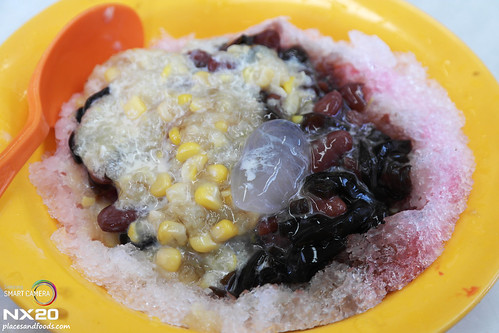 Next was the Lee New World Ice Kacang. Ice kacang is a popular dessert with mainly using shaved ice with red beans, jelly, peanuts, corn and strongly flavoured with rose syrup. You can find some ice kacang with brown sugar or even durian. Something was definitely missing, a scoop of smooth vanilla ice cream that is usually found at the top of the ice kacang. 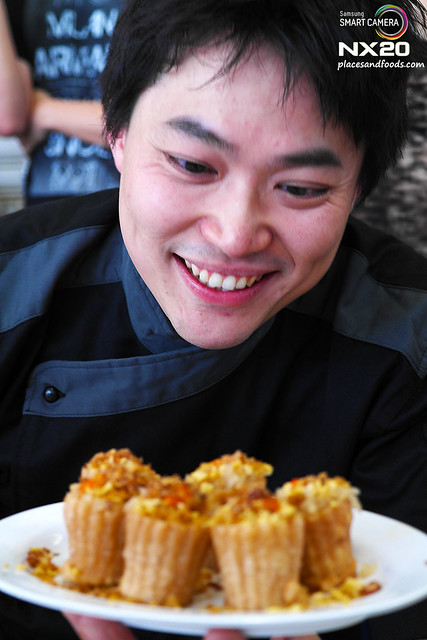 Chef Michael looks at the Pai Tees.
The pai tee or sometimes you called it as top hat. The base is deep fried crunchy cup-like pastry and its fillings are a cooked Chinese turnip and topped with fried shallots, diced carrots, fried egg and peanuts. There was nothing extraordinary about this two but anyways the chef enjoyed it. 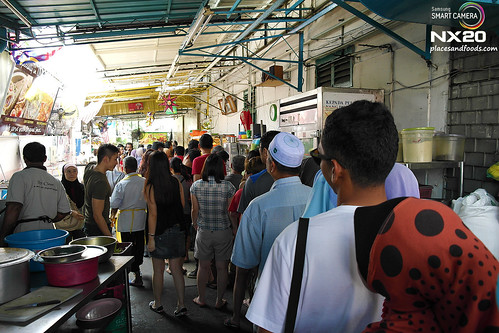 The line was definitely “not clear” at Line Clear Nasi Kandar. 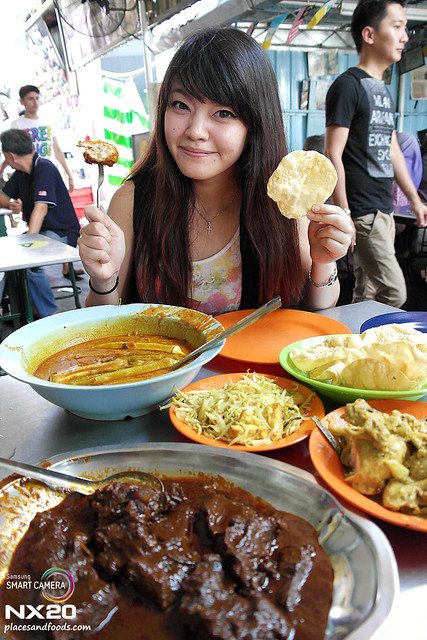 Fragrant white rice with many scrumptious side dishes to choose from, nasi kandar is best taken with their savoury curry dishes. Chef Michael enjoyed almost every single dish in Line Clear.

There are two outlets of Ah Leng Char Kuey Teow. The father and son team cooked in two different places, the father now only cooks at night in Air Itam while the son cooks at Jalan Zoo. We went to the son’s outlet as we didn’t have time for the night session. 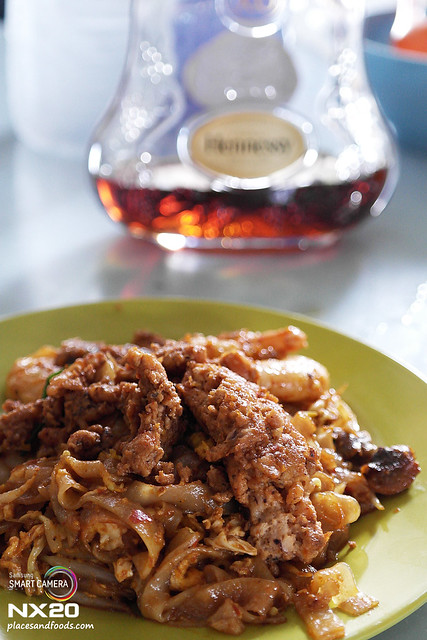 Ah Leng Char Kuey Teow is one of the best in Penang.

The Ah Leng CKT is one of the most popular CKTs in Penang and I have not tried this before. We heard enough of CKT fried with fresh duck eggs but Ah Leng’s version is a weird one. As I was told by fellow blogger friend Ah Bok, the egg was cooked together with minced mantis prawn. The CKT is slightly “wetter” than the usual CKTs and we tried to infuse it with Hennessy X.O and it worked perfectly. The Hennessy X.O. infused CKT was surprising fragrant with X.O scent and yet did not lose the taste of the CKT. A perfect combination made in heaven, well okay it was not so dramatic. To be frank, it did taste better with the extra oomph of the Hennessy X.O. 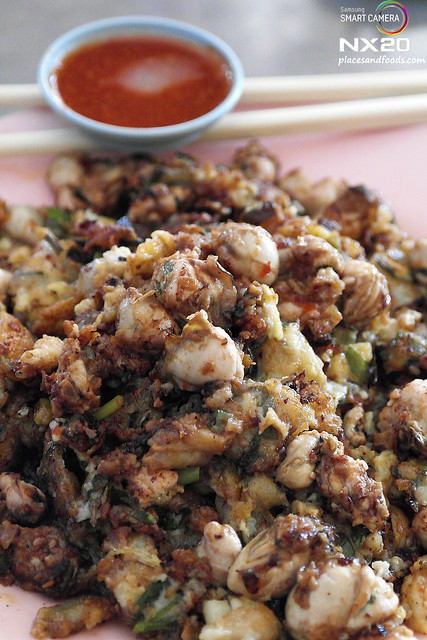 I have never encountered this type of oyster omelette in my life. They were generous with the oysters and the omelette was deep fried to light brownish colour.  The taste was not that bad but it was just too greasy. We tried to infuse Hennessy X.O with the food by sprinkled some of the X.O. on top of the omelette but the taste didn’t blend. The Hennessy X.O. works well with Char Kuey Teow.

After the food tour, all of us went back to the hotel for a quick rest before an interview session with the chef. In a quiet room, we threw the chef with a string of questions about his ideas and preparations for the big night at the end of the month. From the interview, we got to know he had a Penang nanny and she cooked the best Penang food for him. That is one of the reason why he is so in love with Penang food. 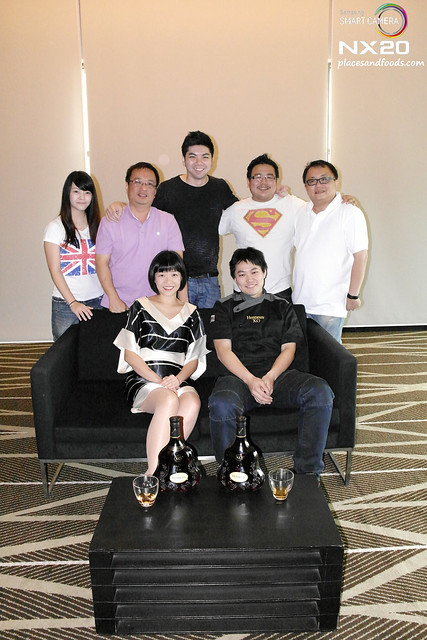 However, it won’t be easy for Chef Michael Han to deconstruct the local cuisine and reassemble everything again with his style and manner for the second Hennessy X.O Appreciation Grows Gastronomy event for the year, slated to be held in Penang within the chapel of St. Joseph’s Novitiate from September 26th to 28th 2012. Chef Michael Han is a European background and bred chef and reinventing his favourite Penang food with his style will be a challenge.  It will be a glamorous and interesting night at St. Joseph’s Novitiate end of this month as Chef Michael Han will present us his translation of Penang local cuisines. We will be looking forward to savour Chef Michael’s magical creations at Hennessy X.O Appreciation Grows Gastronomy 2012 in Penang.