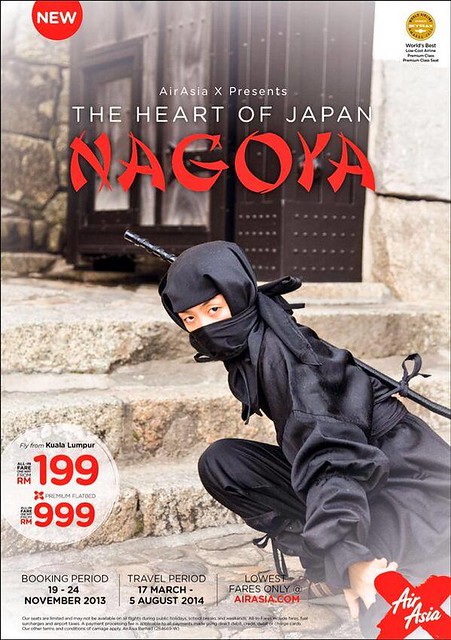 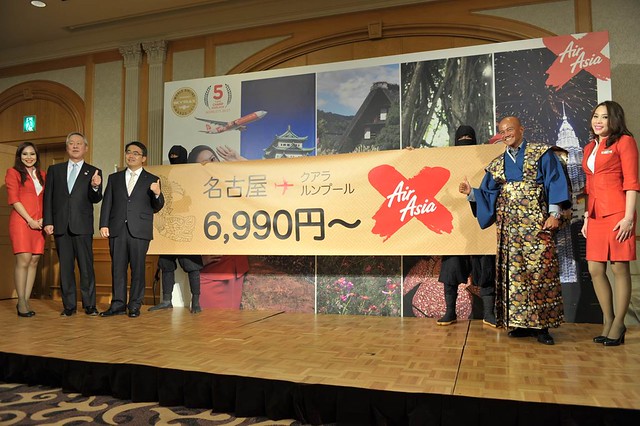 (From left to right :Hiroshi Kawakami, President and CEO of Central Japan INTL Airport Company, Hideaki Ohmura, Governor of Aichi Prefecture, Azran Osman-Rani, CEO of AirAsia X and AirAsia X Flight attendants)
Azran Osman-Rani, CEO of AirAsia X said, “We are excited to announce our latest route to Nagoya, marking our 3rd destination into Japan. This marks another milestone for AirAsia X and reiterates our expansion commitment in the key markets we operate in with the Asia Pacific Region. With the addition of Nagoya, guests will have more travel options to explore Japan, and we believe Nagoya being a scenic and historical destination will be a popular tourist destination. We have carried over half a million passengers to and from Japan. Japan contributed over 14% of our total revenue in the first half of 2013.”

“Nagoya is strategically located just 50 minutes from Osaka and 1 hour 40 minutes from Tokyo via train. Guests may soon fly direct to Nagoya, and take a train to the metropolitan and capital city of Japan; Tokyo or visit the commercial centre of Japan, Osaka in the Kansai region and return from any of the ports we serve in Japan. Nagoya has much to offer, be it for families or even the back packers, the choices of attractions are endless.”

“Japanese guest also will be able to fly to a host of destinations from Kuala Lumpur using AirAsia’s Fly-Thru service, which allows guests to easily connect between two different flights via the Kuala Lumpur Low Cost Carrier Terminal without having to worry about checking in twice” he concluded.

Nagoya, the largest city in the Chubu region, more famous as the birth place of Toyota was also the birth place of the 3 samurai’s who unified Japan in the 16th century.
Home to the famous Atsuta Shrine, considered to be one of the most venerable shrines in Japan, and the restored Nagoya castle which was then burnt down during World War ||.
Also famous for its abundance of cherry blossom trees during spring time, the region where Nagoya is located is known as an industrial powerhouse, supplying the world with automobiles, machinery, aerospace parts and a wide variety of other products. Also, the Chubu region is richly endowed with nature of ocean as well as of the mountains, such as Ise Bay and Japanese Alps.

AirAsia X was the first long-haul, low fare carrier to introduce Premium Flatbed seats, which have standard business class specifications of 20” width, 60” pitch and stretch out to 77” in full recline position.