It was an experience like never before. Can you imagine, how many people actually get to say that they were on board one of the most luxurious train rides, ever? 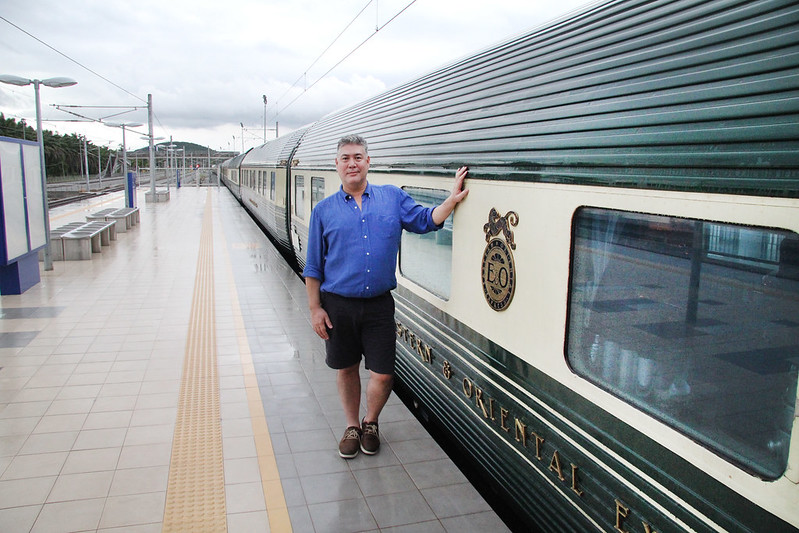 This unique experience is also somewhat based on a journey that Phang travelled in his popular television programme Jonathan Phang’s Gourmet Trains. Season 2 of the programme was aired on the Asian Food Channel, Astro Channel 703. Jonathan is no stranger to train rides – on his show, he gets to travel to places like Peru, Canada, Australia and Scotland. One can only imagine the sights he gets to see, and the people and food he gets to taste in each of the destinations. He crossed half of Canada and go through the Rocky Mountains, crossed the whole of Australia from Perth to Sydney, Queensland to Brisbane and it was just wonderful. I had a chance to catch Jonathan’s show and I must say, Scotland is the most interesting country and food culture so far! But then again, it is just my humble opinion. In one of the episodes he did try a crocodile curry dish – I wonder how that tastes like?! 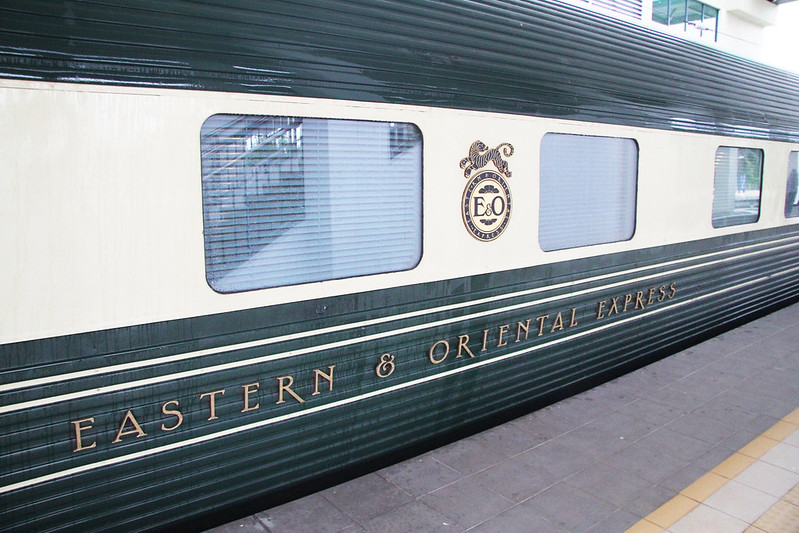 During the tour, Phang learnt about local produce and traditional fare while he enjoys a scenic ride with his fellow passengers.

Throughout this post, I will also let you in on little secret about Jonathan Phang that you need to know so be on the lookout for the little clues…sort of like a little fun fact about Jonathan and the tour.

Eastern and Oriental Express Day One: Singapore to Malaysia

The 3-day 2-night journey from Singapore to Thailand!

All contest winners and Jonathan Phang congregated at Raffles Hotel and enjoyed a signature Singapore Sling before they depart to the train checkpoint. 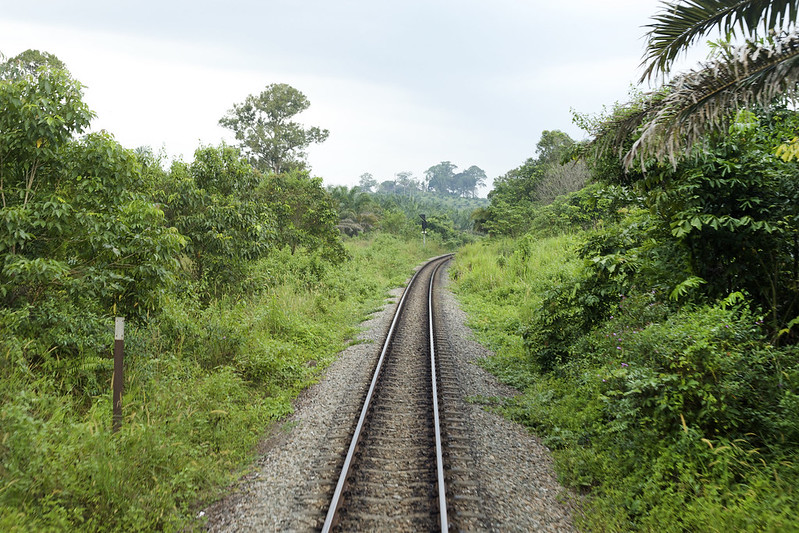 For the first day, Jonathan Phang departed from Singapore to Malaysia. It was truly a scenic view, and the journey is filled with “old and new” Malaysia with views of rainforest as well as plantations.

Fun fact number #1: Kuala Lumpur was the last leg of the tour with Asian Food Channel, but Jonathan is no stranger to Asia and he has experience travelling to Asian countries prior to this tour. Although I’m not too sure if he has been in Malaysia before, he did plan to get his hands on some good Roti Canai (one of his favorite local dishes). 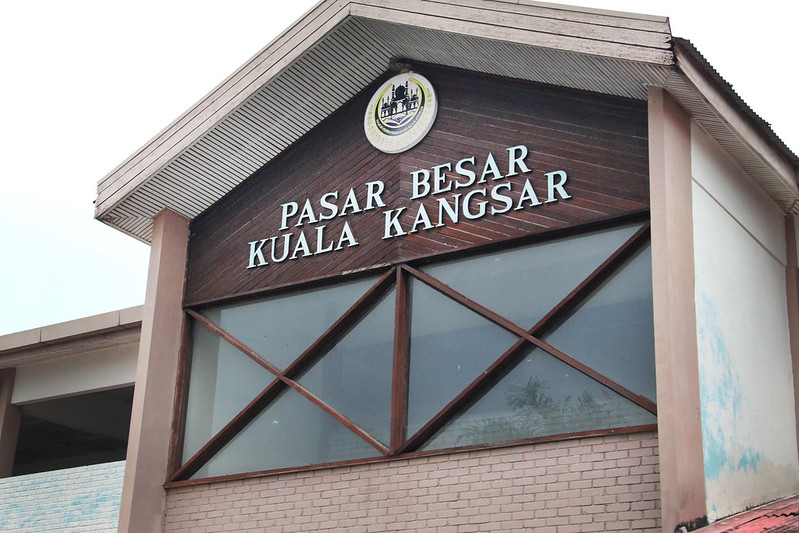 Chef Yannis and Jonathan selected ingredients for the dinner, but everyone there enjoyed seeing the different ingredients available. 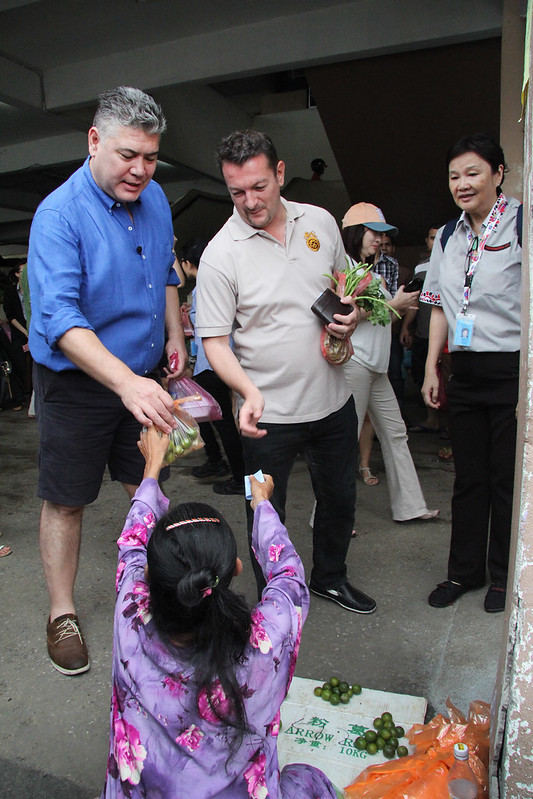 At the market, Jonathan and Chef Yannis purchased long beans to be used in the vegetable curry, coriander to be used in the Breaded Cod served with Mango Salsa, Red Pepper Mayonnaise and Mixed Leaves and small limes to be used in the Coconut and Pineapple Crumble Cake and Vanilla Ice Cream for dessert. I can already picture the dish in my head and there’s definitely one word for it, AMAZING! 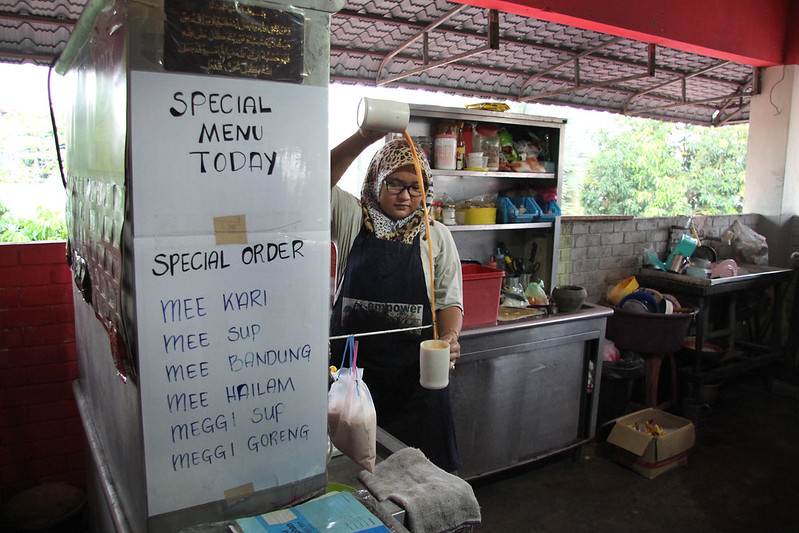 Along the way, Jonathan also visited a small food stall in the market that is known for their Roti Canai and Teh Tarik. While the Roti Canai had already sold out for the day, the shop owner shared how she made her fragrant Nasi Lemak and the traditional “pull” technique for Malaysia’s famed Teh Tarik. 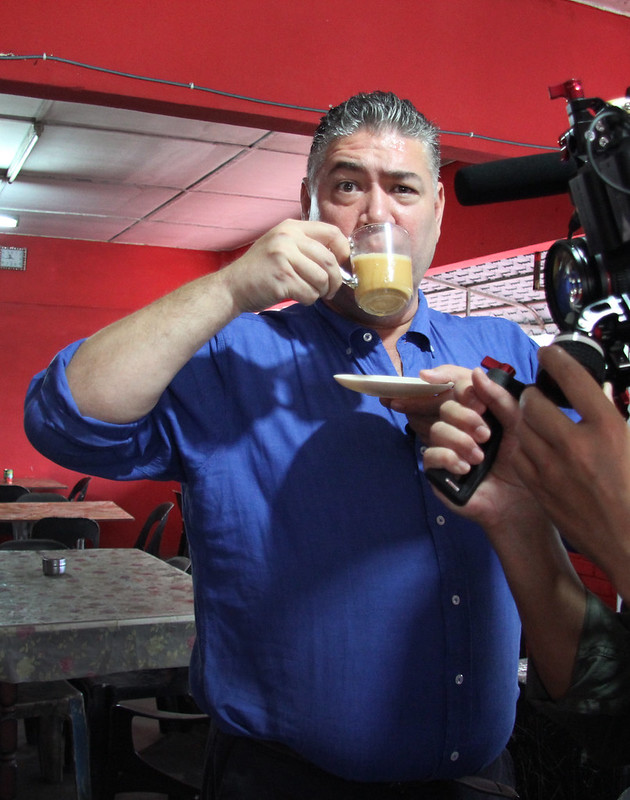 Fun Fact number #2: Jonathan didn’t try the Teh Tarik’s pull technique, but it will be quite interesting to see him doing it, don’t you think? Before heading off, the tour stumbled across a Durian seller. While Jonathan is no stranger to Durian, it was the first time for some of the guests of the tour! Everyone enjoyed a bite before the next destination. 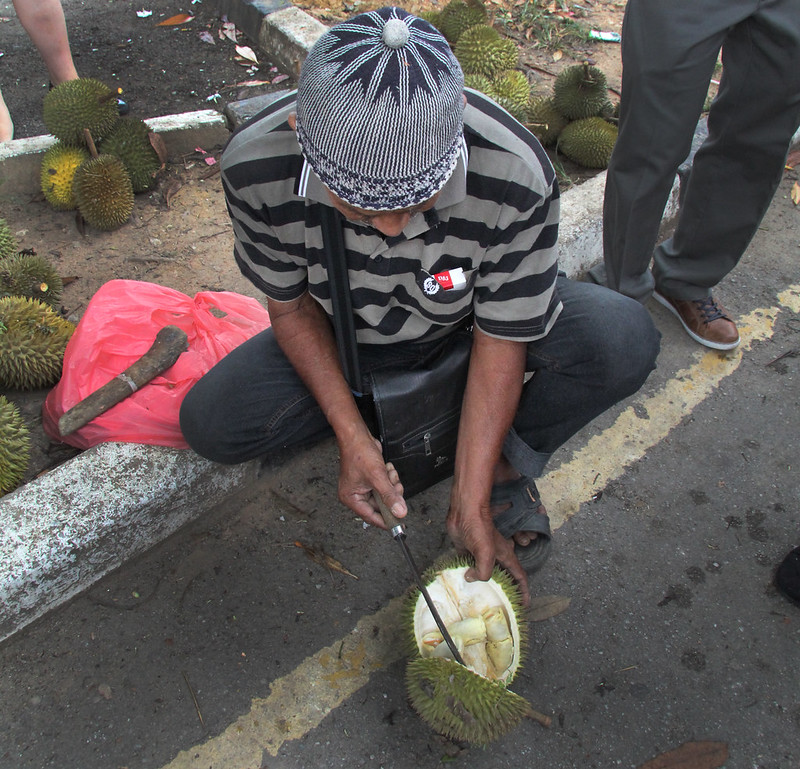 Fun fact number #3: The Durian was not as ripe as hoped, but they enjoyed the flavor nonetheless. 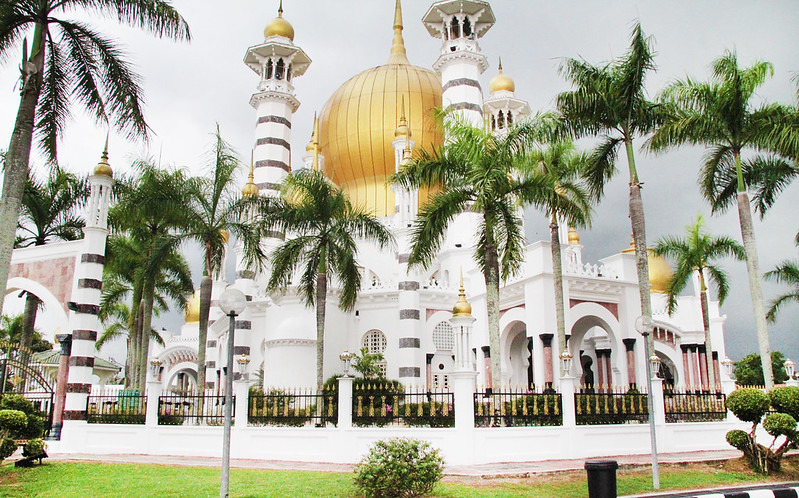 Next was the visit to the Ubudiah Mosque is Perak’s royal mosque, and is located in the royal town of Kuala Kangsar, Malaysia. Ranking high on the list of Malaysia’s most beautiful mosques, the Masjid Ubudiah (or Ubudiah Mosque) stands proudly and majestically with its golden dome and minarets creating a spellbinding sight, from near and afar. 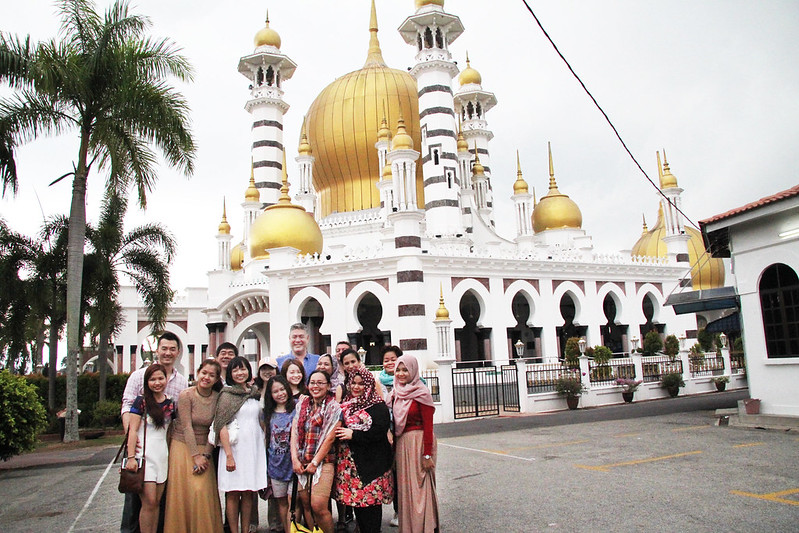 Contest winners took a group photo with Jonathan in front of the mosque before heading back to the train to take off to Thailand.

Back on the train, everyone convened in the Piano Bar. Led by Jonathan, guests enjoyed singing some old school show tunes.

Fun fact number #4: Jonathan loves to sing. He sang several show tunes, including “New York New York” by Frank Sinatra and “Some Enchanted Evening” from Rodgers and Hammerstein musical South Pacific. Although there were no dancing, everyone had a good time and enjoyed the night. 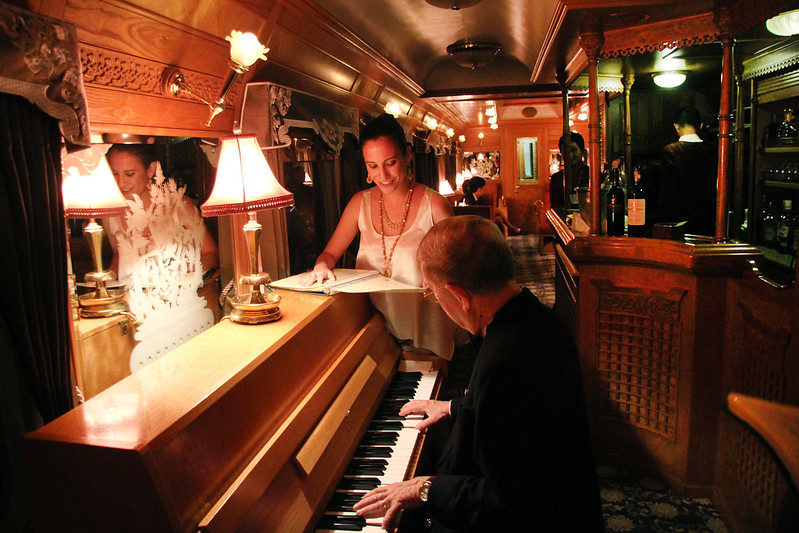 Did you know that Jonathan was also involved in the fashion industry before exploring his passion in cooking?

Fun fact number #5: His expertise in the fashion industry eventually landed him the role of judge on Britain’s Next Top Model for three seasons, and this paved the way for what has since been a successful TV career. He used to be an agent for the likes of Naomi Campbell, Jerry Hall and Liv Tyler!   He is really a multi-talented guy.

Everyone was up bright and early to visit the River Kwai Bridge. The famous bridge and beginning of the ‘Death Railway’ is a poignant reminder of the thousands of prisoners of war and forced labourers and POWs (Prisoners of Wars) who lost their lives in the Second World War during the construction of the railway. The River Kwai Bridge is one of the top tourist attractions in Thailand. 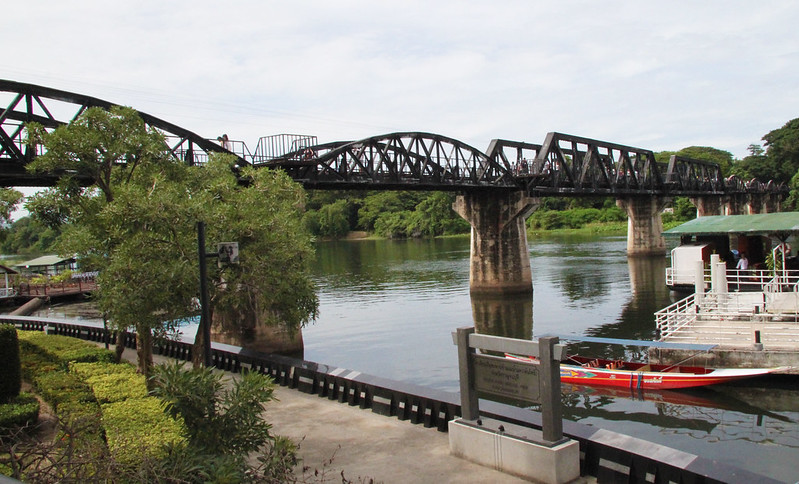 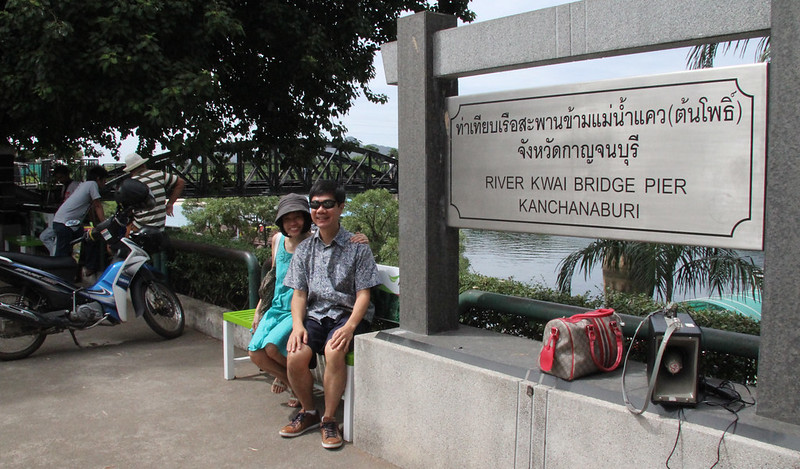 Before departing, everyone stopped to take a group shot by the river and take in the beautiful scenery. 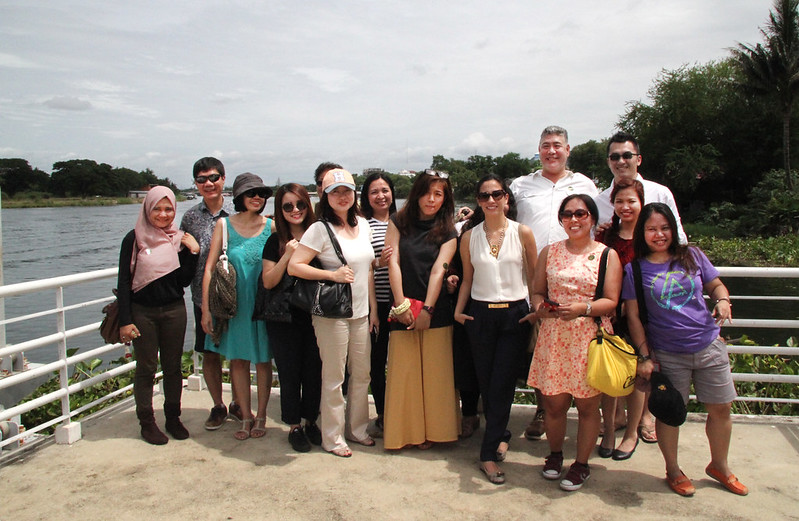 Back on the train, a traditional dancer from Thailand entertained guests as they sipped cocktails before the Jonathan Phang Gourmet Getaway dinner event. 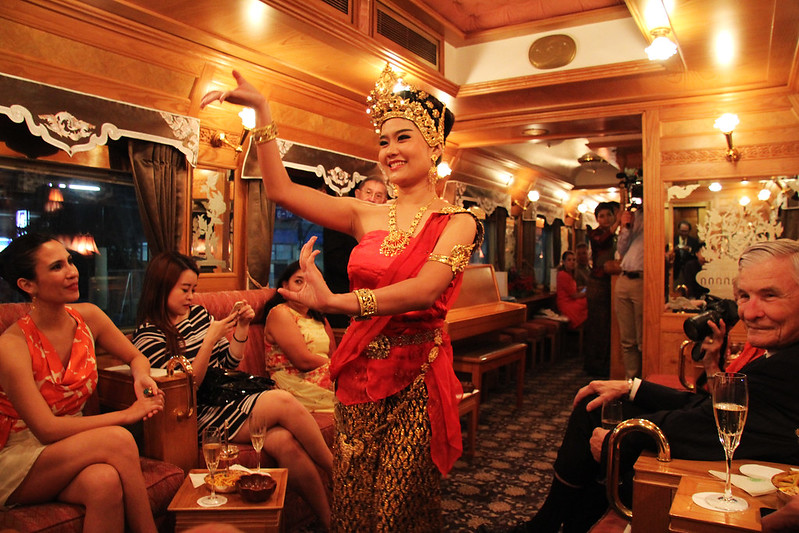 While guests are seated comfortable in the Piano Bar, Jonathan was in the heat of it all, preparing his menu with the skilled chef’s from the Eastern and Oriental Express. 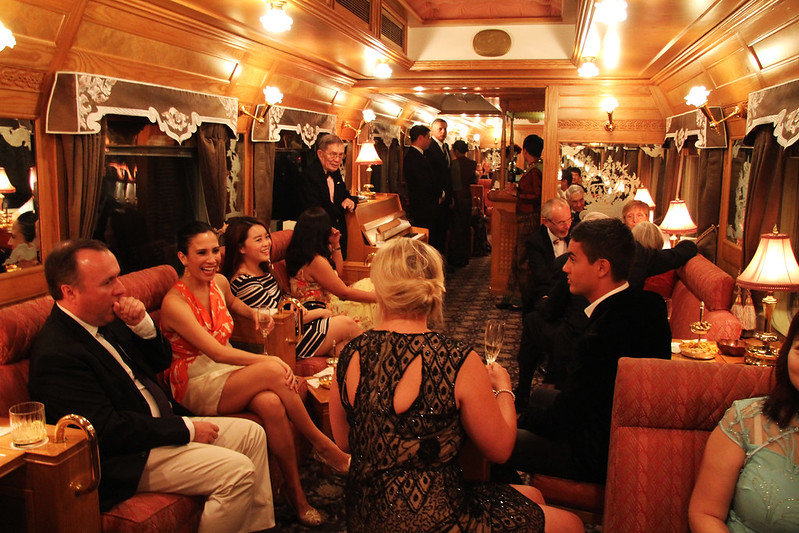 Cooking in a moving train is not an easy feat with minimal space and the constant jolts of the track. The E&O chefs have learned to move to the rhythm of the train are able to maneuver around each other with such ease. 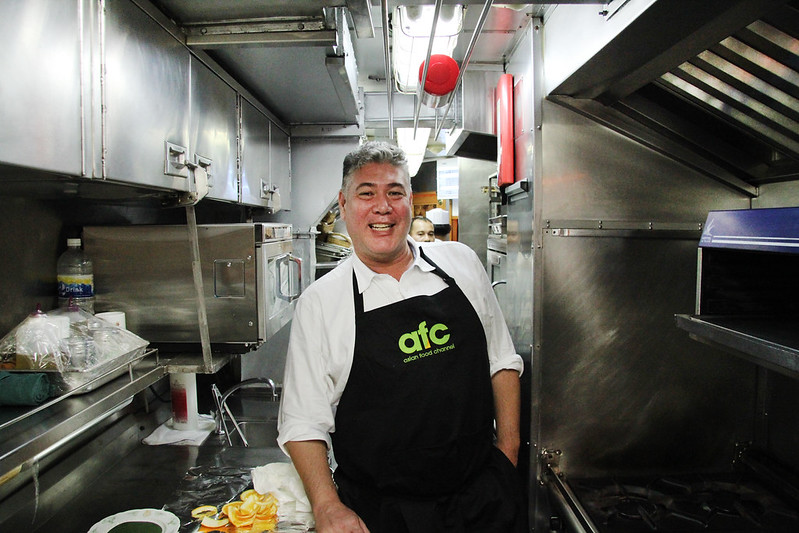 Fun fact number #6: This is the first time that Jonathan cooked on the train! He shared that the train’s kitchen staff are highly skilled in working with the movement of the train (making sure you don’t chop your finger every time it jolts is very important!). 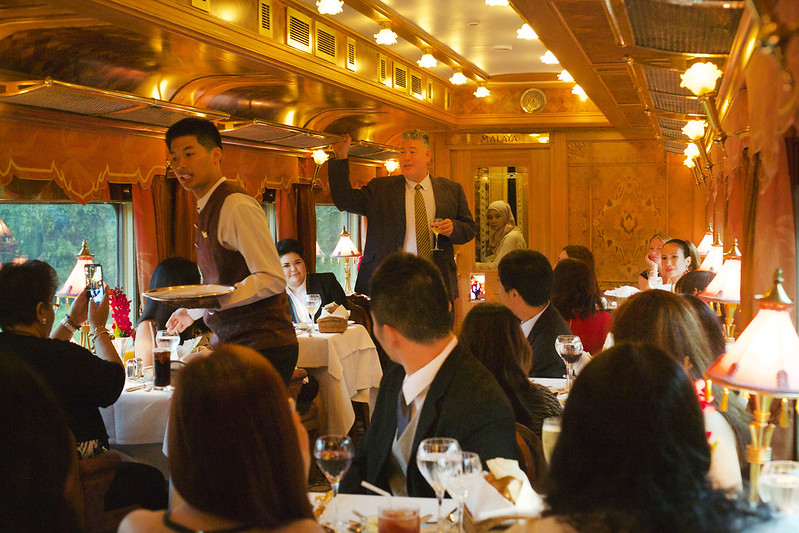 Ready and hungry for dinner, guests’ sat and enjoyed as Jonathan introduced the menu for the night. The dishes that were served were some of Jonathan’s favorite dishes from his childhood and can be found in his award winning cookbook “The Pepperpot Club”.

Main Course: Guests were able to choose between a Beef Pepperpot or Jerk Chicken. Each was served with Rice & Pigeon Peas and Vegetable Curry. 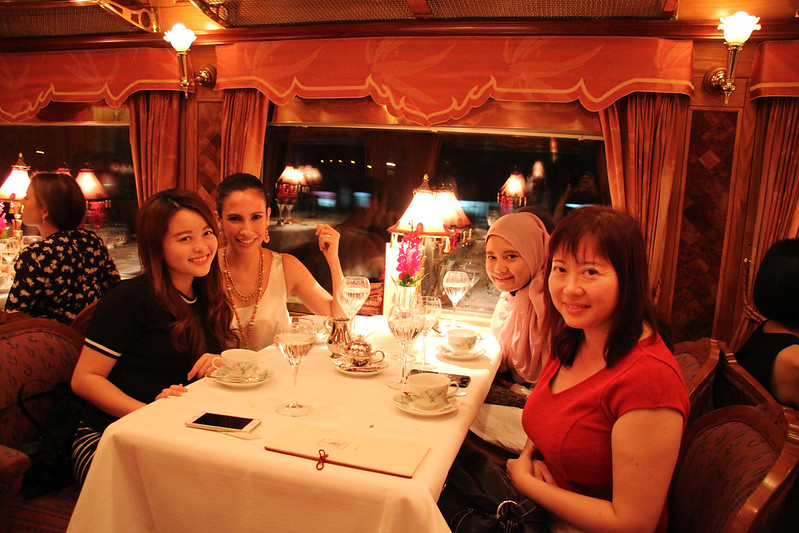 Everyone is stuffed and happy with the five course dinner. To many, it is one of the lifetime experience to enjoy such splendid food in a luxury train.

Fun fact number #7: Travelling by train allows you to experience the country at its core, showing you sights and sounds that other transport systems like coaches or planes can’t.

Everyone should take the opportunity to slow down and just enjoy where they are and what’s around them, away from technology, work and the bustle of a big city. Luxury trains can offer a beautiful and whimsical experience that many can only appreciate after trying it for themselves. And… finally the last train stop, Thailand! The Eastern and Oriental Express team bids good-bye to Asian Food Channel’s winners! Till next time!