The Sydney Harbour Bridge itself is an icon. Not just the icon for Sydney but for Australia. It can be seen in many postcards or calendars or even wallpapers. The bridge is one of its kinds and remains one of the most visited bridges in the world. Every year, a spectacular fireworks show happens on the bridge, thousands will packed the city just to watch the fireworks. Thus, millions other will watch it on TV worldwide and Youtube. 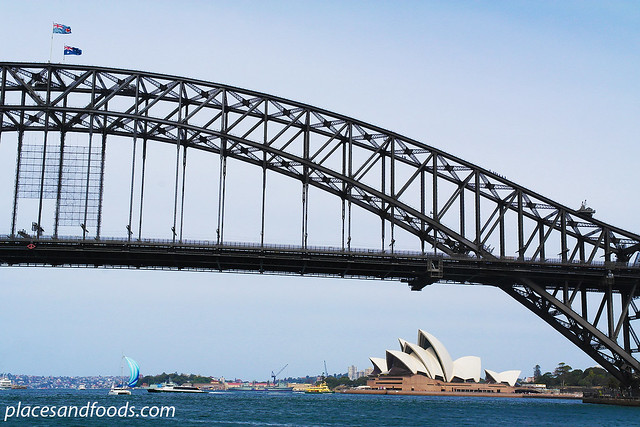 The Sydney Harbour Bridge is a steel arch bridge across Sydney Harbour that carries rail, vehicular, bicycle and pedestrian traffic between the Sydney central business district (CBD) and the North Shore. The dramatic view of the bridge, the harbour, and the nearby Sydney Opera House is an iconic image of Sydney, New South Wales, and Australia. The bridge is nicknamed “The Coathanger” because of its arch-based design.

Under the directions of Dr J.J.C. Bradfield of the NSW Department of Public Works, the bridge was designed and built by British firm Dorman Long and Co Ltd of Middlesbrough and opened in 1932.[3][4] The bridge’s design was influenced by the Hell Gate Bridge in New York. It is also the sixth longest spanning-arch bridge in the world, and it is the tallest steel arch bridge, measuring 134 metres (440 ft) from top to water level.[6] It was also the world’s widest long-span bridge, at 48.8 meters (160 feet) wide, until construction of the new Port Mann Bridge in Vancouver. – Wikipedia.org